Gateway to South America on 26/04/2018 - 22:32 in All categories of countries are, Argentina Mendoza, Argentina-General, Argentine farms, Chile – General, Chilean farms

The Director-General of the International Organization of Vine and Wine (OIV), Jean-Marie Aurand, presented breathtaking information on the collapse of global wine production, assessment of the worldwide harvest, and the state of the overall wine industry at the organization’s headquarters in Paris on Wednesday.

During the presentation, Aurand warned that global wine production collapsed in 2017, with a contraction of 8.6 percent compared with 2016 figures. In fact, global wine output dropped to its lowest levels since 1957, primarily due to poor weather conditions in the Eurozone which slashed production across the entire bloc.

For instance, French winemakers were hit with the worst frost in 25-years, during the 2017 growing season. Vinters reported “widespread damage in Bordeaux, Burgundy, and Champagne, with some losing their entire 2017 crop,” said Wine Spectator.

The OIV released a press release detailing the global state of conditions report: developments and trends. The report notes the “historically low production, buoyant consumption and continuing internationalization of trade.” Wine production totalled 250 million hectoliters in 2017, down 8.6 percent from 2016. All major European wine producers saw tremendous crop losses due to poor weather conditions, which contributed to the collapse of -14.6% of wine production compared with 2016.

Here is the summary of the report:

STABILIZATION OF THE WORLD AREA UNDER VINES AT 7.6 MHA SINCE 2008: 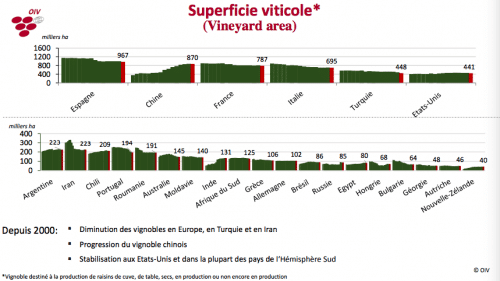 “Global wine production (excluding juice & musts) fell to 250 mhl in 2017, a decline of 8.6% compared with 2016 production. Italy (42.5 mhl) confirmed its position as the leading world producer, followed by France (36.7 mhl) and Spain (32.1 mhl). The level of production remained high in the United States (23.3 mhl) and Australia (13.7 mhl). In South America, after a 2016 harvest very marked by the influence of El Niño, wine production evolved in different ways in different countries. While the production of Argentina (11.8 mhl) and Brazil (3.4 mhl) grew compared with 2016, regaining their average values, Chilean production registered a decline for the second consecutive year, only reaching 9.5 mhl. South African production levels established themselves at 10.8 mhl, equating to a rise of 2.6% compared with 2016.” 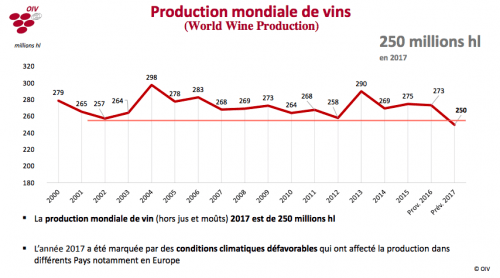 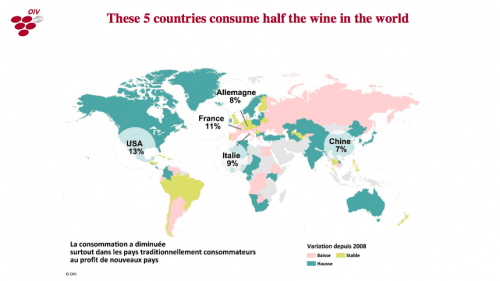 “For 2017, global wine consumption is estimated at 243 mhl, a slight increase in relation to the previous year. After the decline following the 2008/2009 economic crisis, world wine consumption resumed a positive trend. This same upward trend has been seen since 2014. With 32.6 mhl wine consumed in 2017, the United States confirmed its position as the biggest global consumer country since 2011, followed by France (27 mhl), Italy (22.6 mhl), Germany (20.2 mhl) and China (17.9 mhl). The downturn in the consumption of historic consumer countries – France, Italy and Spain – appears to have stabilised, while the consumption of the United States, China and Australia continued to increase. ” 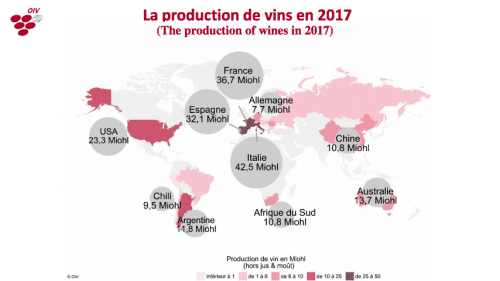 While the global output of wine collapses to levels not seen in more than 60-years, consumption of wine is accelerating throughout the world. A global wine shortage could be around the corner due to an internationally poor harvest in 2017.

Maybe it is time to stock up…