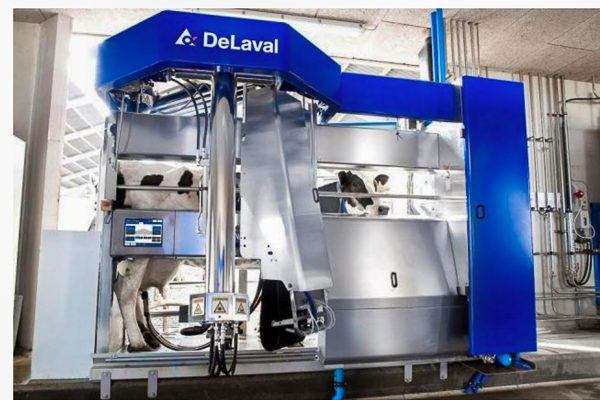 By the start of this year, Agricola Ancali’s 6,500 cow dairy near Los Ángeles, Chile was home to 64 individual robotic milkers.

It was formally announced June 22 in 2016 that Fundo El Risquillo farm owned by Agricola Ancali will become the world’s largest robotic dairy.

The dairy currently milks 920 cows with 16 DeLaval VMS robotic milkers. The first eight robots were installed in October 2014, and another eight were installed at the end of March. At the moment, four rotary parlours milk another 5,600 cows.

When the new barn is completed, there are plans to install 48 VMS robotic milkers into the free stall barn housing cows presently milked in rotary parlours. Once finished, the dairy will milk more than 4,500 cows with robots.

“We are preparing for the future,” says Odrióm Escobar, dairy operations manager for Agricola Ancali.

Escobar has served as the manager since 2012 and he estimates cows in the robots produce 10% more milk compared to the rotaries.

Milking in the 16 robots currently on site averages 5,754 lb. per robot each day. Cows milked in robots produce 99.65 lb. per day and spend 6 minutes 49 seconds in the robot at each milking. Typically a cow will average 2.9 milkings per day and are fed 12 lb. in the robot per day.

Escobar believes the increase in milk production can be attributed to cows spending less time waiting to be milked. He has seen less competition to enter the robots than in the parlour, which has encouraged first lactation heifers at milking. Standing time has gone down for the robotically milked cows helping boost longevity and reduce lameness. Pen capacities are kept at just 95% of what the sand-bedded free stall barns can handle.

Milk tests for the Fundo El Risquillo dairy on March 1 were:

“We’ve been very happy with the results thus far and look forwarded to succeeding with the new project,” Escobar says.

In addition to the production increases and benefits in cow welfare, there will be labour savings. Currently, 140 employees work at Fundo El Risquillo, and for each rotary, there are three milkings with five milkers per shift. A cutback in labor should be expected when the dairy transitions to primarily milking in robots, with only one 40 stall rotary and a small hospital parlour requiring mikers.

The plan is to milk fresh cows through the rotary in their first 30 days of lactation along with cows having non-conforming udders. After 30 days, the cows will move through to the robotic barns. Escobar adds selection for great udder confirmation has helped reduce the number of incomplete milkings with the robots.

Milk from the Fundo El Risquillo dairy goes to the national fluid market in Chile.

Prior to finalising contracts, an announcement was made at DeLaval’s VMS Pro Vegas event in Las Vegas in March where Escobar talked with Dairy Herd Management about the news.