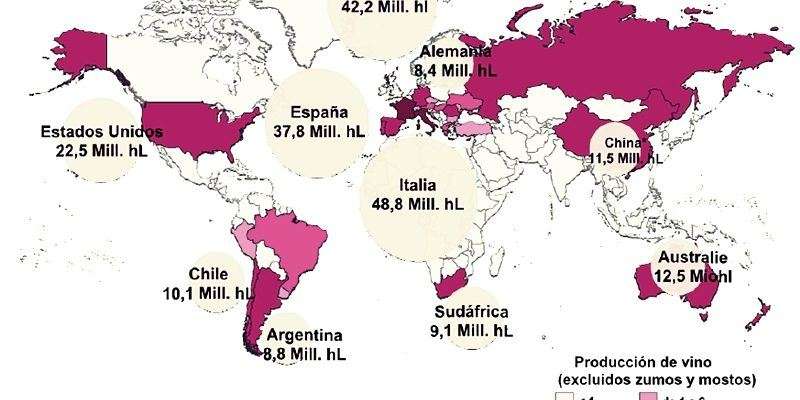 Gateway to South America on 24/10/2017 - 16:28 in All categories of countries are, Argentina Mendoza, Argentina-General, Argentine farms, Chile – General, Chilean farms

Global wine production is expected to fall to its lowest in more than 50 years, according to the International Organisation of Vine and Wine (OIV).

The group blamed the decline on extreme weather in Italy, France, and Spain – the world’s top three producers.Total world output is projected to fall 8% from last year to about 247 million hectolitres.

This could raise prices and dissipate a global surplus caused by a demand slump in the wake of the financial crisis.

According to OIV estimates, Italian wine production will fall 23% to 39.3 million hectolitres.

Levels will drop 19% to 36.7 million hectolitres in France which is predicted by the European Commission to be facing its worst harvest since 1945.

Meanwhile, in Spain, production will be 15% lower at 33.5 million hectolitres.

A hectolitre is 100 litres, equivalent to about 133 standard 750mL bottles.

As a result, small producers hit by several years of small harvests “are facing the very real problem of having to sell family domains because, unless the banks are going to help them in some way, they’re stuck,” according to Rupert Millar, fine wine editor of industry journal The Drinks Business.

For wine-growing regions outside Europe, OIV’s forecasts are more optimistic.

Output in the US – the world’s fourth-largest producer and its biggest wine consumer – is also due to fall by only 1% since reports indicate wildfires struck in California after the majority of wine producers had already harvested their crops.

There was no data available for producers such as China, which produced 11.4 million hectolitres last year.