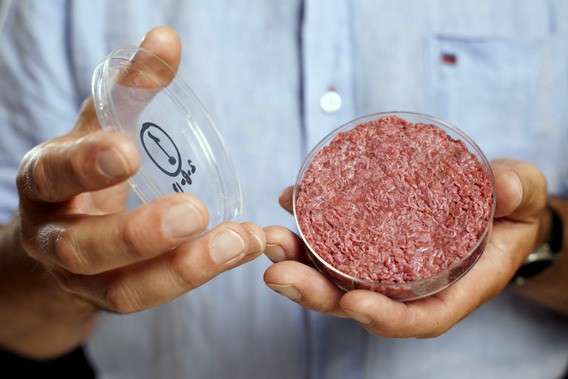 The commercial introduction of plant-based and cultured meat retail products will depend on how the consumer responds to these meat alternatives over the medium term but it is not yet at all clear.

 There’s been a major new initiative for meat alternative products by US-based Tyson’s Foods, one of the world’s largest food companies.
 US fast food chains have begun selling protein-based burgers in addition to traditional hamburgers.
 Potential exists for considerable growth in meat alternatives at the expense of traditional meat products.
 However, meat alternatives are a very new product, thus the consumer and meat industry response is very uncertain.

New Technology in the Meat Chain

New and emerging technology affects all of agriculture – from the field, pasture or milking shed though storage, transportation and, eventually how farm products are designed and packaged to meet consumer demand. Agriculture, unlike some industries, constantly deals with change – some change is incorporated into farming practices, such as the use of GPS or organic farming versus conventional.

Today, technology is appearing at the other end of the food chain which could, over time, affect much of the world’s agriculture. The new technology is not farm-based, but laboratory-based, and is dedicated to replacing the meat we currently eat with a technologically based meat replacement.

Well-respected international management consulting firm A T Kearney sees the evolution of these meat replacements potentially reducing the demand for conventionally-produced meat by over a third over the next 20 years.

However, these meat replacements have been overtaken by cultured meat products. This production process begins with animal cells. These cells are extracted from living animals and processed, using a variety of technologically advanced methods, in a laboratory or factory bioreactors, which create new cells that are blended and restructured into meat products.

These cultured meat products have the sensory profile and mix of nutrients and vitamins that match very closely with those of meat. One scientist commented that when one thinks of meat, they can think of the animals the meat came from or they can think of the functional and chemical characteristics of the meat.

As consumers are faced with new food choices, the use of using traditional names for those new products becomes as challenging as the creation of new technology to make those products. The simple question “What is meat?” does not receive a simple answer.

In the US, two different government agencies, one involved with regulating the use of animal tissues and the other focused on how cultured meat may be marketed, bring in regulatory uncertainty. A similar situation exists in the European Union where the European Food Safety Authority has an array of decisions to make before a product may, or may not, be sold as meat.

The US Cattlemen’s Association argues the best definition of meat is “the tissue or flesh of animals that have been harvested in the traditional manner”. And the question about what is meat has recently been asked, but not yet answered. While the change in the way meat may be produced has been the result of significant technological advancements, there are other factors driving the development of ‘new meat’ besides technology. These include:

 Feeding 10 billion people: According to the United Nations, nearly half of all the plants harvested worldwide in 2018 were used to feed livestock: 1.4 billion bovines, 1 billion pigs, 20 billion poultry and nearly 2 billion sheep and goats.

 Planted-based food to feed the world: If the world’s harvest was used to feed people rather than livestock, it is estimated current food production could feed over 14 billion people.  Environmental: Population growth will increase the global demand for meat and place increasing challenges on land available for farming, on water available for agricultural use, and on conventional livestock production systems.

The world’s meat value chain – farmers, transportation, livestock feeders, processing industry, and retailers – is estimated to have a total value of USD$1.9 trillion. According to the UN, pork is the most widely eaten meat in the world, accounting for over 36% of the world’s meat intake. It is followed by poultry and beef with about 35% and 22%, respectively, with sheep meat consumption at 7%. Indicative of the growing trend toward exploring ‘new meat’, is US-based Tyson Foods, one of the world’s largest food companies and a recognized leader in protein.

They have been involved in meat alternatives for 3 years and recently announced their first offering of plant-based and blended meat products. One of their products is advertised as being “made with pea protein isolate and plant fibers” and a second as a blend of “Angus beef and plants.” Tyson is the largest company to enter the fastgrowing alternative meat market. Another US company to enter the alternative meat market is fast food retailer
Burger King. They recently announced they are selling “The Impossible Burger” which, according to their website, is made from soy protein, potato protein, coconut oil, sunflower oil, and heme (iron-containing molecule).

Other fast-food retailers have also joined the move to sell meat alternatives and there have been reports that initial consumer demand has been strong which has been a challenge for alternative meat companies to produce enough ‘burgers’ to meet the recent surge in demand.

Recently, a New Zealand based pizza company included a meat substitute produced by Beyond Meat in its pizza. It is unclear if the initial buying interest will continue strong or if consumer interest will fade as the novelty of such products declines over time.

Looking forward 20 years, the consulting company sees conventional meat demand declining, with consumer consumption of vegan meat and cultured meat reaching 60% of total global meat consumption and exceeding the 40% of total demand met by conventional meat. The challenge to estimate the potential impact of meat alternatives on the current meat value chain is the fact that, as yet, consumer demand for meat alternatives is still an unknown.

Simply because new technology permits the production and sale of a new product, for it to be successful, it must satisfy a consumer need. It is not yet apparent if a large number of consumers have a need for meat alternatives. Adjusting to new technology can take time.

The ultimate judge of commercial acceptance of new technology is not government regulatory agencies, but consumers. And consumers may reject a product created through new technology rather than embrace it. While the demand for recently introduced new meat substitute products is stronger than expected, the sales are dwarfed by traditional meat sales. It not yet clear if current consumer interest is simply curiosity over a new product or represents a more substantive change in consumer protein preferences.

It is also not yet clear if consumers will adjust their diets to products which are as non-traditional as cultured meat and other meat alternatives.

Consequently, the arrival of a new competitor to traditional meat creates an environment that all members of the current meat value chain – from those involved in livestock feed production through to retailers – must watch closely.