Why Urban Farming Is the Future 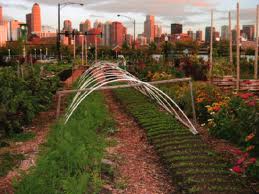 Why Urban Farming Is the Future

Dr Robert Biel is an author and academic, who works for University College London and has written about sustainable agriculture. More than that, he practices what he calls ”experimental agriculture” in his own allotment and with his students. Biel believes that we are coming to a crisis of agricultural production, and we need to have more ‘Food Sovereignty’, which he defines as greater autonomy over our own food production. He would like to see more local food production and less reliance on imported and fossil-fuel produced foodstuffs (a famous study by Professor David Pimentel of Cornell University, found, for example, that for every 1 calorie of meat we eat, over 8 calories of fossil fuel input – in the form of natural gas for fertiliser and oil for agricultural machines and transportation, refrigeration, etc. was needed).

Biel describes what first got him interested in food growing: ”In my academic work I was looking at traditional social systems, and I saw that to understand them fully I needed to know about their agriculture and relationship to the land. After a period of time I moved on from the purely theoretical and started growing things – experimenting with ‘No Dig’ urban agriculture using traditional techniques, which were low in the amount of labour needed. I found that a high input of knowledge compensated for a lower input of physical work. It is best to avoid interfering too much and allow nature to do as much as possible.” He found using these methods he could produce nearly enough vegetables for one person on 250 square metres of land.

Biel takes inspiration from what he calls self-organising systems. Drawing on the experiences of Cuba during its ”Special Period” in the 1990s, when the former Soviet Union cut off supplies of fossil fuels, forcing the Cubans to institute radical reform of agricultural practices, and Argentina during the economic crisis of 1999-2002, he notes how these have influenced the Transition Movement in the UK and elsewhere. Cuba had already investigated moving towards a resilient, organic, localised agriculture and away from the Soviet model of large farms with a lot of fossil fuel input, but it needed the crisis to move this from a theory into reality – aided by Cuba’s centrally planned economy, where this could be implemented by government decree. In contrast, Argentina was what Biel calls an Emergent System – where a radical grass-roots social movement grew out of the chaos and self-organised by taking over factories, picketing banks and creating and distributing food itself.

Both of these movements promoted urban agriculture in spaces in the city, including abandoned lots, rooftop farms, or any area that is open to cultivation.

In the UK and USA there is the similar example of wartime expedients, where people cultivated allotments and produced local backyard food to provide a substantial amount of the food necessary for the nation, but this is now something of a dim memory as World War 2 fades from lived experience.

Biel notes that one of the main outputs from a crisis is often co-operation. Behavioural studies show that under stress, humans often pull together. We have just seen that in the responses to the recent tragic events in Japan. As the depletion of fossil fuels continues, countries will have to make changes in their agricultural production systems. Biel believes that by growing some of our own food we can aid the transition to a lower-carbon way of life. ”The huge urban population is not producing food and this puts an intolerable pressure on the rural side of society which has to produce most of the food.”

He notes that the increase in the costs of fossil fuels including fertiliser have made US commercial farmers look to more eco-friendly methods like green manures and No Till growing purely because of the pressures of reduced profitability caused by high fuel prices. He acknowledges the difficulties in moving from a fossil fuel orientated agriculture to an organic one but maintains that it can be done.

Dr Biel’s book The New Imperialism: Crisis and Contradictions in North/South Relations is still available and his new book ‘Entropy of Capitalism’ is due out later this year, published by Brill in Leiden.