Why Latin America is the Middle East of Biofuel 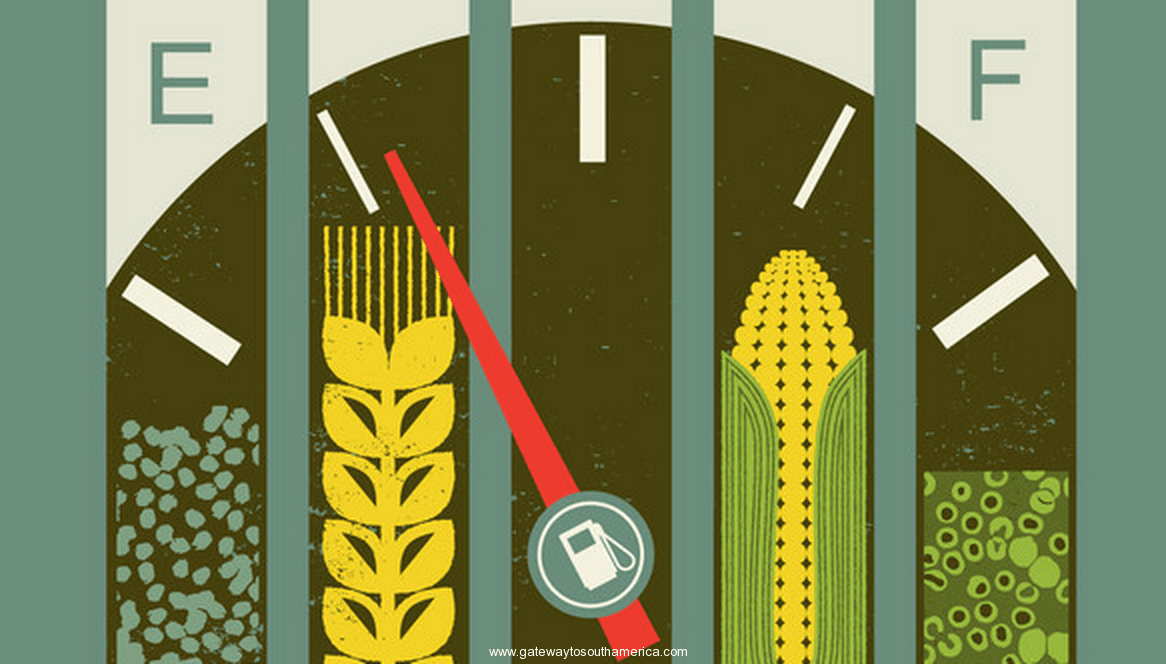 Latin America has lots of natural advantages for the coming energy transition. It already has the greenest power matrix in the world. While having the planet’s largest reserves of copper make it a key provider for international electrification programmes. Yet transport is its Achilles heel. Just 1% of Latin American transport is fuelled by clean energy. So, while more than half of its electricity comes for renewable sources, once you factor in the heavy dependence on oil and gas for moving people and goods around the region, then the renewable share of its primary energy is just 5%.

Latin America will only make significant progress in its energy transition when it manages to fuel more transport with renewable energy. One solution will be electric vehicles (EVs). However, as mining experts reveal elsewhere in this report, copper supply will be unable to replace every existing internal combustion engine with an EV by 2050. That’s even more true for aviation, where electric planes are nowhere near ready for commercial passenger flights. That means biofuels will also play an important role. Latin America is already the world’s largest biofuel producer and, more importantly, it has ample room to increase production. A UN report found that thanks to abundant freshwater and vast stretches of unused farmland, Latin America’s has 42% of the world’s potential increase in agricultural production.

When Brazil’s largest biofuel producer, ECB Group, starts operations in Paraguay it will cement Latin America’s leading position in the industry. That’s because the Paraguayan project, Omega Green, is Latin America’s first ever second-generation biorefinery. Omega Green, which opens in 2024, will produce HVO, a type of biodiesel, and SPK, a bio aviation fuel. European oil majors, Shell and BP, have already signed offtake contracts for 90% of production, underscoring the demand for low carbon solutions to the transport problem. BP has pledged to be carbon neutral by 2050 and recognises that biofuels can help it get there. Countries with ambitious environmental targets, such as the UK, will eventually make the same decision. And it’s the technological advantages of second-generation biofuel – from its feedstock to its uses – that will help convince them.

By using an energy-intensive process of applying hydrogen to organic matter, second-generation biofuels can produce a wider range of fuels. For example, aviation fuel that allows biofuels cut emissions that electrification simply can’t reach. Second-generation biodiesel also has more uses than its predecessor, as it is a ‘drop in’ fuel that can be placed in existing internal combustion engines and work without any modifications. Indeed, you could power your car will 100% HVO or mix any percentage with your usual diesel.

Biofuel has many advantages over electric vehicles. You don’t need to build new infrastructure, or buy costly new busses, you just put our fuel straight in…

That flexibility – in both feedstock and use – makes biofuel an essential part of the fight against climate change, says Erasmo Battistella, CEO of ECB Group. “Biofuel has many advantages over electric vehicles. Take London for example, with HVO you could replace the dirty diesel fuel, with its polluting emissions, overnight. You don’t need to build new infrastructure, or buy costly new busses, you just put our fuel straight in.”

You would expect a biofuel producer to talk up the benefits of his product, but his assessment is confirmed by the experiences of one of Latin America’s leading proponents of electrification, Irene Cañas, President of the Costa Rican Institute of Electricity. Cañas, who oversees the most renewable electricity system in the world, plans to replace Costa Rica’s existing fleet of diesel buses with electric buses. “It will begin with a pilot scheme, using three electric buses donated by Germany. That will begin this year, as we test the buses on different routes to evaluate their performance. The scheme has been delayed by the pandemic because the health restrictions mean that buses can only carry half the passengers, which has cut the revenues for bus companies and made them less willing to invest in electric vehicles.” With proven biodiesel there is no need for performance tests. But more importantly, it doesn’t require costly equipment swaps.

Second-generation biofuel’s feedstock flexibility is another big plus. One of the biggest biofuel criticisms is that it reduces farming for food production. Yet with these new biofuels, it’s not true, says Battistella. “The beauty of second-generation biofuels is that they can use such a wide range of feedstocks. We are keen to develop a diverse supply of different crops. And that’s why biofuels will be a success around the world. Whether it is a palm in Indonesia or canola in Canada – biofuels can always be made with local plants. And by planting more crops we actually increase the food supply. Because the best parts can be used for food and whatever is left as feedstock for biofuel it can also come from animal waste, rubbish or agricultural by-products.”

Another supposed flaw with Latin American biofuel is that it will deforest parts of the Amazon. Yet Alfredo Mordezki, manager of the Santander Latin America Investment Grade ESG Bond Fund, says the Amazon is so sensitive that firms who damage it will have restricted access to international capital markets. “Some may think of Brazil as this terrible polluter that is deforesting the Amazon, but within the country there are many companies with great environmental practises. Take Brazil’s pulp and paper companies. People assume that they are linked to deforestation but actually they are keen to distance themselves from the Amazon because they know how damaging that can be to their reputation. As a result, most of these companies are making efforts to be more transparent, disclose more information and have ambitious plans to become greener. A lot of the worst environmental damage is committed by illegal groups in Latin America, for example with informal mining. But if we can funnel money to the best listed companies then it should drive change. A Brazilian soy producer that recently issued bonds has independently certified that all of its land, and that of any suppliers, is not coming from a deforested part of the Amazon. That has raised the bar for any further soy companies looking for investment.”

That assessment is backed up by Battistella. “For us to sign the agreements with BP and Shell we had to certify the environmental impact of everything from planting the raw material to how the final product would be consumed.” That’s why “our pongamia is being produced in the vast, barren Chaco region of Paraguay. This is not land that has been deforested for our production, but farming land that we are reforesting for our project.” Indeed, Omega Green has already announced that one-third of its feedstock will be coming from Pongamia, a tree that doesn’t require fertilizer, lives for 100 years and has a low carbon density. “The fuel you produce actually has a negative carbon density score. Imagine that – you are supplying airlines with a fuel that actually sequesters more CO2 than it produces.”

Indeed, Battistella feels that biofuel is subject to far more environmental scrutiny than EVs. “The supply chains for a lot of the metals used in electric cars are not very clean, with child labour involved in mining some of the metals. The process for making batteries can also have a harmful environmental impact.”

The final criticism of biofuel is that it doesn’t produce enough output to make a significant impact on climate change. Battistella says the numbers from Omega Green prove otherwise. “Pongamia is so productive that just 120,000 hectares will produce enough feedstock for 1/3rd of our needs. With 400,000 hectares it could cover our entire production. That might sound like a lot of land to someone in London but the Chaco region has 24 million hectares.” Again, his words are backed up by the fact that BP and Shell are using biofuel to reach their ambitious carbon neutral targets. Moreover, the success of Omega Green can be replicated throughout the region, says Battistella. “Even though Brazil is the leader in Latin American biofuels, we also see widespread consumption and production elsewhere in the region. Colombia, Paraguay, Uruguay, Argentina and Peru are all using and making biodiesel and ethanol. Latin America could increase biofuel production tenfold just by applying new technology and planting more feedstock.”

Look back around 150 years to the last energy transition, when oil began to replace coal. Even though oil became dominant coal is still being used today…

However, it is true that biofuel won’t be able to replace oil on its own. Current global oil demand is around 100 million barrels per day, while Omega Green’s total production will be 20,000 bpd. Even if you build 1,000 Omega Greens, you would only cover a fifth of oil demand. So, the transition will require a combination of EVs and biofuel. Many investors think of them as mutually exclusive, when in fact they are complementary.

“Look back around 150 years to the last energy transition, when oil began to replace coal. Even though oil became dominant coal is still being used today. We will see something similar with this energy transition – oil will still be used for the next 70 or 100 years. And that’s OK because to limit the impact of climate change, we don’t need to replace 100% of oil, we just need to reduce CO2 to historical levels. Oil is built-in to a lot of the technology we use so it’s impossible for us to ignore it completely. Moreover, rising energy demand means that we will need it. For example, cargo volumes are expected to triple between now and 2050. But we need to be intelligent and use biofuels to the best effect. One example is aviation, where electric planes are not viable at the moment and hydrogen is too dangerous to carry people. Another is the city centres where people are forced to breathe in poor quality air, that is like smoking a cigarette each day.” Biofuel’s advantages in cities make it a perfect solution for Latin America, which is the most urbanised region in the planet. Moreover, biofuel doesn’t just replace oil in the petrol stations. By-products, such as bio naphtha, can be used as feedstocks to make green plastic.

Ultimately the energy transition is such an ambitious target that countries will have to use all of the tools at their disposal. Latin America’s natural endowment mean that it can increase its biofuel production exponentially, without harming the environment or food supplies. Meanwhile, biofuel’s competitive advantages are well-suited to the region’s needs. Omega Green may be the first second-generation biofuels plant in Latin America but it won’t be the last. It is paving the way for a biofuel boom that will help clean the region’s transport sector.