WHY INVEST IN RIO HILLS ? Yes it is close to Rio de Janeiro but there is more

Gateway to South America on 11/07/2013 - 07:51 in All categories of countries are, Brasil Residential, Brasil-general en 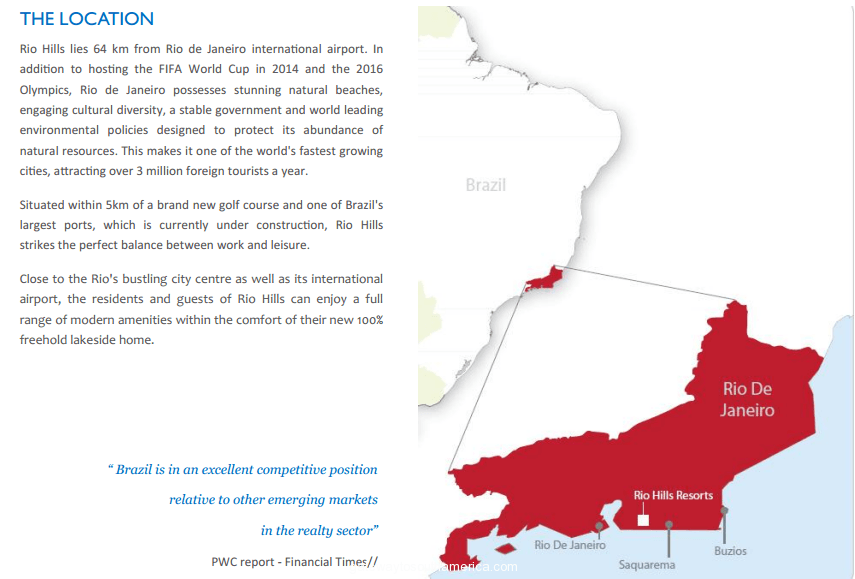 Rio Hills Lake and Country Resort is ideally located surrounded by natural beauty with views of mountains, lakes, beaches and the sea.

•   Multi-award resort with wealth of facilities and a boutique hotel
•   Located in the picturesque Lakes region of Rio de Janeiro
•   World renowned Architects
•   Less than 5km from planned R$5.4 billion Jacone Megaport
•   45 km from the $8.5 billion Petrobras facility
•   Excellent re-sale/rental potential with large numbers of executives moving to the area
•   Golf Course (lessons available with PGA Brazil Professional Instructors) within 5km
•   Around 60 minutes to downtown Rio and International Airport
•   Ideally located for those travelling to downtown Rio
•   Helipad, executive airport, waterfalls and horse-riding all within close proximity
•   Developers and Architects from all corners of the globe are turning to this area in anticipation of the enormous economic expansion

Nearby Maricá is one of the first towns to benefit from the royalties of the recent oil pumping being conducted offshore from Rio’s coastline.

Master developers and architects from every corner of the globe are turning to this picturesque corner of Brazil buying up millions of square meters of land in anticipation of the enormous economical expansion that the oil discovery has brought to the area.

Tourists are attracted to Rio by the picturesque white beaches which include the world-famous Copacabana and Ipanema beaches, the annual Rio Carnival and the stunning Sugar Loaf and Corcovado mountains, the latter being home to the instantly recognisable “Christ The Redeemer” statue.