Why does Argentina have a dual currency ? The Blue Rate

In Argentina, where about a dozen different exchange rates overlap, the government is creating ever more rules about who can access dollars and for what, making an already vexing system more complicated in a bid to delay the inevitable devaluation.

Is the Blue Market Really a Black Market?

In a standard economy, money is money. Whether you carry a briefcase of crisp hundreds into a bank in New York or a sack filled with small bills into a branch in Nebraska, the deposit to your account will look precisely the same. The commodity (money) has a single value – the amount printed on the bill.

Not so in Argentina’s blue dollar market. New hundreds will always command a better exchange rate than old, wilted twenties and tens, which are more challenging to move or pass along inconspicuously. Like other commodities, the volume also matters. On a recent afternoon on Lavalle street, while DolarBlue.Net listed the buy rate at $280, per 1 USD arbolitos offered anything from $31,700 for US$100, which rose to $32,00 if you were willing to sell US$1,000 or more in a single trade. 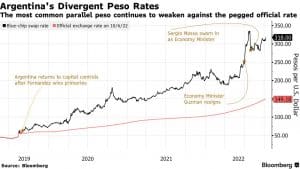 Likewise, previously tourists short on pesos in Patagonia, or the far north, will be shocked if they are used to rates in Buenos Aires. One money changer I visited in a small southern town looked up the official rate, then the blue rate, and then split the difference. I refused. He just shrugged. You can set your own terms when you are the only game in town. This has recently changed, allowing tourists to get the blue rate on their credit cards.

Currency possesses another quality unique among illegal commodities – it does not always remain contraband. A kilo of cocaine will always be cocaine. Still, blue dollars find various creative ways to return to circulation as legitimate pesos (a laundering process known in Argentina as blanquear). Many property transactions, for example, are documented as a mix of dollars and pesos – only the dollars change hands in reality. Still, it is convenient for individuals or companies to justify their spending of pesos earned on the blue market.

As a result, though blue dollar transactions support legitimate activities, the more you look, the more it appears to work like a traditional black market.

A brief glance at the graph shows that something curious is afoot. The official rate has shown a slow upward trend. The blue looks more like the foothills near Bariloche. How can the official rate stay so serene while the blue has become untethered?

Let’s return, for a moment, to the basics: The blue dollar rate exists because Argentines want a commodity they cannot purchase legally, except under heavy restrictions caused by a shortage of dollars in the economy caused by reckless government overspending. This is where all black markets, from dollars to drugs, get their start.

The official rate is an artificial setting reflecting the administration’s priorities while avoiding a complete economic crash or starting a revolution. Along with benefits, there are side effects – distortion of the economy and the problem of foreign reserves, among others.

The blue rate is a complicated amalgam of economic forces. An interesting analysis from the University of Mississippi employed a statistical model to break down the blue rate into its component parts (restrictive government policies, seasonal variations, etc.), controlling for all other factors. According to this analysis, the author calculates that the first 4.6% of the brecha (the gap between the official and parallel rates) is a risk premium: the cost of operating in an illegal market.

Another 56% of the gap, by the same method, is the result of five government policies used by the current Peronist Kirchner-controlled state. These are: limiting dollar purchases for saving (11.3%), limiting allowances for travel (12.1%), mandating that foreign pensions are paid in pesos (9.4%), adding surcharges to foreign credit card purchases (16.4%), and further exchange rate controls (7.1%).

Add another 7% to account for the strength of the dollar worldwide. (This is the dollar amount that has risen against the euro in the last three months. By contrast, the official rate has only risen 3% against the dollar over the same period, a signal of active rate management.)

This still leaves more than 30%, much of which will be due to pessimism over the economy, the spectre of high inflation, and new restrictive policies.

As noted above, the ‘Contado Con Liqui’ rate is another check on the blue dollar rate. This rate connects to the real world since it is set by bond sellers and is used in actual transactions daily. Many observers see this as one of the main channels for government influence on the blue market. If the parallel rate rises too high, government-associated organisations could sell more bonds, depressing the price and injecting more dollars into the market.

There is one more factor: speculation. Typically, people buy dollars for investment, travel, business deals, or to hide income from AFIP ( tax authorities ).

However, if the blue dollar is on a tear, people will convert pesos to dollars as a speculative move – the inverse of a stock market dynamic – pushing the higher rate. The Casa Rosada sees this as the central issue: Cabinet Chief Juan Manzur has regularly spent part of his daily press conference approaching speculators and promising action against them.

Critically, one item that does not seem to affect the rate in any assessment is supply. Scarcity does not appear to be playing a part. Whether the dollars come from big banks, as the government suggested, or money parked offshore by rich Argentines or both, the amount in circulation always seems adequate to meet demand.

This nonsense will continue until the peso is floated.