FACTA Regulations- Why Americans are giving up there Citizenship 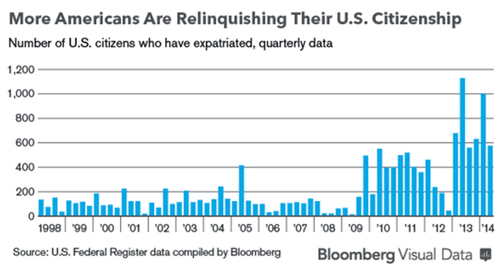 By Martha Myron
With the announcement last week from one of our major local banks, HSBC Private Bank Bermuda that they would no longer support accounts owned by US citizens, Bermuda residents with dual citizenship with the United States, and green card holders living in Bermuda, the concerns elucidated in many of my earlier columns regarding US tax compliance have come to pass.

Fortunately, Butterfield Bank Private Bank confirmed this week that they will be taking queries from clients meeting their strict know your client compliance rules.  It is estimated that more than 5,000 US citizens, Bermuda residents with dual citizenship with the United States and green card holders reside permanently in Bermuda.  For other US citizens in other countries there is Little to No Place Left to Turn. There are then, for thousands of ordinary people, living ordinary lives outside the United States little or no alternatives remaining to place an investment, purchase life insurance, accumulate a pension, or even deposit funds and pay everyday expenses.

International financial planning for these individuals is now an oxymoron.

How can you plan when you cannot invest anything for the future, but may have to live literally on cash under the mattress? Regrettably, these lonely US citizens are finding out what it truly means to be called the ugly Americans.
The effect on loyal American individuals and their families, many of whom have lived abroad most of their lives, is absolutely disastrous.

FATCA legislation, which was buried in the HIRE Act passed by Congress in 2010, becomes effective in January 2013, only 18 months from now. But because its implications are so far-reaching and complex, the US Treasury Department has
not yet issued regulations on how to implement it, leaving banks, insurance companies, pension funds and mutual funds around the world in limbo as to how to put into place the onerous provisions of the new law.

The goal of FATCA was to identify US citizens with undeclared assets hidden in overseas bank accounts, said Jackie Bugnion, ACA director.  Although ACA applauds this goal, the way this new law is structured is totally disproportionate and unworkable – the equivalent of using a bulldozer to destroy an anthill.  If truth in advertising laws had to apply to Congress’s handiwork, the term FATCA would stand for Full of Adverse Tax Consequences for Americans, said Pete Sepp, executive vice-president of NTU.

Under FATCA, any institution in the world that holds US securities must declare all US account-holders directly to the IRS, or face a punitive 30 percent penalty on any transaction in those US securities. FATCA creates an
administrative nightmare for banks overseas, and a double reporting burden on both American businessmen operating abroad and overseas American residents who must have foreign bank accounts to function.

The law has already had highly negative consequences for the US and its citizens overseas, even before it has gone into effect. Some banks overseas have closed the accounts of US citizens, and have sold off all US holdings, rather than comply with the heavy administrative burden of FATCA. ACA points out in the report that total foreign
\ investment in the US currently exceeds $21 trillion.  The sale of even part of these holdings would have a devastating effect on US markets, and consequently on jobs in the US, on US exports, and on the US economy overall.

If even a portion of this investment is lost – as Japanese, Australian, and European banking associations have already threatened to do – it will far exceed any sum, and far less than the $100 billion fantasy, that Senator Levin expects to collect as a result of this ill-conceived legislation.

The US crippling trade imbalance and ongoing debt crisis should be a wake-up call for government officials to stop hindering America’s competitiveness overseas with bills such as FATCA and the Stop Tax Haven Abuse Act and employ
fair tax policies that track tax evaders without hurting law-abiding citizens.