What now for South America and Venezuela as the pink tide recedes? 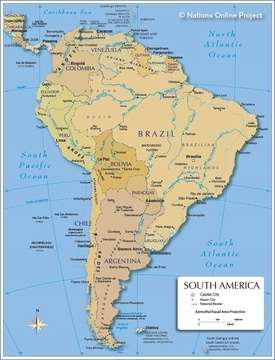 While nearly two decades of ideologically driven economic mismanagement has turned Venezuela from a relatively wealthy oil state into a Zimbabwe-like basket case, Chile has mainly stayed the course, politically and economically, just to the right or left of the sensible centre.

Since the restoration of democracy in the late-1980s, this long, thin ribbon of a country has largely avoided the wild boom-and-bust pendulum swings that have characterised much of the continent’s stop-start crawl towards developed world status since the so-called “lost decade” of the 1980s. 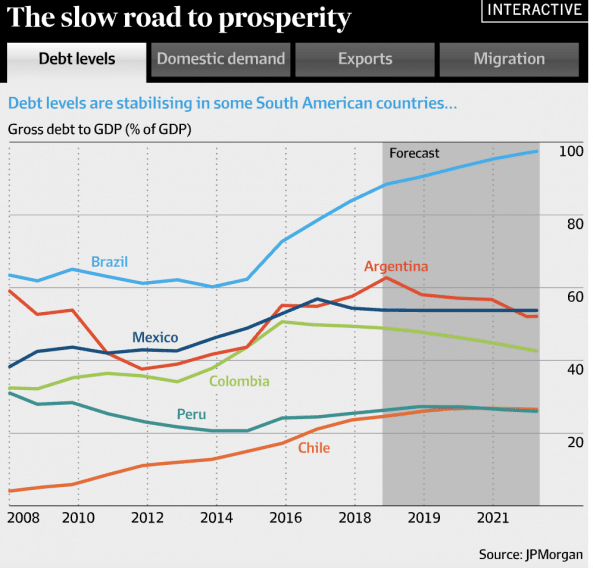 Few look back fondly on a time in South America when the end of authoritarian rule across the region left exposed ravaged, outdated economies, short on capital and weak in infrastructure, education, health and governance.

In 1988, for example, Latin America’s gross product grew by less than 1 percent, while per capita income, down more than 1 percent, had shrunk to 1970s levels. Investment plunged from 25 percent of regional product in 1978 to just 16 percent in 1987.

Back then, inflation was out of control in economies as varied as Brazil, Peru, and Nicaragua. Foreign debt stood at USD 420 billion, compared with less than USD 100 billion in 1980, and debt service requirements ate up nearly one-third of the region’s export earnings.

Thirty years later, China’s appetite for the region’s metals, energy, and agriculture, as well as better fiscal and monetary management, means the Venezuelan disaster is an aberration on the South American continent. 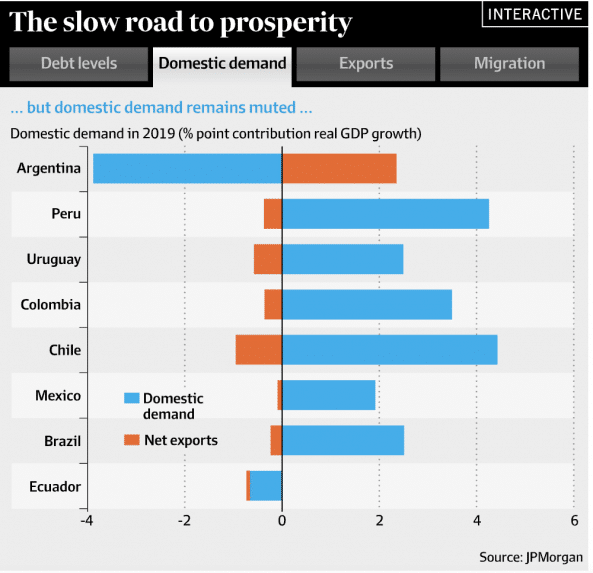 Even Argentina, which last year flirted with another economic meltdown, is on the road to recovery, with inflation high but constrained and a slow climb out of recession possible in 2019.

For the region, while most pundits expect growth this year to be unremarkable – at an average 1.8 per cent compared with a paltry 1.3 per cent last year – current account repair, solid inward investment, a widespread infrastructure, energy, and technology push and a political shift to the right in most major economies should guarantee a year without too many market shocks.

Chile, Peru to lead the way

Metals-rich Chile and Peru will lead the way, with GDP growth of 3.5 percent and 3.9 percent respectively, according to some private sector estimates.

“Latin America’s aggregate current account balance swung from a surplus before the global financial crisis to a large deficit in the period leading up to the collapse of the commodities supercycle,” wrote JPMorgan’s Latin American team in a report last month. 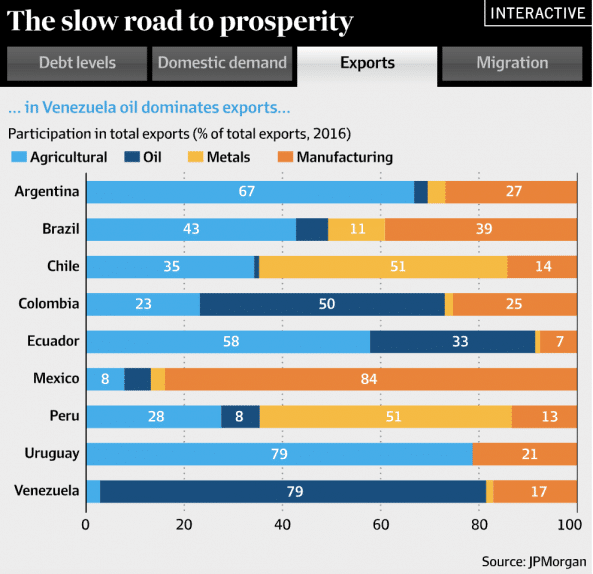 Brazil’s President Jair Bolsonaro with first lady Michelle Bolsonaro.Most Brazil-watchers expect the country’s patchwork Congress, along with the market and political-savvy technocrats enlisted by the President himself, to temper Bolsonaro’s most extreme instincts.

“Since 2016, however, the region’s current account deficit has collectively moderated, even as foreign direct investment has remained elevated and stable.

“This dynamic has underwritten resilience in much of the region, but the country breakdown matters, as Argentina can attest in 2018.”

Indeed, while no Venezuela, Argentina’s interventionist policies, capital flow chaos, widespread corruption and wrong-headed fiscal and monetary fixes over the years have ensured a wild ride for investor and resident alike.

From the world’s farm in the booming post-war years, to No. 81 on the World Economic Forum’s global competitiveness ratings today, Argentina provides a constant reminder of what happens when a commodity-rich country is chronically mismanaged.

Its last golden era was the 1990s under President Menem and the so-called “Washington Consensus”, when neo-liberal market reforms, underpinned by a one-to-one currency peg with the US dollar, gave Chile’s neighbour a veneer of modernity and prosperity.

Despite a massive bailout from the International Monetary Fund, the economy collapsed and Argentina spectacularly defaulted on about USD 100 billion in foreign debts in 2001 as the peso plunged by two-thirds in a matter of days.

Brazil soon after had its time in the sun under President Luiz Inácio “Lula” da Silva, a left-winger who successfully combined market-friendly reforms with a massive boost in social welfare and infrastructure spending aimed at lifting millions out of poverty. 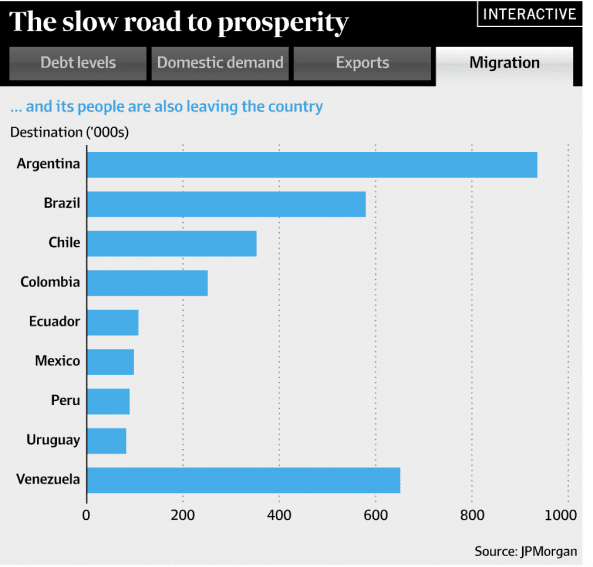 Booming commodity prices, driven by rapid urbanisation in China, helped fund his ambitious socio-economic agenda until a series of corruption scandals caught up with his government and ultimately spelt his own political demise.

The end of the commodities boom and an economic downturn, coupled with fading investor and public confidence in Lula’s successor, Dilma Rouseff, has since taken some of the shine off the advances made throughout the 2000s.

In football-mad Brazil, the national team’s 7-1 drubbing by Germany in the semi-final of the 2014 World Cup, which it hosted, provided a neat augury of the economic hardship to come. Federal Reserve tightening sparked a currency and credit crisis, output and employment shrunk, and Latin America’s most populous nation slid into its worst recession in modern times.

Worn down by the economic downturn and rolling political scandals, Brazilians last year swung their support behind Trumpian firebrand Jair Bolsonaro, a homophobic, climate change denier whose distrust of China is matched only by his appetite for opening up the Amazon jungle to mining, hydrocarbon extraction and logging.

Despite the campaigning rhetoric, however, most Brazil-watchers expect the country’s patchwork Congress, along with the market and political-savvy technocrats enlisted by the President-elect himself, to temper Bolsonaro’s most extreme instincts.

“I think Bolsonaro has been very long on rhetoric and short on policy proposal,” says Richard Lapper, consultant, associate fellow at the Royal Institute of International Affairs and former Latin America editor at The Financial Times. “A lot of the more radical promises made during the election campaign are probably not going to happen.

“There are quite a few potential conflicts within the administration between people who take a more ideological approach and those – especially the military guys – looking for stability,” he says.

“Over there we’ve got Brazil in the hands of a fascist – Bolsonaro is a Hitler of the modern era!” Maduro said during a state of the nation speech.

For all Maduro’s bravado, though, the late-Hugo Chávez’s “Bolivarian” socialist revolution, launched 20 years ago, has left Venezuela as close to a failed state as anywhere in the world at the moment.

With government printing presses rendering the local currency close to useless, inflation has skyrocketed to 1.5 million percent. Shortages of food and medicine are costing lives, and rampant crime and state violence have made Caracas one of the most dangerous cities on the planet. Aside from oil from an increasingly inefficient state energy group, Venezuela’s biggest export at the moment is people.

The country, among the world’s wealthiest in the 1950s, owes much of today’s horror to the ill-conceived premise that oil revenues, and borrowing against future flows, could finance a comprehensive series of social reforms and infrastructure projects aimed at addressing acute inequalities in income and opportunity – of the sort that bedevils many countries in the region.

When the oil price climbed to around $US140 a barrel in 2008, Hugo Chávez still had popular support, even as the private sector was squeezed or forced out of economic activity, and drought began to hammer agricultural production. The black stuff’s sharp decline to a low of around $US40 a barrel soon after was the beginning of the end of the socialist experiment.

The administration of Chávez’s successor has become increasingly authoritarian as the country has descended into chaos and bankruptcy, to the point now where Maduro’s legitimacy as head of state is contested by much of the world.

According to Lapper, Venezuela’s deep crisis could leave Evo Morales’ Bolivia as the last bastion of left-wing populism in South America, as the so-called “Pink Tide” of the early years of the 21st century ebbs away.

“With commodity prices high, Brazil, Chile, Argentina, Paraguay, Bolivia, Peru, Venezuela and Ecuador all turned to the left between 1998 and 2010,” he says.

“But since 2015, as economic times have become much harder, electorates have opted for more conservative politicians.”

China has been an important player in the region’s shifting fortunes, as has its diminishing dependence on the US for capital and leadership.

“The Chinese push into soya, iron ore, copper and energy has led to a big rise in trade ties,” says Lapper.

“China is now the largest trade partner for a number of countries in the region and a big source of investment, which means the region is no longer as dependent as it was on Washington and the international capital markets.”

At the same time, according to Marta Lagos, founding director of the Latinobarómetro polling and research group, South Americans are suffering another crisis of confidence in not only their respective governments but democracy as a political system.

This, she says, is due in large part to widespread corruption and the failure of governments to guarantee economic security.

“Corruption, the loss of faith in politics, and the sense that politicians can’t be trusted and aren’t delivering on their promises have ended up undermining faith in the whole democratic system,” she said.

In countries such as Chile, which have regularly fared better than most, people are more likely to list crime and personal safety as their main worry.

“Crime is one of the main concerns in countries with more economic growth,” she says.

And all these concerns have played straight into the hands of right-of-center parties and politicians.

But with commodity prices well off their highs, the new order will need to be more inventive about how to maintain economic stability while tackling poverty, crime and chronic inequality – not easy among growing geopolitical uncertainty, the slowdown in China, and a weaker economic outlook for much of the globe.

“The big question now is is how much ground right-wing populists such as Bolsonaro will win,” says Lapper.

“But the pink tide has definitely receded.”