What is happening to Chile’s economy ? 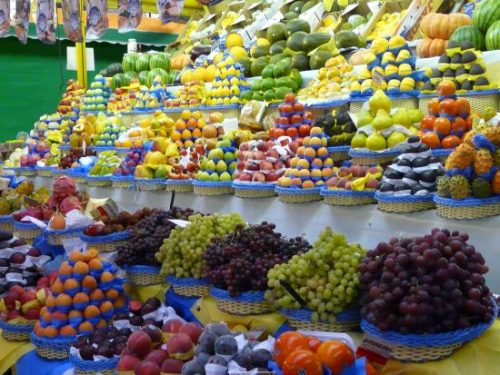 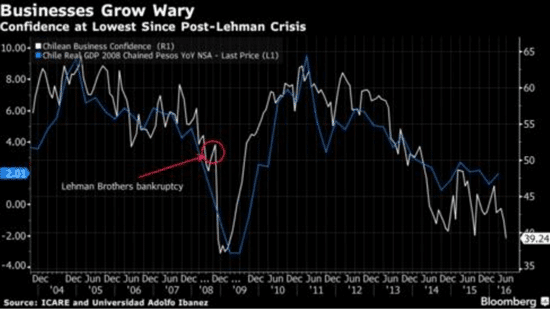 Chile’s business community can seem a hysterical bunch at times, seeing socialism round every corner and warning of economic Armageddon. Business confidence in the world’s largest copper producer is now lower than it was when Lehman Brothers Holding Inc. declared bankruptcy in September 2008 and plunged the global economy into its worst post-war crisis. Consumers think the prospects for the economy over the next year are the worst since at least 2002. Seem exaggerated? That’s because it is. Economists forecast the fastest growth in four years in 2017 and the government is the only net creditor in the Americas. In terms of economic stability, Chile is still a model. The business community has a scapegoat for three years of sluggish economic growth. It isn’t just the slump in the price of copper, Chile’s largest export, or the withdrawal of funds from emerging markets worldwide — it’s the administration of the President Michelle Bachelet. Tax increases, higher spending on health and education, environmental protection and plans to empower labor unions all add up to one thing — an attack on the neo-liberal pillars.

“The government’s reforms are putting private initiative into question, that’s why business perception keeps going down,” said Fernando Alvear, head of the Confederation of Production and Commerce. “The government is pushing for the wrong policies and we see no end to it.” 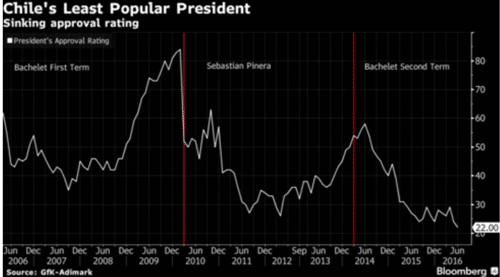 Yet, Bachelet is no red-menace. Chile still has the second-lowest tax burden in the 35-member OECD and the government maintains a tight rein on fiscal spending, ensuring the highest credit rating among the major economies of Latin America and the lowest yields on government debt. Business leaders may not be as divorced from reality as they seem though. Chile, South America’s wealthiest nation, has exhausted the easy productivity gains driving growth in poorer nations such as Peru and Colombia. At the same time, the nation’s natural resources are no longer so abundant. The seas are over-fished, copper grades in the mining industry are falling and the forestry and fruit industries have already used up the best land. The long-term outlook for the economy is deteriorating and Chile needs to “get out of its comfort zone,” said Jorge Selaive, the chief Chile economist at BBVA in Santiago. 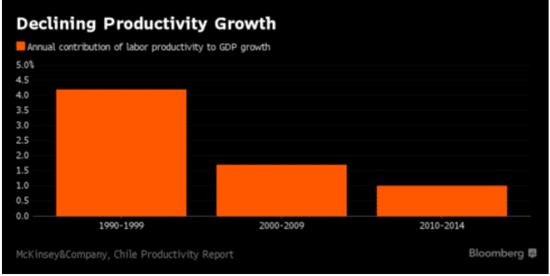 And that is why a week doesn’t go by without MIT-trained Finance Minister Rodrigo Valdes promoting the government’s productivity initiative, which has more than a hundred proposals stretching from putting more forms online to updating banking standards. It is also why the government raised spending on education by 10.2 percent above inflation last year and 7.5 percent this year. Chile seems designed by an economist for export-led growth: abundant natural resources in a country where no point is more than about 200 miles from the coast. Producers should speed up the shift toward more value-added products. Chile has declared 2016 as the year of productivity, saying it is an agenda that brings industry and government together. Now it needs business to get on and invest. “More working and less whinging” as Valdes said this week.

(The above article was written by Laura Millan Lombrana under the heading ‘Chile Businesses Think the Good Times Are Over. Why so Glum?’ and was published in Bloomberg.com on 20 July, 2016).