What happens to the Soya that South America exports ? 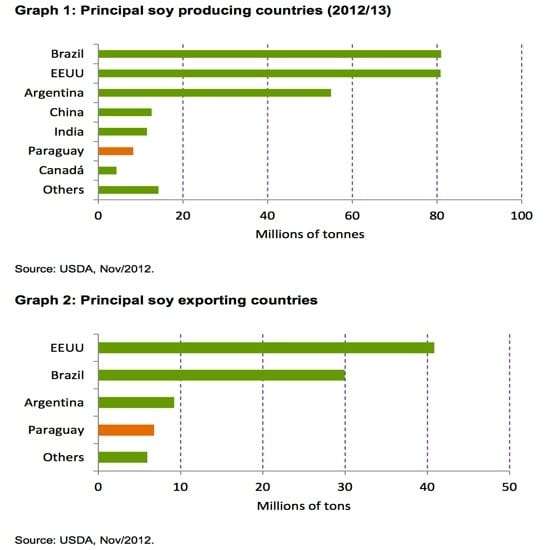 Soya is one of the most rapidly spreading crops in the world, particularly in South America export. The  demand continues to rise due to the increased consumption of meat and dairy products and the  biofuels boom. It is the crop that provides the largest amount of protein per hectare, and it is  used to make fodder for animals, prepared foods, vegetable oil, industrial inputs and recently,  biofuel. The principal producing countries are Brazil, the United States and Argentina . These countries lead in exports, and along with Paraguay supply 50 percent of world  demand (see Graph above). The biggest importer is China, followed by Mexico and Japan.

Nearly 85 percent of the world’s soya is processed to make paste (used in animal fodder) and oil  (mostly consumed as cooking oil, with some used in the production of industrial byproducts  such as soap and biodiesel). Soy imports sky-rocketed in Europe in the 1990s, due to ‘mad  cow’ disease (bovine spongiform encephalopathy), when soybeans began to be used instead of  animal bones in the production of fodder.  The trade agreements driven by the United States to
facilitate their access to the European market, such as the ‘European zero tariff agreement for  oil seeds’, have also contributed to the increase of European soya imports. The elimination of  import tariffs means that soya produced in South America is more competitive than that produced in Europe.

It costs about twice as much to produce oil from soybeans as it does from oil palm, so to be  competitive, processing companies must take advantage of important economies of scale. As a result, the soy industry is very capital-intensive, and those same companies (commodity traders  known as ABCD: ADM, Bunge, Cargill and Louis Dreyfus) control exports in the main producing countries.