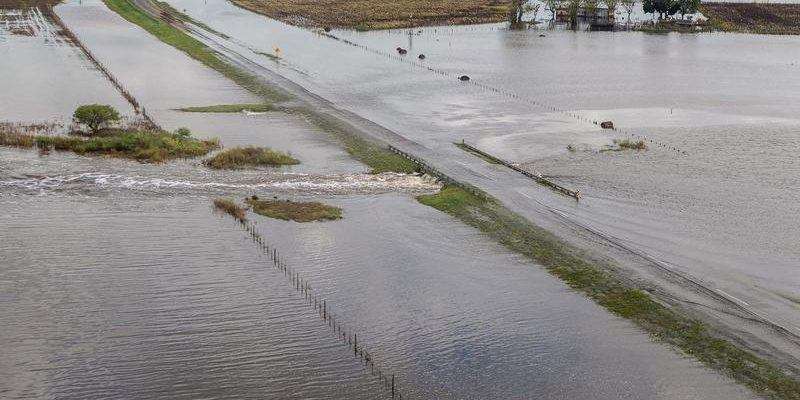 Gateway to South America on 09/12/2022 - 19:20 in All categories of countries are, Argentina Mendoza, Argentina-General, Argentine farms

Unlike many of the world’s main food basket regions where over-irrigation, climate change and groundwater pollution are the problem, Argentina has a different challenge. Since the seventies, the water table has been rising, according to a report by INTA ( Argentina’s Agriculture Department ) Marcos Juárez; The ascent in levels complicates the work in the fields and raises the costs of the local producers.

Examples of the rising water table level problem are in the south of Córdoba, areas bordering Santa Fe, San Luis, La Pampa and Buenos Aires Province, where the effects are significant. A survey of the depth by the Agrometeorological Station of the INTA Marcos Juárez from the decade of the 70s shows that the levels went from almost 11 meters to less than one meter at the present time.

The analysis of the historical series of precipitations (1948-2016) indicates an annual average of 890 millimetres, but there is great interannual variability with minimum values of 532 millimetres and a maximum of 1355 millimetres. The average of the period from 2012 is higher than the historical ones.

The report’s authors are Pablo Bollatti, Mercedes Bodrero and Fernando Escola, members of the Napas Marcos Juárez Group, made up of 18 organisations, such as agricultural and public service cooperatives, producers’ associations, municipalities, and INTA. It has more than 300 measuring points in eight locations in rural and urban areas.

When analyzing the variations of one year about the previous one, in the levels of the water table of the rains, different answers are recorded: between 1970 and 1986, the dynamics of the water table levels were less than that of the precipitations; Between 1987 and 2000 it became more sensitive to changes in rainfall and this has increased markedly until 2014.

Several causes affect the sensitivity of the water table, topography (the lands located in depressed areas receive more inputs of water by surface runoff although, to a lesser extent, subsurface and the water table also show more sensitivity); Occupation and water content of the soil (the presence of plants consuming water from the soil during most of the year generates space to store the rainfall that infiltrates) and depth of the water table.

Beyond the variations between years of more or less humid multi-annual cycles, the increase in the level of the long-term water table cannot be attributed to increases in precipitation, the report says.

At the beginning of the 1970s, the Marcos Juárez department occupied 20% of its area with annual crops and the rest with improved pastures (mainly perennials and, to a lesser extent, annual ones). Instead, annual crops currently predominate in about 90% of the productive area, mainly soybeans, maize and wheat.

This productive change (from mixed cattle to agriculture to agricultural predominance) in the last few decades has been associated with a reduction in the area of pastures and winter crops. In addition, direct sowing and associated technologies were incorporated: RR soybean, clean fallows (without weeds) of more than six months, and crops with shorter cycle genetics.

These technologies aimed to make more efficient use of water, trying to incorporate the soil and store most of the rainfall and minimizing non-productive losses to have sufficient reserves to be used by crops. A fraction of the water stored in the soil percolated to depth, feeding the water table constantly and variably.

Studies in recent years indicate the presence of the groundwater table at levels close to the surface (less than one meter) or even on the surface in many areas and times of the year; The water surplus generates crop problems (root anoxic, plant mortality, reduction of yield and surface area), to perform tasks (lack of soil, deterioration of roads), soil deterioration (erosion by runoff, outcropping of salts, deterioration of structure) and in civil works both rural and urban (deterioration of foundations of constructions and asphaltic folders of roads and streets).

The problem, according to the technicians, requires a collective approach to the organisation at the basin level, coordinated with hydraulic works and at the same time, an increase in water consumption.

The integral approach of systematisation and drainage of the basin allows the orderly evacuation of surface water surpluses. This reduces the permanent water logging, the deterioration of the soils, and the problems in the communication routes. But the analysis of the influence of the channels on the level of the surrounding water table shows that their effect is limited.

Changes in the percentages of crop participation in a basin translate into variations in the basin’s water balance and, consequently, in the level of the water table. The increase in the participation of winter grasses and perennial pastures leads to an increase in water consumption in the search for a balance with the rainfall contributions in the region.

Researchers insist that to obtain results, one must necessarily think of putting the proposals of the blue and green pillars into practice in an organised and coordinated way. “The problem does not affect us individually. Therefore, we must not think of isolated solutions but articulate and seek solutions collectively,” they indicate.

The solution will require more drainage systems and maybe a change in cropping options.

Note: This year, there has been no rain for the past six months in some of Argentina’s most productive regions. These areas are suffering the worst drought in decades.  It stands to reason that those without irrigation have serious problems.