Uruguay produce some of the world’s finest quality olive oil

Gateway to South America on 22/11/2013 - 15:34 in All categories of countries are, General of Uruguay, Uruguay Farms, Uruguay Farms 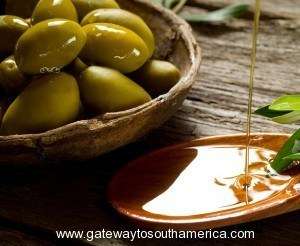 Uruguay became on the world’s top ten producers of olive oil last year and they are now preparing for another record harvest.

Being in the top 10 for quality will inevitably see 2014’s exports of the produce further increase.

It takes a few years for planted olive groves to reach maturity, Uruguay is now seeing it’s planted groves between 2002 to 2008 reach the stage in which they can be used towards the olive oil. Their Olive Producers Association (ASOLUR) has predicted that olive oil production in 2014 will show a 25% increase.

Based on current weather conditions, Daniel Davidovics, President of ASOLUR has predicted that 2014 will also see a production of 1,000,000 litres of extra virgin olive oil. Olive trees tend to bloom better in the drier conditions that were seen this spring thus resulting in high production volumes in the Autumn this coming year.

The Uruguay Olive Trail is a new up-and-coming tourism destination in the sierras which offer well-draining soils, rolling terrains and abundant sunshine. The south eastern coastal parts of Lavalleja, Maldonado and Rocha are where both the farms and processing facilities of the oil production are based.

Argentina and Uruguay are the only two Latin American and Southern Hemisphere members of the Madrid-based International Olive Council (IOC). The IOC has the highest standards for its member countries in the world and when Uruguay became the 8th member of the prestigious group its status as a premium olive-producing country became validated.