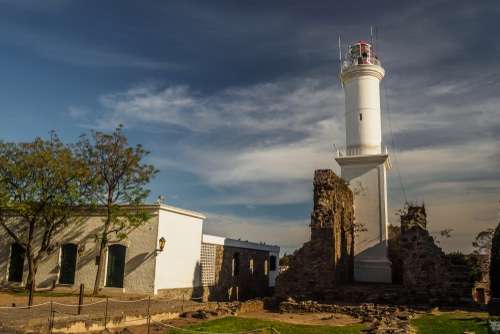 Colonia del Sacramento, the oldest settlement in the country.  The town was originally set up in 1680 as a strategic Portuguese posting, along the Rio de la Plata, to resist the Spanish Crown’s sovereignty of the southern cone.  However, after a hundred years of conflict and dispute, the Portuguese relinquished their control of the colony. Today, Colonia del Sacramento’s well-preserved colonial district blends its Iberian heritage with new architectural trends. The city still maintains winding cobble-stoned alleys lined by whitewashed Portuguese style housing, massive city gates, a working lighthouse and semi-restored convent ruins constructed in 1757.  The double-belfry stone Basilica of the Holy Sacrament, built by the Portuguese in the early 19th Century, proudly stands alongside several museum houses belonging to the colony’s First Viceroy and other important government and private citizens.#adp02

Colonia, as locals call it, started as a smuggling port, dodging taxes imposed on colonists, by the Spaniards. These days, Colonia is a major trade centre and tourist attraction along the Rio de la Plata ’s riverbanks, the wide river between Uruguay and Argentina.   This vibrant city’s historic quarter is dotted with colonial buildings, a truly fascinating place to discover on foot.  The copious shade of fragrant chinaberry trees extends towards the river’s edge providing the Barrio Historico with necessary coolness at the zenith of the summer season. In 1995, Colonia del Sacramento was declared a UNESCO World Heritage Site, an honour that locals are very proud of.

Across from densely populated Buenos Aires, Colonia is a springboard between Montevideo and the Uruguayan Riviera’s beaches. The city acts as a quaint and whimsical midway stop for motorists, ferry passengers and those arriving by private yacht in search of abundant restaurants, excellent museums and craft shops.

Adding bliss to perfection, Colonia del Sacramento also features numerous miles of prime coastline. During the summer, the city teems with Argentineans who journey the 30 miles by ferry to bask on Colonia’s pristine beaches.

Cobblestoned, as in historic times, Colonia’s winding lanes provide a challenging pedestrian experience.  The Portuguese Museum, the lighthouse and ruins of the Jesuit convent, provide strong evidence of the religious, military and cultural values of this mid 17th Century colonial outpost.

Only two hours from Montevideo to Colonia, on good roads; the historic district provides ample parking; walking endlessly is common in Colonia and stopping for lunch and ice cream in mid-afternoon is a must.

Colonia del Sacramento sports a smallish airport for private planes, but the best way to get here is by car or bus from Montevideo or via ferry from Buenos Aires.  There are four ferries daily in each direction; the speedy ferry takes only an hour; however, the slower, less expensive one, sails for two hours. Spending one day in Colonia del Sacramento is not enough; however, it’s long enough to whet a traveller’s appetite to return.