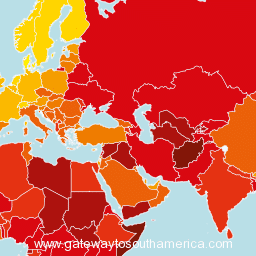 In its annual Corruption Perception Index (CPI) which is based on expert evaluation of public section corruption, the NGO ranked Uruguay 19th out of the 177 countries assessed, whilst Chile followed closely at 22nd.

“ URUGUAY and CHILE  score higher than other countries in the region. In general what we see is that countries that score well tend to have stronger and more independent institutions,” TI Regional Coordinator for the Americas Max Heywood told The Santiago Times. “For example, the judiciary, the legislative and the executive tend to be more independent. We also have more space for the media and civil society to act independently.”

“Looking at it from a global perspective, the scores of Chile and Uruguay are not necessarily as high as they could be, so sometimes it’s not helpful to simply make a regional comparison, but also to look at the situation of each country independently,” Heywood said adding that Chile should perhaps measure itself against OECD countries.

Denmark and New Zealand tied in first place compared to Finland and Denmark in 2012 whilst Afghanistan, North Korea and Somalia received the lowest scores, all with 8 points.

“The Corruption Perceptions Index 2013 demonstrates that all countries still face the threat of corruption at all levels of government, from the issuing of local permits to the enforcement of laws and regulations,” Huguette Labelle (Chair of TI) said in a press release.

“In general [Latin America] is below the world average on the Corruption Perception Index,” Heywood said. “We see links to in particular two of the big issues at the regional level — citizen security or the lack of citizen security, and the level of economic inequality. Both of these are linked to the high perceived levels of corruption.”