The Chaco region of Paraguay is becoming one of the most popular locations for investors looking to buy development properties, but you need to understand the soil.

Soils of the Chaco

“Soils are formed principally from fluvial deposits based on transported material from the rivers … In addition to the predominantly flat topography, the scarcity of rain results in an arid zone that experiences frequent dust storms and extremely high temperatures. The soil evolved over deep sedimentary deposits that are either neutral or slightly alkaline, with a high level of base saturation (90-100%).

There are marked differences between the soils of the eastern and western parts of the region: the eastern soils are predominantly clay with impeded drainage, frequently solodised with a shallow water table. The western soils are loamier, comprising sandy loams in the far western areas. They have relatively good drainage and vary from low acidic or neutral to slightly alkaline in the surface horizons. The water table is deep and may have high salinity. Because of the low rainfall, primary minerals and salts are abundant.

The soils are suitable for forestry and pastures and for cultivation in rotations, while perennial crops can be grown under irrigation. Fertility, in general, is reasonable, but the availability of water is a limiting factor, as is the resulting salinization from poorly managed irrigation. There are no major restrictions to the use of machinery necessary for all types of crop production.

As is usual in areas of warm climates with a long dry season, there is a strong flush of available nitrogen with the onset of the rains due to the mineralization of the soil organic matter.

The predominant vegetation of the Chaco is open dry woodland with cacti and bromeliads, stretching continuously over large areas, with a grass ground cover. Schinopsis sp. (Anacardiaceae) is the dominant tree. Other typical vegetation types are palm savannahs, savannah parkland, and low tree and shrub savannah, with halophytic shrubs on saline patches.
The Paraguayan Chaco has mesophytic vegetation in its eastern (oriental) part, where rainfall is higher, varying from 1 000 to 1 300 mm/yr, but changes to xerophytic in the extreme west, where rainfall falls to a maximum of 600 mm/yr. The intermediate central region is described as mesoxerophytic with annual rainfall between 600 and 1 000 mm.

Palm groves: these take their name from the caranday palm (Copernica alba), which grows in the lowlands, above the marshes, in broad strips. The understorey of the palm groves consists of grasses with weeds and some shrubs. Grazing animals eat the fruits and spread the seeds of the palm, which pass undigested into the faeces. The groves are on foot slopes between the higher ground and the swamps. Espartillo-type grassland occupies the higher areas. The main grasses are Sorghastrum agrostoides, Paspalum panciliatum and Paspalum plicatulum. Among the legumes are Desmanthus virgatus, Desmodium incanum, Galactea sp. and Phaseolus lathyroides, all of them well known forages that have been the basis for several commercially-grown forage cultivars in Australia. 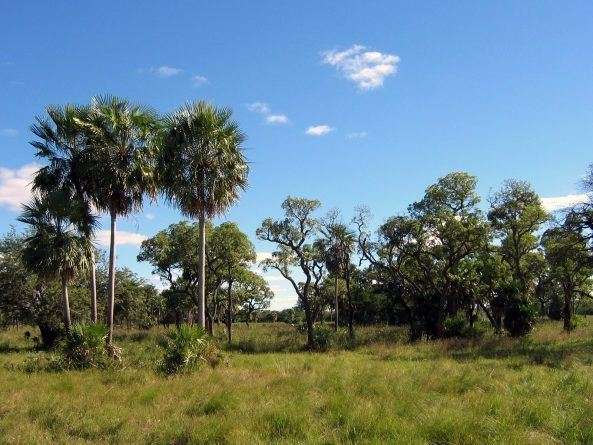 Espartillo grasslands: as noted above, these occupy the higher ground and are not flooded regularly. The soils are hydromorphic over clay subsoil, though the external drainage is good. The soils are well supplied with phosphorus, calcium and potassium. The following grasses are found: Elionorus latiflorus, Aristida circinalis, Tridens brasiliensis, Paspalum plicatulum, Spartina argentinensis, and Trichloris pluriflora. There are very few herbaceous legumes; Desmanthus virgatus is found occasionally. Trees include Prosopis campestris, P. nigra, P. algarrobilla and Copernica alba.

Thorn forest: this is found in the central and eastern plains, where trees and shrubs dominate over grasses. Soils are mainly alluvial, saline and alkaline saline. Drainage is fair and allows the growth of woody perennials such as quebracho colorado (Schinopsis lorentzii), quebracho blanco (Aspidosperma sp.) and palo santo (Bulnesia sarmiento). Also found are vinal (Prosopis ruscifolia) and algarrobilla (P. algarrobilla). Herbaceous forage legumes are rare, e.g. Desmanthus virgatus and P haseolus lathyroides. The grass cover is mainly comprised of Elyonurus latiflorus, Aristida adscensionis and Heteropogon contortus. Trichloris trinita is found in low-lying, more humid areas but does not contribute significantly as livestock feed. The high density of Prosopis makes it difficult for animals to enter the grazing areas. As Prosopis pods are eaten by livestock, undigested seeds are dispersed and add to the spread and invasiveness of the trees.

The Chaco has soils of very good potential; whilst it does have a climate with marked wet and dry seasons, its thermal growing season is long to continuous, and its soils are fertile and derived from deep alluviums. The Chaco compares favourably with other areas with similar climates.”