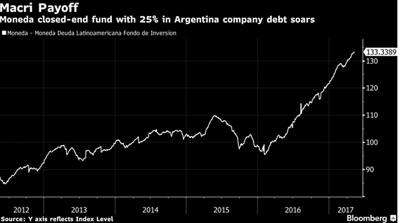 Latin America’s biggest investment fund focused exclusively on the region has a message. “If you are seeking returns, go LatAm,” Javier Montero (pictured below), a fund manager with Moneda Asset Management SA, said in an interview at the company’s headquarters in Santiago, Chile.

Moneda, with US$6.5 billion under management deployed in debt and equity from Mexico to Argentina, is bullish on the region over the next three years. The reason is a general political shift to a “more market-friendly approach” seen in Argentina, Peru, Brazil and Uruguay, and soon to happen in Chile, according to Montero.

That leaves Ecuador and Venezuela as Latin America’s final major economies still governed by leftist parties that shun world markets. After three years with “pretty ugly” results in growth, fiscal deficits and currency depreciation, the 42-year-old Argentine said, “we are now seeing that inflation and fiscal deficits are falling, at a time that genuine growth is returning.” Most important, according to the portfolio manager overseeing $2.5 billion of Moneda’s assets under management, is that Latin America is a zone of relative stability, not facing the threats of war or immigration issues roiling other emerging markets.

“Out of the three emerging-market zones, LatAm has beat and will continue beating Asia and EMEA because of this,” Montero said, using the acronym for Europe, the Middle East and Africa. Local Markets Montero sees an opportunity in the historic levels of depreciation Latin American currencies suffered since May 2013, with the tender of Chile, Brazil, Mexico, Colombia and Venezuela dropping between 26 percent and 38 percent, while Argentina’s peso tumbled 66 percent. “In the last three years, investing in local markets didn’t work because the currencies depreciated, eroding the profits in dollar terms, but now, without depreciation, you get the whole yield,” he said.

The fund already had a position before Mauricio Macri became president in December 2015, Montero said, and it keeps increasing it on bets the center-right alliance will trigger a new yield compression for bonds and a jump in stocks. Argentina’s midterm election in October, in which Macri will seek a mandate for his pro-business policies, is scaring off some investors. Argentina pays a yield premium to Brazil of around 150 to 200 basis points because of concerns Macri’s slate will be defeated. “Many investors believe the midterm election may bring a return to the Kirchner policies that governed 12 years,” he says. “There’s no return to the leftist Kirchner policies.”

The election should trigger a wave of infrastructure financing, Montero said, especially if the government fulfils its promise to avoid double taxation for closed-end funds. When Chile passed a similar law four years ago, closed-end funds went from $13 billion to $20 billion, he said. “It’s a lesson to be learned,” Montero said. Given the amount of debt Moneda buys in Latin American high-yield companies, and its ability to hold as much as 15 percent of its total assets invested in distressed or defaulted bonds, the fund has become an expert in restructurings.

‘Recovery Value’ “High-yield companies can eventually default,” he said. “We can keep buying bonds and later sit in a friendly way to save the company, defending our clients’ money. We are not afraid of keeping bonds in distress or even buying defaulted bonds when our analysts see recovery value.” So far, the Chilean fund, which also has offices in New York, has led 30 restructurings in the region, from Argentine dairy company Mastellone Hermanos SA in 2009 to the ongoing restructuring of the wind-turbine-maker Industrias Metalurgicas Pescarmona SA, in which creditors are gaining control after a debt-for-equity swap. Moneda’s next target will be Venezuela, Montero says.

Moneda had owned a significant debt position in Venezuela’s oil giant Petroleos de Venezuela SA, which it unloaded when President Hugo Chavez died in March 2013. For the past four years, the firm has been getting ready for the opportunity to return, Montero said. “Some kind of restructuring will happen soon,” he said. “How are they going to do it, and which recovery value will they offer? That’s unclear. Today we have a very small position, but indeed there will be an opportunity there.” Puerto Rico’s defaulted bonds are in Moneda’s radar, but the fund hasn’t yet assessed the recovery value in the situation and hasn’t become involved, Montero said. In Brazil, Moneda is still waiting for an overhaul of the pension system — which is facing public opposition — and for the outcome of next year’s presidential election. “Brazil still needs to say how it will cut its fiscal deficit,” Montero said.

(The above article was written by Pablo Rosendo Gonzalez and was published in Bloomberg on 11th May, 2017)