Trevelin in Patagonia: the village that comes alive with the flowers of spring 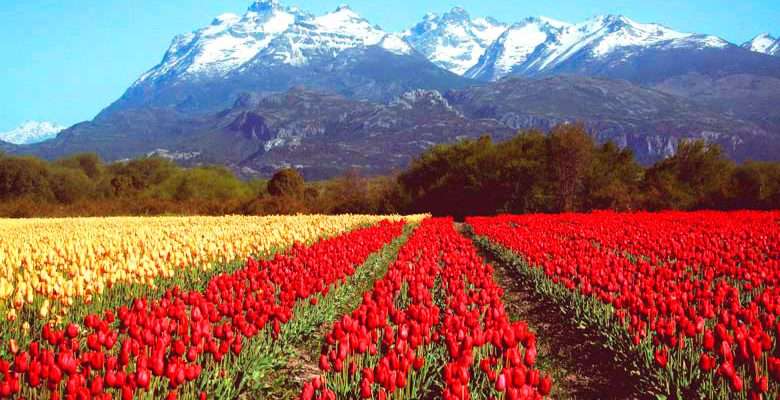 Gateway to South America on 03/11/2019 - 02:36 in All categories of countries are, Argentina Lifestyle, Argentina-General, Argentine farms

Two thousand kilometres from Buenos Aires, a field of tulips nestled between snowy mountains and crystal clear mountain stream waters draws a rainbow of 27 colours that are impossible to forget.

The fields of tulips attract visitors from Tierra del Fuego to Chaco, from Holland to the United Kingdom, lovers of flowers here find a unique charm since the plants are surrounded by a cordon of the Andes mountain range, known as the Trono de Nubes (Throne of Clouds)

A descendant of Welsh immigrants – Juan Carlos Ledesma – started the venture twenty-four years ago, on lands he inherited from his great-grandparents.

Tulips were a big bet on land that until then had only grown wheat. But Juan Carlos and his wife, Silvia, were attracted to the adventure. “It was difficult, and that attracted us more,” says the red-headed, stubborn man, a Welsh descendant, who leads the family business. Since then a bulb now beats in his heart. Tulips are his life. He takes care of them night and day, without rest.

The first bulbs came from Holland. It didn’t work out well. It took three and even four years to see the first flowers. “Each seed box was an investment that deprived us of having other amenities in the house,” recalls Juan Carlos.

In the flower fields their children, Matthias and Mary, learned to walk. The two grew up on the plantation until they went to study far from home, to Cordoba. But they always come back to help in the harvest, which is done in January and that is still done manually.

The bulbs are planted in May and the flowers are cut in the first week of November, with great care to separate only the cup. The stem is necessary for the bulb to continue to grow, which two months later is harvested and cleaned manually.

The little ones are kept cold to be replanted in May. The biggest ones are sold, all over the country. “My thing is to grow the bulb, which is a reserve organ,” Juan Carlos tells tourists who come to visit its fields.

Tourism has come in the last four years attracted by the multiple colors of these rainbows of flowers on the ground.

There are colours that are more difficult than others to produce. Black, for example. Ledesma bought forty boxes of bulbs in Holland and only managed to see one grow. The others got spoiled along the way.

In the fields, there are also reds, yellows, whites, fuchsias, violets, roses among twenty other colours of the plantation calledTulipanes Patagonia.

There are more than two million seeds planted on three hectares where the cold is the constant of all winter and spring is barely warmer.

Juan Carlos doesn’t sell the flowers. He sells the bulbs to grocers, florists or flower growers. For this business, it is necessary to “turn the head and think first of the bulb rather than of the flower”.

But the blossoming fields attract tourists, who tour the place like capers with photographic machines. “It’s worth coming here to see them,” says Sara Satre, who arrived with her husband from Rio Gallegos.

The flower fields gave a strong impetus to these people of descendants of Welsh .

“Thanks to the tulips, October and November we work as in high season”, argues Luis Breda, of the Casa de Piedra Inn. “Before, visitors only arrived in January and February,” he says.

“It was a boom for Trevelin, who managed to add another high season month,” says Victor Yañez, local tourism secretary of the place, which in Welsh means Pueblo del Molino. “And there are ventures of other flowers,” she says.

The road to Trevelin from Esquel is easy: just 23 kilometres down Route 259. To go to the fields of Tulipanes Patagonia you have to cross the Corinthian River and the Miguens stream, in the direction of the passage with Chile Futaleufú. A valley where goats are shepherded and alfalfa is sown, watered by clean waters of mountains fed by the waterfall of Nant and Fall.

“You don’t see this in Holland. Here we have the snowy mountains next to the tulips. A unique postcard,” says Matías Ledesma. “Seeing the sunrise in these plantations is an experience that really has a lot of magic,” he says.

The village not only lives off the tulips: very close is the Los Alerces National Park, with its ancient alerzal that is a World Heritage Site. In the evening, after touring clear and transparent lakes, you can taste in the village a fabulous Welsh tea.

In Naim Maggie tea was served as did the first settlers who arrived from 1891 to Chubut. 40% of the population of 11,000, carries Walsh in their blood. Including Javier de la Fuente, great-grandson of Magui Fridman Jones, who brought the recipes from that principality.

“In Wales we have rivers, lakes and mountains, but everything is smaller than here,” says Claire Vaughan, who teaches the language to local school teachers.

“It’s interesting to visit Trevelin,” richard and Felicity Jones, who came to this town in the south of the country in search of the trails of their family, who crossed the ocean more than a century ago.

The village doesn’t just offer tulip fields. It is, as stated, the entrance of a national park that is a World Heritage Site. And it is attached to the Nan and Fall provincial parks ,which offers a 64-metre-high waterfall and views of “the charming valley,” the Joneses said.

Visitors who arrive here do not have to wait until next October to see the flower fields. The first week of December the Peonies bloom: there are eight varieties, many of them export.

Then the village gathers at the peonies festival produced by Martín Sasaki – with his family, in the Patagonia Flower Grup entrepreneurship. The entire village assembles sculptures and street ornaments with the petálos of some of the 600 thousand flower rods that dress Trevelin in color in December.