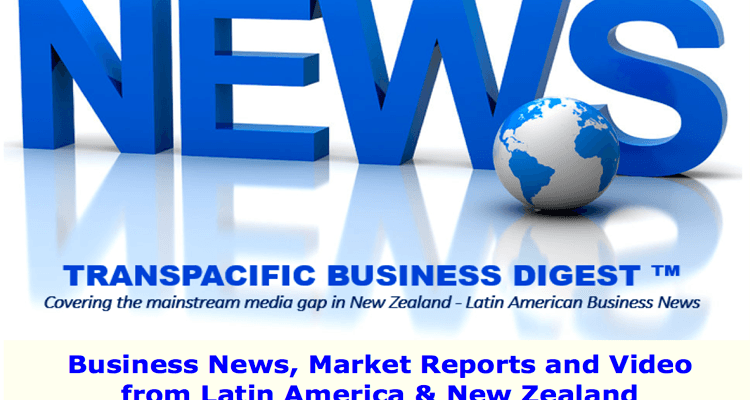 The Manning Group kindly forwarded me their Special Inaugural Edition of the new newsletter they are publishing which will be of interest to importers and exporters from and to Latin America.

There is a significant gap in Latin American media reporting about New Zealand and its business news and vice versa and with the advent of TPP, the NZ Government’s Trade Policy pivot toward Latin America and the new Air New Zealand service to Buenos Aires which has raised profile and the demand for Latin American/NZ business news has grown strongly in both regions and it is in response to its clients’ needs and strong market demand that Manning Group is publishing Transpacific Business Digest.

Manning Group principal and Digest editor Thomas Manning has written regularly for fifteen years on NZ/Latin American trade and aviation in the Buenos Aires Herald and the EMA BusinessPlus & Export Link magazines and he founded and then edited the Latin America New Zealand Business Council Newsletter for four years while serving as Vice President of the Council. To view some of Thomas’ published work Click Here.

To see a copy of the Inaugural Edition of the Transpacific Business Digest please Click Here.

Transpacific Business Digest will be distributed free of charge thanks to sponsorship from prominent New Zealand and Latin American companies.

Transpacific Business Digest is connecting diverse business and official establishments in both New Zealand and Latin America with a view to promoting trade and investment between the regions.

Transpacific Business Digest aims to serve the growing interest in Latin American about New Zealand as recently highlighted by the Buenos Aires Herald which observed that the recent increase of air services between New Zealand and Latin America with the new Air New Zealand connection (three flights a week) and LATAM Airlines long-standing daily services are providing the quickest gateway to Asia compared to all other routes and this increased frequency is resultantly fostering a growing interest in collaboration between the two regions in terms of servicing third-party markets in Asia.

Although New Zealand is as a major food producer in the dairy industry and other areas, it cannot meet the scale of the gigantic Asian market now and far less in the future (with world food demand set to quadruple by 2050 and much of the increase in China, India, etc.).

Previously the fact that major agricultural exporters Argentina and New Zealand are not complementary economies was seen as a drawback — now it becomes an asset because Latin America features as a potential partner to achieve the critical mass needed to meet Asian demand.

New Zealanders are ready to invest in Latin America if assured legal security and conversely New Zealand is a safe and solid investment for Latin American capital (including the vast sums already abroad).

New Zealand Prime Minister John Key is to attend the Asia-Pacific Economic Cooperation (APEC) summit in Lima, Peru in November 2016 and he is expected to make state visits to a number of Latin American nations around that trip to build on the contacts and trade agreements made during his Latin American tour in 2013.

New Zealand is also ideally placed to serve as an arbitration and regulatory centre for Latin America with its long-established reputation for legal security (with its roots in British justice).

We welcome subscriptions and if you would like to receive free up-to-date Latin American and New Zealand market reports, videos and business news please Click Here.