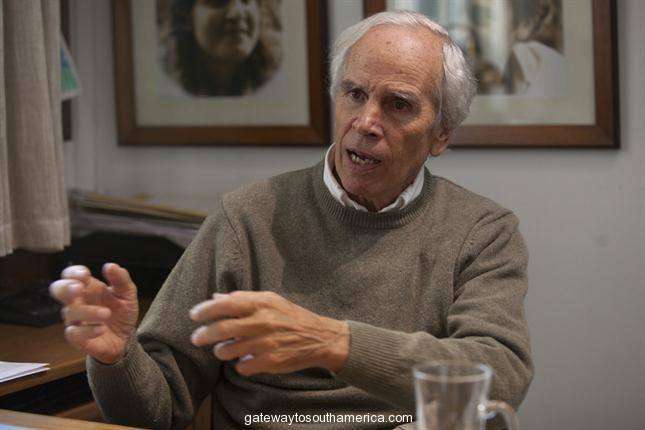 The foundation created by the late creator of U.S. clothing brands Esprit and The North Face turned over 407,000 hectares (1 million acres) of forest, mountain, lakes and glaciers in Patagonia to the government of Chile on Friday, the Tompkins Conservation Foundationsaid.

The gift makes final a plan that began with Douglas Tompkins, a U.S. businessman turned conservationist who purchased the land piecemeal from ranchers and others over several years. It was the largest ever private donation of conservation land to the public, the foundation said.

Chilean forest service CONAF will manage the two newly created national parks, known as Pumalin and Patagonia, as well as related tourist infrastructure, including lodges, cabins and campsites, through a concession system.

In 1992, the foundation created by Douglas Tompkins began acquiring large tracts of temperate rainforest with the goal of their permanent conservation, in what is now Pumalín Douglas Tompkins National Park. This new national park protects 25% of Chile’s endangered alerce forest, a protected species with individuals over 3000 years old, in addition to lakes, waterfalls and volcanoes. Fauna includes pudu (a miniature deer), puma, Commerson’s dolphin, Darwin’s frog and Chile’s only marsupial, the rare monito del monte. Park infrastructure includes a cafe, cabins, campgrounds, an information centre and 11 trails. It’s located 114 miles south of the regional capital of Puerto Montt, accessible by road and ferry, on the Carretera Austral. www.parquepumalin.cl

Patagonia National Park features the greatest terrestrial biodiversity in the region, with habitats ranging from Patagonian steppe to lenga forest and wetlands. It’s home to numerous endangered and threatened species, including ten percent of the global population of huemul, the south Andean deer. A former estancia, its central area was historically overgrazed and poorly managed as a product of intensive ranching. Through a long process of restoration and rewilding, the native grasslands have recovered and wildlife has returned in numbers, including herds of guanaco, a South American camelid, flamenco, puma and a population Darwin’s rhea under restoration. Top notch infrastructure includes a lodge, restaurant, visitor centre and museums, as well as campgrounds and trails. Patagonia National Park consists of the Tompkins Conservation donation in addition to the former national reserves of Jeinimeni and Tamango, plus fiscal land. It’s located 180 miles south of Coyhaique, the regional capital of Aysen. www.parquepatagonia.org

Both parks are in a remote region of southern Chile known for its grandiose mountain scenery, untracked Andean peaks and rare species of wildlife, including mountain lions and Andean condors.

Chile has committed to investing US$350 million to the establishment of staffing and maintenance for the newly public land, including hiring 25 park guards, the foundation said in a statement.

“After years of working together with Doug, our dream that Pumalin and Patagonia Parks become national parks … has come true,” Kristine Tompkins, president of the foundation and widow of the late Douglas Tompkins, said in a statement.

Douglas Tompkins, who gave up a business career to focus on philanthropy and conservation, died of hypothermia in 2015 after his kayak flipped over in the ice cold waters of the General Carrera lake in southern Chile.