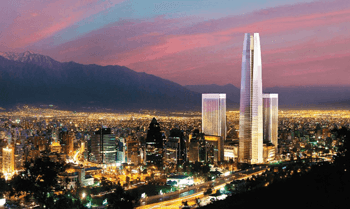 Entrepreneurs take note! You want to take a look south of the Rio Grande for your next venture. Strong start-up culture is no longer limited to places like Silicon Valley, New York City and Austin, Texas. South American cities are gaining international attention for their robust start-up communities, low cost of doing business and impressive pool of tech talent. Not to mention, a number of South American governments are taking action to make sure that their cities play a role in the next wave of innovation by providing subsidies and other incentives. Here are three that stand out.

Santiago, Chile Santiago has been dubbed as the “Chilecon Valley” of Latin America and for good reason, too. Chilean government, universities, private corporations and investment funds made a concentrated effort to transform Chile into a entrepreneur hub. The state-backed accelerator Start-Up Chile is a six-month program that offers graduates about $35,000 in equity-free financing and a one-year visa. Since its launch, Start-Up Chile has graduated more than 1,100 start-ups. And earlier this year the organization launched a follow-fund called Start-Up Chile SCALE to give certain graduates even more support.

Of each graduating class, which usually comes to about 100 companies, about 10 start-ups are selected to receive an additional $100,000 in equity-free financing as long as they meet certain requirements and agree to keep their business in Chile for at least a year. One key thing Chile did to help attract international attention as a start-up hub was open its doors to foreign entrepreneurs as other countries were shutting theirs, said Sebastian Vidal, executive director of Start-Up Chile.

“We tried to concentrate all of our efforts on a really clear value proposition. The two main benefits were 40K equity and the second was a one-year working visa,” Vidal said. “We realized we had something in our hands that no one was doing before, which was a start-up visa and this value will open a lot of doors for us.”

Medellin, in Colombia is tucked in the Aburra Valley of the Andes Mountains of Colombia, Medellin is becoming one of South America’s hottest new places for start-ups.

At the centre of the growth is the government-sponsored organization Ruta N, which is an innovation and business centre for new companies. Among other things, the corporation offers young companies support in key areas of business including finance, recruitment and public relations. Another reason entrepreneurs may want to take a strong look at Colombia is because it’s coming online quickly. The Colombia government is working to bring 63 percent of its population online by 2018, according to a report by Colombia Reports. It also boasts 69 percent smartphone adoption, according to the GSMA “Mobile Economy” report for Latin America.

But besides its strong public sector involvement, Medellin also has a lot to offer new businesses because of its location, said Erik Stettler, director of Socialatom Ventures, a venture capital and private equity firm that has invested in 35 start-ups across Latin America and has very strong operations in Medellin. Much like San Francisco, Medellin boasts a mild climate and is relatively small in size, Stettler said. “It’s a great physical place to live, there’s a great quality of life, a low cost of living and great sense of inclusion,” Stettler said. “It is a smaller city than a lot of other start-up hubs in the rest of the world, but like the Bay Area, size isn’t the only thing that matters.

What matters is the concentration of talent and the dynamic of how different parts interact with each other. It’s about how friendly is the environment in terms of how coherent are the developer groups, the public sector and the universities, and how comfortable it is in terms of the political climate.” Medellin has helped young companies like Viajala take off. The travel search start-up recently raised $500,000 in seed funding led by the VC firm Altabix. Viajala, which has less than 10 employees, has grown 30 percent every month for the last year in terms of revenue and is on trajectory for continued growth, said Stettler, whose firm is invested in Viajala.

“They are well on their way to becoming a huge company,” he said. “We will have some more pretty dramatic cases coming out of Medellin very soon.”

There are a lot of reasons an entrepreneur might like Buenos Aires: A low cost of living, a high quality of life, accessible transportation and a relatively low cost of doing business. But the real reason for start-ups to come to the city is because of the people, said Lisa Besserman, founder of Start-Up Buenos Aires.

“There’s this incredible entrepreneurial spirit that I have never seen anywhere else in the world. Because of or in spite of the economic instability or the political turmoil this country has faced, it’s created this breed of entrepreneurs that work really hard to create their own visions,” Besserman said. And if you are looking for tech talent, look no further. Buenos Aires has a strong pool of tech workers that is gaining the attention of major companies around the world, Besserman said. “A lot of start-ups are either coming here to start subsidiaries and open up operations or outsourcing their tech teams to Argentina.

There’s a high quality of tech talent here at a very low cost. I’d say between 25 to 35 percent of the cost in the U.S.,” she said. “We have actually seen companies outsource tech talent to Argentina or try to recruit talent from Argentina to bring back to their home country.” Besserman launched Start-Up Buenos Aires, an organization working to strengthen the start-up community, about two years ago. SUBA provides resources and hosts classes and workshops for entrepreneurs on things like how to pitch investors to how to run a crowdfunding campaign. It also helps give start-ups some international exposure.

“We partner with international organizations on global initiatives. We bring activities that are happening around the world to Buenos Aires. For example, pitch competitions, hackathons, start-up week, anything that is happening around the world, we work as an organization to bring it here,” she said. The city is also home to Mercadolibre, one of South America’s most successful tech companies. The e-commerce outfit is now traded on the Nasdaq, and its founder Hernan Kazah launched Kaszek Ventures, which is one of the biggest funds in South America.

(This article was written by Cadie Thompson and was published by CNBC on May 8, 2015)