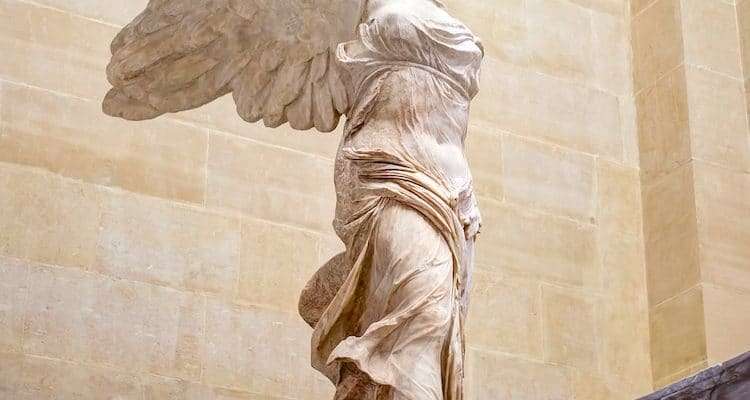 It’s no secret that the Louvre has one of the world’s most stunning art collections. In addition to the Mona Lisa and an entire Michelangelo Gallery, the major museum also excels in antiquities, with gems that include the Great Sphinx, the Venus de Milo, and the Winged Victory of Samothrace.

Buenos Aires has a perfect replica for all to see

One of the most iconic buildings in Buenos Aires is the Estrugamou Palace Apartments.

Within its, internal courtyard is this replica of the Winged Victory of Samothrace or in Spanish called “La Victoria Alada de Samotracia”. It can be seen from the street.

Though the original marble masterpiece remains one of history’s most famous sculptures, many people may not be aware of its history—including its ancient roots, 19th-century discovery, and soaring influence on modern and contemporary art.

The exact origins of the Winged Victory of Samothrace are not known. However, archaeologists and art historians have extensively studied the sculpture to estimate its age, intention, and subject matter.

According to the Louvre, the piece was likely crafted by the people of Rhodes, a Greek island, in the early second century BCE. This places its creation at the heart of the Hellenistic period (323 BCE-31 CE). This ancient art movement is particularly renowned for its expressive sculptures of mythological subjects in motion—an approach embodied by the Winged Victory.

The 18-foot sculpture depicts Nike, the Greek goddess of victory. As wet and wind-blown drapery clings to her body, the winged figure triumphantly steps toward the front of a ship, leading historians to conclude that it was created to commemorate a successful sea battle.

The statue was one of many marble pieces that adorned the Sanctuary of the Great Gods, an ancient temple complex on the island of Samothrace. This seaside shrine was dedicated to the Mystery religion, or secret cult, of the Great Mother.

Given the prevalence of naval battles during this time and its proximity to the Aegean’s widely-used maritime routes, the shrine featured several sea-inspired monuments. These included dedicated columns, important ships, and the Winged Victory, which was placed in a rock niche (possibly a grotto) that overlooked the shrine’s theatre.

French diplomat and amateur archaeologist Charles Champoiseau unearthed the Winged Victory in April of 1863. While he reassembled 23 blocks that compose the ship, he sent the figure back to Paris just as he found it: in three pieces.

The base, torso, legs, and left-wing eventually reached the Louvre, where they were reassembled in the Carytid Room of classical antiquities. The museum also added a plaster wing to the sculpture—an addition that remains today—but did not opt to recreate the head or arms.

However, nearly 90 years after Champoiseau discovered the fragmented figure, archaeologists from Austria uncovered missing pieces, including Nike’s right hand. Unfortunately, the hand had no way of being reattached to the sculpture, as the figure remained armless. Still, its unearthing was extremely important, as the unclasped hand disproved an early theory that the figure had been initially grasping an object.

“It has been suggested that the Victory held a trumpet, a wreath, or a fillet in her right hand,” The Louvre explains. “However, the hand found in Samothrace in 1950 had an open palm and two outstretched fingers, suggesting that she was not holding anything and was simply holding her hand up in a gesture of greeting.”

Today, the fragmented hand can be viewed at the top of the Louvre’s Daru Staircase, where the Winged Victory has been displayed since 1883.

Like other Hellenistic sculptures, the Winged Victory is admired for its naturalistic anatomy and, consequently, its realistic depiction of movement.

The artist positioned Nike in an asymmetrical stance to suggest a body in motion. Known as contrapposto (“counterpose”), this pose implies movement through realistic weight distribution and an S-shaped body. Other famous sculptures demonstrating this classical approach to conveying the human body are The Walking Man by Rodin and Michelangelo’s David.

Another element that helps suggest movement is the billowing fabric draped across the figure’s body. As Nike dramatically steps forward, the seemingly translucent garment twists around her waist and wraps around her legs. According to the Louvre, this “highly theatrical presentation—combined with the goddess’s monumentality, wide wingspan, and the vigour of her forward-thrusting body—reinforces the scene’s reality.”

Today, the Winged Victory of Samothrace remains one of the most celebrated sculptures on earth. Since making its debut at the Louvre in the 19th century, it has inspired countless artists. Surrealist Salvador Dalí directly appropriated this sculpture for his Double Nike de Samothrace (1973), and Futurist Umberto Boccioni employed the figure’s iconic stance for his Unique Forms of Continuity in Space (1913).

While these modern interpretations undoubtedly capture the piece’s spirit, no other Winged Victory can captivate audiences as triumphantly as the original treasure.