The Trees of Buenos Aires City 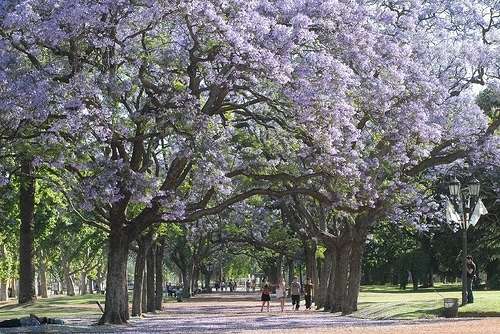 Gateway to South America on 29/08/2019 - 12:16 in All categories of countries are, Argentina Lifestyle, Argentina-General, Buenos Aires Residential

The vast majority of the trees are on the streets are on the public roads (85%), and the rest are distributed between parks, squares and gardens (15%). There is a huge variety of species: there are 423 among them shrubs, conifers, palm trees and other botanical varieties.

Comparison with the previous census

In the seven years between the two censuses, 6,887 new specimens have been planted and another 27,137 were replaced that were at risk of falling or were dead. At the end of 2018, 7,083 new trees were planted and not included in is last survey.

The , the trees and their shading

Although Commune 12 has the most specimens, as shown in the graphic above, if we measure the shade generated by the trees, we find that the neighbours of Núñez, Belgrano and Colegial are the areas that have most benefited. However, if we take into account the number of inhabitants of each commune, it is the neighbours of Recoleta who are in first place.

Most trees are young

The city has more than 50% of its young trees distributed across its communes. The age of the trees is measured in DAP, which is the unit of measurement with which the diameter of the trunk is measured at a standard height of 1.3 meters from the ground.

Comparison with other cities around the world

The city of Buenos Aires has 30.85% tree cover, a number not at all negligible when you consider other cities raised in Treepedia, a site that measures the treetops through Google Street View and thus elaborates a “green view” index*. The top of the 27 cities assessed so far is the US city of Tampa with 36.1%.

For filling the city with colours in spring, identifying and removing allergic trees or generating admiration from the neighbours, there are four species that do not necessarily stand out in the census but are important for the porteños.

In its 203 km2 surface, the city of Buenos Aires has 431,326 trees. The vast majority are on the streets (85%), and the rest is distributed among parks, squares and gardens. The last census that assessed them – published last March – revealed that there is a huge variety of trees in the city: there are 423 species, ranging from large leaf specimens, conifers, shrubs and other types. Within them, the three most common on the streets are the American Red Ash, Banana and Ficus Benjamina. In parks and squares, the broads, the famous are Jacaranda and Poplars.

Most of the porteños trees are young if you measure the diameter of the trunk, but more than 90% are vital. If the ding is measured, the neighbours of Nunez, Belgrano and schoolchildren are the ones most benefited in the high city’s green ranking: in 13% treetops cover more than 50% of the surface. The less advantaged are those who live and circulate through Balvanera and San Cristobal, where the figure drops to 11.16%.