The Trans-Pacific Partnership passed affecting 40% of the worlds economy 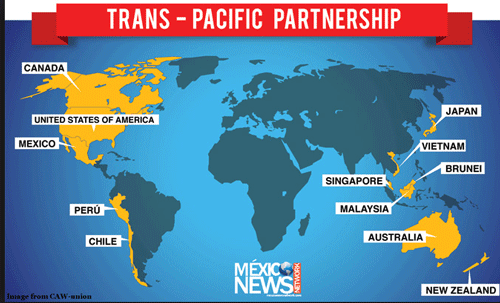 It is the world’s largest and most important Trade Agreement ever negotiated has connected all the major Pacific Nations.

However for years we have been told that Trans-Pacific Partnership  was a global conspiracy by big tobacco and big Pharma etc to undermine sovereignty and deliver only negative outcomes for the TPP participants.

Yet the outcome was completely different.

TPP counties do not  have to make any changes to its rules around data protection for “biologics” and tobacco can be exempted from Investor State Dispute Settlement.

Yes, TPP could have been better, full free trade in dairy would have been great for countries like Chile and New Zealand but sometimes you have to wait for justice to take place.

Unfortunately, that quest will keep trade negotiators busy for many years to come. But as TPP’s membership expands and as the farming model changes in some jurisdictions (inevitable) there will be plenty of opportunities for this agreement to be passed.

After years of talks, the controversial and secretive Trans Pacific Partnership trade deal has been finalised.

The 12 countries negotiating the Trans Pacific Partnership have struck a deal after five years of intense negotiation.

One surprising element that should please critics is that tobacco companies will be specifically banned from taking cases under the Investor State Disputes Procedures. Uruguay who is currently being sued for breaching GATT over tobacco advertising would have benefited from this had it been a member.

There would be no change on the current patents for biologic medicines, although an extension on copyright by 20 years will be phased in.

“This agreement will give member exporters much better access to a market of more than 800 million customers in 12 countries across Asia and the Pacific to the America’s, and help local firms in member countries do business overseas,”

This trade agreement has  been a work in progress for the past 25 years.  TPP would eliminate tariffs on 93 per cent of member countries exports from United States, Japan, Canada, Mexico, and Peru

The “TPP bus” will be carrying on and picking up more countries, with South Korea already in line to join the others and it is likely Paraguay might join as well due to its frustration with the Mercosur..

“Outside dairy, there is only one exception and only for one market and one tariff line where we cannot say that in the long run, no matter how long it takes, we will then have complete free trade for all exports, which is quite a big statement to be able to make.”

What does the TPP deal include?

Drugs
There will be no change to the standard 20-year patent period for pharmaceuticals in New Zealand but other countries will be required to extend the period on specific drugs if the approval processes are too long. On the issue of biologics, the present five-year period of data exclusivity will remain.

INTELLECTUAL PROPERTY
Existing copyright is 50 years but under the deal it will have to be extended gradually to 70 years, bringing it into line with most OECD countries and half of TPP countries.

INVESTMENT
The threshold above which an investor must get approval from the Overseas Investment Office will increase from $100 million for all countries except Australia, to $200 million for TPP countries. Australia gets more favourable treatment due to the fact it is under pressure from Chinese Sovereign Funds.

What does this mean for the other Latin America Countries that stayed out of this agreement but instead rely on the dysfunctional Mercosur agreement? Only time will tell but it certainly will put them at a trade disadvantage going forward in the short term.