The Peru-China relationship goes from strength to strength 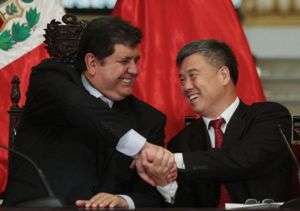 China and Peru have had a long relationship, dating back to the 19th century when many Chinese immigrants ended up in Peru. Currently in Peru, 5% of the population are estimated to be Asian Peruvians however one source states that 5 million citizens have some Chinese ancestry, making that 20% of the country’s population.

Minhui Huang, Limas Chinese Ambassador, has said that the two nations have a successful strategic partnership and at the moment their bilateral relationship is going stronger than ever. After the official visit of Peru’s President Ollanta Humula to the Asian country in April this year, the Chinese diplomat Huang stressed how the Peru-China relationship had become more solid and was flexible for both countries.

Ambassador Huang mentioned that “It has been a very auspicious beginning. The meeting between President Humala and President Xi Jinping has updated the relationship between our countries to such an extent that currently Peru is an important strategic partner for China.”

Since the Peru-China Free Trade Agreement came into force in 2011 Huang has noted that firms from both nations have greatly benefited from it. The agreement was designed to eliminate trade and investment obstacles between China and Peru in a bilateral manner. The 2006 APEC summit saw the idea of such a trade agreement being formally proposed for the first time by Mercedez Aráoz, the Peruvian Minister of Trade, to Bo Xilai, her Chinese counterpart.

As of 2006 China has accounted for 9.6% of Peruvian exports and 10.3% of Peruvian imports for a trade volume of $5.5 billion(USD) in 2007, making China the second most important trade partner for Peru.

“This should be the beginning of a much broader relationship, with greater complementation and shared development,” said the China’s top official.

One of the trades best advantages for Peru is that Peruvian companies have the opportunity to enter the Chinese market, which has become the world’s leaving importer of Latin American goods.

With the relationship between these two countries growing from strength to strength Peru could soon be a significant part in world trade as it teams up with one of the the worlds most prolific exporters.