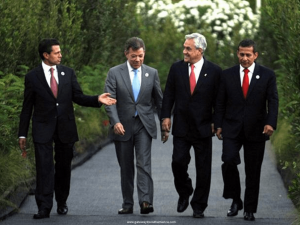 These countries all have strong economies, Mexico and Chile are members of the Organization for Economic Cooperation and Development (OECD) and Peru and Colombia are in the process of applying for membership.

By forming a trade bloc, the countries have further increased their importance in the global market place, as their economies combined make up 35% of Latin America’s gross economic product and have a total population of 210 million people.

The member states now allow Visa free travel between countries, meaning a Peruvian can travel to Mexico, Colombia and Chile without getting a Visa first. This is very useful for businesses trading and traveling between the regions, and is an incentive to have international companies as opposed to national ones.

In addition, the Alliance has decided to share embassies in certain countries, for example in Ghana, all four countries have their consulates under one roof. This saves the countries substantial amounts of money.

The alliance has clear orientation toward increasing trade with Asia, as China is the second largest recipient of exports from the member countries, after the USA. The alliance wants to target economies such as Japan and South Korea, which are also experiencing periods of economic growth. All the member states are members of the Asia-pacific economic cooperation (APEC), showing their commitment to trade with Asian countries.

Hopefully the Pacific Alliance will improve trade between the member states, as well as to other major global markets, thus giving Peruvians more work and continuing the positive economic growth that Peru has been witnessing over the last 10 years.