The importance of China for Uruguay Soya production cannot be overstated

Gateway to South America on 30/07/2013 - 14:40 in All categories of countries are, General of Uruguay, Uruguay Farms, Uruguay Farms

Soya is part of the legume family which originated from Asia, which has a very high content of oil and protein. It is cultivated during the summer season in the southern hemisphere between the months of January and September depending if its a first or second crop, the harvesting takes place between March to May or June each year.

The plant reaches 80 cm in height. It is one of the most consumed grains around the world due to its multiple uses. The grain of soybean and its by-products (oil and soybean meal are mainly used for human food consumption and as fodder for livestock. Soya Oil is also used for the production of bio-diesel.

China was the main world importer of soy representing in 2012 more than 60% of the total claimed value, which shows the high concentration of global demand from the Asian population. In 2008 the participation of Chinese purchases was 49.4% which has been increasing its share in the analyzed period.

The rate of average annual growth of Chinese purchases was 12.5% between 2008 and 2012.  FAO foresees that China will continue with this trend of strong growth, therefore what happens in the country will have an impact on the prospects for global markets for soybeans.  According to the same institution, prices and lack of official action to help production will discourage any expansion of the area sown with oilseeds in China, leaving yields growth as the only factor influencing the growth of production internally. The main supplier of soybeans from China in 2012 was the United States but has now been overtaken by Brazil in 2013. 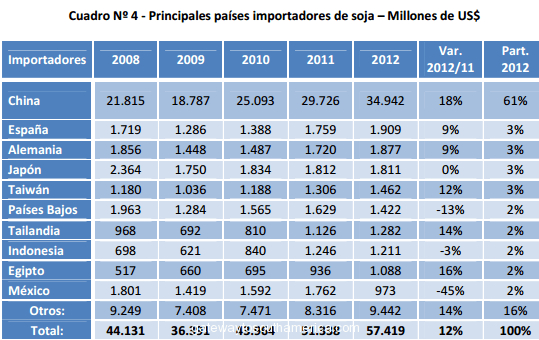 The soybean sector has been gaining share in the Uruguayan economy for several years now, soy is the biggest crop of the country today. For the agricultural year 2012/13 the gross production value of the sector exceeds US $1 billion.  The planted area of Soybean has grown continuously since the 2003/2004 harvest where it reached 247.096 hectares and according to analysts privados the current harvest 2012 / 2013 will exceed one million hectares. In this way the average annual growth of the planted area exceeds 15% between the period. Unlike previous harvests, the current sowing was mostly tofu first due to good international prices of the oilseed and also an incentive to producers due to the good performance of the previous campaign.

Graph Nº 2 is observed that similarly, soybean production has experienced a growing trend over the period, with the exception of the harvests in 2007/08 and 2010/11 where production fell 1% and 15% respectively. Private analysts placed the performance of soybean for the 2012/13 season in 3,000 kg /has, noticeably above the performance of the previous year which reached the 2.390 kg / has. In this way the production for this harvest would reach 3 million tons, representing an increase of 42% compared to the 2011/12 season, marking a record for the country.