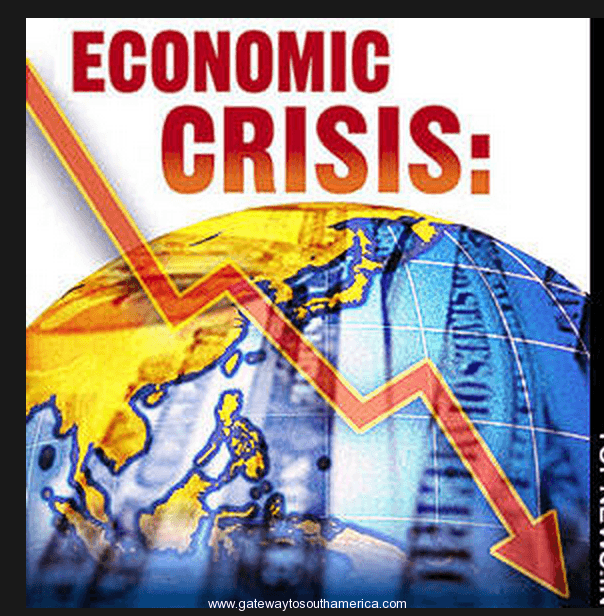 Gateway to South America on 25/01/2019 - 19:23 in All categories of countries are, Argentina-General, Brasil-general en, Chile – General, General of Uruguay, Perú-general en

The World Economic Forum’s Davos summit has confirmed the obvious that the prospective global boom is over.

“Is that it?” might be the repost to the International Monetary Fund’s latest downgrade.

Sure, 3.5% global growth is still impressive and better than a couple of years ago when the IMF hailed “the broadest synchronised global growth upsurge” since 2010.

The real story of global growth is the serial disappointments that have dogged this expansion from the start. For advanced economies, it has been weaker than either the 1990s or 2000s.

Moreover, the world is struggling to sustain even that muted pace. Brazil, China, Germany, Japan, Russia the UK all expanded more slowly last year than their average over the previous eight. Argentina’s peso has now fallen 52% against the dollar this year and industry fell 4.7% against 2017.

The short-term trigger for this is clear enough: Trade conflict, especially between the US and China, and monetary tightening.

But some analysts say this isn’t a fully satisfactory explanation. Central banks flooded the global economy with easy money after the GFC and little of it has been  sucked back.

The reason is that much of the world appears to be stuck in a low-growth equilibrium and can’t tolerate a return to previous interest rate levels.

The “neutral” interest rate – high enough to contain inflation, low enough to avoid recession – is much lower than before.

The recent pause in tightening by the US Federal Reserve has set that neutral rate at less than 0.5% compared with an historic 2%.

The IMF’s Gian-Maria Milesi-Ferretti, who oversees the forecasts, attributes the slow-growth equilibrium to demographics and productivity.

The world’s labour force is expanding more slowly than in the past, as ageing workers retire and birth rates drop in both rich and developing economies.

Productivity gains, which lift wages, are also rising more slowly than before.

In conclusion it is a time for governments to be restructuring there economies to match the new paradigm.