The experience of living in a historic building in Buenos Aires

Gateway to South America on 03/02/2023 - 05:35 in All categories of countries are, Argentina Lifestyle, Argentina-General, Argentine history, Buenos Aires Residential, Lifestyle Properties in Argentina

The emblematic Kavanagh building, located in Florida 1065 is a symbol of the architecture of Buenos Aires and a reference to the Art Deco movement. The construction was inaugurated in January 1936, at the initiative of Corina Kavanagh and was constructed in a record time of 14 months. At the time, with a height of 120 meters, the project was the highest concrete tower in Latin America.

The 105 apartments are distributed over 31 floors and are all different. In addition, the tower has five staircases, private bearings, retail shops on the ground floor and car parking. The project was sold to the most diverse owners: from the family of the businessman Gregorio Perez Companc to the Rocca family which owned Techint. This building, and many others, are a true memory chest and the best storytellers. In time, their neighbours renewed themselves; they changed their customs, their coexistence and even the value of the expenses. But what is it like to live in a historic building in Buenos Aires?

For those who dream of living in the tower, there are some options on the market. Yes, it’s for a few. Currently, the emblematic building’s most impressive and extravagant apartment is for sale. This apartment occupies the entire 14th floor, which used to belong to Corina Kavanagh; it measures 740 m2, of which 475 m2 is covered. The sale price they are asking is  US $3.9 million, or the other option is to rent it for US $11,000 per month.

The remaining 251 m2 corresponds to the terrace of the “Proa”, the “brand” of the construction designer with two gardens. The property has been on the market off and on for eleven years. The funny thing is that the current owner, French Lord Alain Levenfiche, a businessman dedicated to real estate, renovated the property. “The first offer was USD 8 million, but so far, no one has been able to sell it.

It is a property that is like a piece of art that has lost its character “, analyzes Iuri Iszratsoff, director of the real estate company that usually has in a folder of departments for sale in historical buildings. Today, the emblematic floor is rented out for parties. It features smoke cannons, a lighted tiled floor, recessed speakers and a colourful bar. But in addition, the apartment has five rooms, all en-suite, and the largest with 80 and 60 m2.  The living room is divided into two parts with a bar lit as if it were a nightclub. The plus? Its 360 degrees views of Buenos Aires city.

Generally, old-period buildings such as the Kavanagh, the Estrugamou or the Palacio de Los Patos offer spacious units with luxury finishings and privileged locations. This market segment is very exclusive, with rentals historically paid in dollars. “El Kavanagh is one of the masterpieces of the Buenos Aires architecture of the 1930s. In 1999 it was declared a National Historical Monument, the highest category recognised by law 12,665 and its amendments, similar to that obtained by the Palacio Barolo in 1997.

In this sense, owning a department in the Kavanagh, as in any other well-declared building, can be considered an absolute privilege, not only from a perspective of architectural-artistic valuation but by being part of the identity of Buenos Aires, ” explains Teresa de Anchorena, President of the Commission of Monuments and Historical places. This organism protects landmarks of historical heritage value.

In general, the price per m2 in the Kavanagh is from US $3000, although there is a lot of disparity in the prices of the departments depending on their state of conservation. Concerning expenses, these vary between $14,200 and $39,000 according to the surface of each one. The profile of those who buy in this type of building is particular: they are usually not families but people who live alone and are looking to be within walking distance of central Porteño.  For those with a more limited budget, there are options of units from 120 m2 offered at US $400,000.

Just 300 meters away, there is another emblematic construction: The Estrugamou, located in Esmeralda and Juncal streets.  Flirty like no other, it is a true architectural gem dating from 1929 with an entrance that simulates a passage of carriages. “Many of those who live there are historical owners since it is a family asset to continue to have property there. For some, it is aspirational. Many look to live in the Estrugamou and the Kavanagh because it gives them status: they are like the Dakota of New York, “analyzes Isratzoff, who added the Palacio de Los Patos as another example.

The French influences of the building make it a journey through time, with its Slavonian oak floors and beautiful marble making it the closest thing to a small palace. “The Estrugamou is an icon of the city. The people looking for this type of property do not skimp on renovating them to an impressive level, “says Manuel Andreotti, manager of Tizado Barrio Norte. Is to say that belonging has its costs. However, the value of the square metre is not expensive compared to one of the top projects in the north corridor of Libertador Avenue, built in recent years, where the square meter exceeds US $8000. 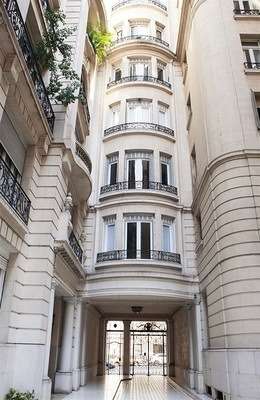 The offer in the Estrugamou is the most varied. For example, a unit of 415 square meters is for sale at US $2.7 million; another four-bedroom unit at US $1.250.000. Although there are specific opportunities, ie a floor of 531 m2 is offered at US $1 million, i.e. US $1800/m2. This is a price that is closer to those in the southern part of the city of Buenos Aires. Of course, the property needs spare parts and is a bit dark as it looks out into the inner courtyard.

“The units of these buildings are a premium product that, although have similar values to those of Puerto Madero, are of much more quality”, adds Andreotti of Tizado, who has four departments of 415 meters for sale to US $2.2 million, with expenses of $24,000. The broker adds that the market for the sale of such departments has slowed down. “We received a few inquiries. It is a very exclusive place, and we are in moments of turbulence, ‘ he says.

In most cases, they are buildings that, in the past, have been inhabited by the high society of Buenos Aires. The family who owned the entire building lived in one of the flats and, with the income paid by the rest of the locals, maintained original services such as the coachman, maids, washing and ironing. It was times when the sale per unit was not allowed, a possibility that enabled the law of horizontal property sanctioned in 1948. One of the main disadvantages of this type of real estate is that, as they were thought of in another time, they lack garages, which implies an additional monthly gesture of $4000 for renting a space to store the car in the area. They are also low-turnover buildings. 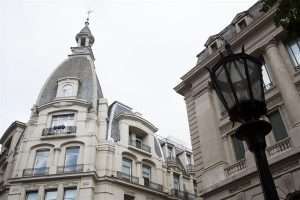 Full of Secrets is also the Raggio Palace. The French-style building located in the very heart of the Porteño neighbourhood of Monserrat-on the corner of Bolivar and Moreno-, a few meters from Plaza de Mayo, was originally designed by the Swiss architect Lorenzo Siegereist in 1907. Inaugurated in 1910, it housed a general store and apartments for rent. But years later, it faded and deteriorated until 2007, when it was taken by about 1200 people who were evicted peacefully. From that moment began a plan of cleaning and restoration to transform it to its former value of a building of 100 years. ” He did a titanic job.

The whole structure was respected, but the layout was adapted to a more modern building, “explains the developer Alberto Fernandez Prieto, president of the development company that bears his surname, the business responsible for this transformation. The project demanded US $30 million, and the spirit was to keep intact the original structure of the building. And so it was done. The architects preserved the gallery surrounding the palace and the exterior façade of the seven-storey tower, but all the interior spaces had to be re-made. The developer acquired the property in 2006 and reformed it between 2008 and 2015. The floors of the venture were built of different heights and oscillated between three and four meters high. In the Palacio Raggio, 150 units of between 30 and 90 square meters of covered surface are distributed in eight floors of 23,000 square meters. According to Fernandez Prieto, the neighbourhoods of the city that have developments planned for an ABC1 public are scarce.

“There are few projects, and that makes them more expensive. They have a market value of more than US $1000 per m2. This causes property developers to start looking for a new focus of attraction, and this place was one of them, “he explains and adds:” We fear that the inability to enter the city centre by car may pull back the neighbourhood. Restrictions on the area are going to be negative. ” The proximity of the building with Casa Rosada caused the palace to function as a magnet for officials, businessmen, politicians and union delegates, who tend to have work meetings with government representatives.

The former minister of the Interior and transport, Florencio Randazzo, and the national deputy of the Renovator Front, Facundo Moyano, were two of the personalities of the policy who chose the charming historical building to install their offices. But also, another diversity of characters has departments, such as the tennis player Juan “Pico” Monaco, the lawyer Fernando Burlando and the model Silvina Luna.

In the Raggio, nothing is randomly delivered. Every little detail is noted: from Páez Vilaro’s paintings in the access lobby to an itinerant photo gallery renewed once a month to give another look to the walls. One of its strengths is that despite being a historic building, it has services typical of the most modern projects, such as a gymnasium, sauna, 24-hour security and even an outdoor pool overlooking the dome of the Otto Wulf building.

Currently, the occupation is 70% offices and 30% housing. Because of its location, some apartments are rented per day or week for tourists. The price is around US $3500/m2; pre-sales just exceeded US $2000/m2, and its expenses are varied according to each apartment, but they start from $4000.