The Current State Of Pastoral Farming In Uruguay 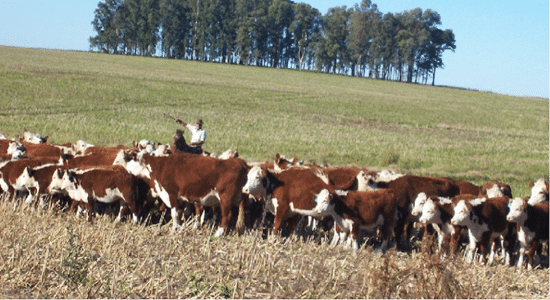 Back in the early years of the 21st century, when soy production began to dramatically increase in Uruguay, many worried voices were heard concerning the future of pastoral farming, the traditional land use. Yet, the URUGUAY XXI 2014 foreign trade report lists meat and related exports as the first product, ahead of soy beans. Do both land uses exclude each other? Not necessarily, because the country still has ample room for productivity increases in its 17:322.000 hectares of gently rolling pastures. The main activity of the country is extensive cattle and sheep rearing, mostly in permanent pastures: natural grassland, fertilized natural pastures, legume improved and annual cultivated pastures. In the 2012-2013 agricultural year there were 11:952.000 ha dedicated to livestock, 2:955.000 ha combined agriculture and cattle and 729.000 ha dairy production. About 16% of that area was improved campo, a percent on the rise in all exploitation types. Animal count was 11.5 million bovine heads (0.74 heads/hectare) producing 1.122 thousand meat tons and 8 million ovine (0.60 heads/hectare) accounting for 95.000 meat tons and 34.000 dirty wool tons. There were also 782.000 milking heads that produced 2.018 million industrial milk tons with improved pastures 57% of the exploited area.

Pastoral farming area is slowly decreasing due to the exponential growth of agriculture (fueled by high commodity prices and smart agriculture practices) and forestry, encouraged by tax exemption laws and the installation of mega paper paste factories. Despite lesser area, bovine head count is relatively stable and milk production increased by 44% between 2006 and 2013. Animal rearing combined with agriculture and forestry is on the rise, as is specialization: lower productivity land is used for cattle breeding while the higher productivity index ones are dedicated to cattle fattening. Ovine heads in 2013 were 26% less than in 2006, mainly due to decreasing international wool prices.

Meat cut identified in the Uruguay Natural restaurant in Milano

Diversified markets: bovine meat exports are highly diversified, with access to the main international importers and high price niches such as Hilton and 481 European Union quotes.

Internationalized industry: 47% of cold storage plants are foreign owned (Brazil, UK, Argentine) but all are prepared to export. There is 35-45% available industrial capacity which would facilitate reaching the 400.000 epc tons of meat the country is capable of producing.

Access to China market: Uruguay has a solid reputation in the biggest emerging market, though it still hasn´t reached a satisfactory activity level.

Pastoral farming profitability depends on international prices and production costs. The need to improve one and reduce the other has led to fewer, bigger and more efficient exploitations. An example is mega dairy Estancias del Lago that will raise and milk 8.800 cows producing its own energy and feed and will process 16.500 tons/year powdered milk. 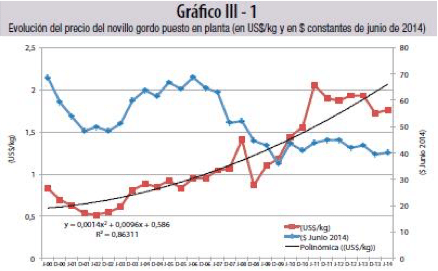 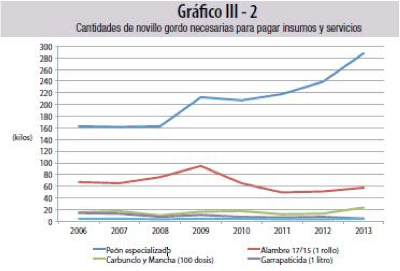 Cattle price goes up, but so do the inputs needed to breed it. Source; (MGAP, anuario estadistico 2014)

Uruguay has a small population and in spite of the impressive 94 meat kilos consumed yearly per person, most pastoral farming production is exported. Since early 2015 there is a new customs code, expected to increase transparency and ease trade.

According to the Uruguay XXI Institute Foreign Trade Report, 2014 was a record year for bovine meat exports: 1.467 million dollars frozen and refrigerated meat, due to higher export prices and production volume. Main markets were the EU (28%), NAFTA (20%) and China (20%). Cattle on the hoof exports –mainly to Egypt and China- reached 140 million dollars, up from 30 million in 2013 while frozen semen exports continued growing since 2013. As of May 2015, bovine meat exports show a 20.4 % decrease in value compared with May 2014, save for cattle on the hoof that reached 50 million dollars (a 35% yearly increase) due to the reopened Turkey market and growing shipments to Paraguay, Hong Kong and United Arab Emirates.

The third export product in 2014 was dairy, mainly to Venezuela, Brazil, Russia, China and Algeria. In 2014 foreign sales (823 million dollars, 9% down since 2013) reflected bad performance in the 2nd semester. The tendency continues in 2015 in a lower international price context, autumn drought and increasing production costs. This year, two direct foreign investment dairy plants closed (Grupo Gloria and Schreiber Foods), forcing the Government to apply mitigation strategies to dispose of the milk in production and protect the producers. The whole sector is on alert, mainly small non automated farms with high costs.

For ovine meat, 2013 exports were 91.9 million dollars. The US market opened in 2014 for boneless meat and negotiations are underway for meat with bone, while the European Union started conversations for boneless cuts.

The OCDE-FAO 2014 agricultural outlook report expects demand for agricultural products to remain firm, though expanding at slower rates. Livestock production will grow at higher rates than crop production. The bulk of this additional production will be in regions were land and water availability and regulations are the least constraining. With the joint effort of land owners and Government geared to improve pastures and genetics, reduce water risks and increase energy and communications availability, Uruguay is well positioned to take part of that growth.