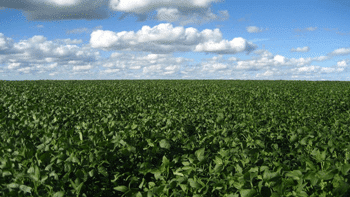 There has been a significant surface expansion (mostly in Brazil and Argentina) in the last three decades, new players are involved (such as Paraguay and Bolivia), and there is a large amount of available land in Brazil.

A study by Bain & Company, a Boston consultancy, forecasts that Argentina, Bolivia, Brazil, Paraguay, and Uruguay together would produce 600 million tons of soybeans and 1.5 billion tons of corn by 2050. To achieve this, those countries would need an annual growth of soybean production between 3% and 4%. While China is the major soybean buyer, 60% of demand would need to come from other developing nations in Asia.

Brazil is highlighted by experts in this scenario. The country, second place in the world on soybean exports and production, is the third largest corn producer and second largest corn exporter. Also, Brazil only uses 12% of its arable land, according to the Ministry of Agriculture. Most of the available lands are located on the fertile soils of northeastern states and the major Center West state of Mato Grosso.

Corn production in 2013-2014 reduced by 3.6% to 78.5 million tons. The country uses internally 53 million tons of the cereal mostly for animal consumption; 21 million tons are exports. The same entity predicts that Brazil would increase production of both grains by 36.7% in five years and see a corn export increase of 5.2% in the same period.

Frederico Schmidt, a market analyst at Priore Investimentos, an investment consultancy based in the southern state of Paraná, says optimizing the beef cattle production in Brazil would be crucial because current livestock areas in the country are exactly the ones with significant grain-production potential. He defends more use of feedlot cattle because that would free up more room to grow beans.

“The number of confined animals would reach 4.4 million this year, but still it is not even 10% of the total herds. It is a very low level compared with the U.S. Roughly, we raise one animal per hectare (2.47 acres). Naturally, this change would depend on meat prices,” says Schmidt.

Seneri Paludo, policy secretary at Brazil’s Ministry of Agriculture, believes farmers will invest in technology and rapidly increase cattle productivity. “There is a very positive relationship between agriculture and cattle. With the technology available, farmers are able to raise four animals per hectare. There is an increase of the use of semi-confined cattle,” says Paludo.

A challenge for Brazil that does not generate big disputes is the lack of infrastructure.

According to Alysson Paolinelli, president of Brazil Corn Growers Association and former minister of agriculture, the country has a storage deficit of at least 60 million tons and would need to increase transportation options in order to take advantage of those opportunities.

“Even with these big problems, the demand for food will double because of significant economic rises in China, India, Bangladesh, and Africa. Brazil is likely to beat those production estimates, but it needs to improve significantly the ports, the storage capacity, and the agricultural policy, in general, to take advantage of this scenario,” says Paolinelli.

Paludo, on the other hand, says the country has investments in infrastructure and subsidies for credit to increase the storage capacity.

“About 10 million tons of grains will be shipped through the ports of northern Brazil soon because of current investments, and this will decrease the transportation costs. This is a real improvement,” promises the official.

Data from the USDA reveals that shipping 1 bushel of soybeans from Mato Grosso to the ports of Santos or Paranagúa in Brazil is about 10 times more expensive than shipping it from Iowa or Illinois to the Gulf of Mexico.

An important factor that will have an impact by the 2014-2015 season is the mandatory addition of 7% of the biodiesel mixture in common diesel in the country. The previous law used 5%. According to official data, Brazil would need about 16 million tons of soybeans for biodiesel in the next crop.

“The use of biodiesel in Brazil will have an impact on prices during the off-season, when there is high demand and low supply,” says Vlamir Brandalizze, a director of Brandalizze Consulting.

Even though there is economic pressure on Argentina’s grain exports, the soybean prices remain profitable.

In the early 2000s, as the Argentinian economy collapsed because of a debit crisis, taxes on the grain exports were applied. As of today, soybean exports have a tax rate of 35%, while the corn rate is 20%. Because of an inflation higher than 30% a year, the government also puts quotas on exports of corn and wheat to generate more internal supply when needed. This year, with the uncertainty in the economy and the current inflation, farmers paid an average of 40% interest rates.

The total grain output currently in the country is slightly over 100 million tons. A study from the Argentinian Association of Experimental Regional Agricultural Consortium (CREA) says the potential ranges from 124.1 million tons to 157.7 million tons.

With the economic pressure in place and adding to the fact that the new agricultural frontiers of Argentina are mostly away from the ports, there is a lesser perspective of a significant increase of production and exports of soybeans.

Guillermo Rossi, information and economic studies director at the Rosario Board Trade, says the positive thing for Argentina is the lack of international providers of corn and soybeans other than Brazil and the U.S.

“Less taxes on our exports would bring a greater earnings margin to allow more sustainable crops currently left because of higher costs. Domestic consumption in Argentina is boosted by the mandatory use of biofuels and the use for livestock. There is also the strong international demand to be added,” says Rossi.

The analyst also defends a bigger investment in railways for the country to achieve its potential more easily.

In Argentina, the mandatory mixture of biodiesel is 10%. “In Argentina, there is a growing domestic demand for biodiesel, and that will have an impact on production, too,” adds consultant Brandalizze.

For Luiz Pacheco, a market analyst from Curitiba, Paraná, the solution for Argentina is not complicated. “Argentina has an extraordinary potential of grain production. It just needs to allow the maximum production that it can produce and then inflation can be controlled and more income and taxes are created,” he says.

“Everything is more costly in Brazil. For instance, industrial costs are higher in Brazil than most other South American countries. The same thing can be said about the infrastructure. The lack of it brings more costs,” she says.

An issue that could pose a threat for the agriculture of both countries is the monoculture of soybeans generated by better international prices of the oilseed compared with corn and the lesser costs involving the crop in South America. The issue is admitted by Argentina’s National Institute for Agricultural Technology and Brazil’s National Agricultural Research Company (Embrapa).

Alberto Bianchi, a former DuPont researcher in Argentina, says,  “Soybeans will no longer be an easy crop to grow” because of lack of new products that can combat weeds tolerant to glyphosate.

“Nowadays, growing soybeans is already harder than in the past, and it may become harder. The weeds are coming more and more because of a repeated use of the same products. The chemical industry has not launched a product with a different mode of action,” Bianchi says.

In Brazil, the corn earworm (Helicoverpa armigera) along with Asian rust generated over US$2 billion of annual losses.

In Argentina and Paraguay, there is a widespread fear of the caterpillar and a growing preoccupation with costs.

Part of an article from AgroSouth-News