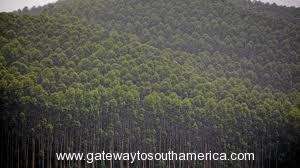 Global trade of wood products has gone up substantially the past two years. Hardwood chip export from Chile, Uruguay and Brail was up 43 percent in 2011 compared to 2009, as reported by the Wood Resource Quarterly. A clear majority of the increase was Eucalyptus chips destined for pulp mills in Japan and Europe.

Wood chip exports from South America are on track to reach a record high of almost eight million tons in 2011, reports the Wood Resource Quarterly. This would be an increase of seven percent from last year and of almost 60 percent higher than in 2006.

Worldwide, forestry shares are low right now, due to the housing slowdown and decreased prices for paper and pulp. But as growth picks up in housing and demand increases, especially for packaging products, timber could be poised for growth. Some investors, including Jeremy Grantham of GMO, are predicting that over the next seven years timber could be the best-performing asset class.

Historically, between 80-90 percent of the exported wood chips from South America have been destined for Japanese pulp mills, but there has been a diversification of consumers over the past few years. Although shipments to Japan have gone up by over 30 percent from 2006, the share of total exports has declined and is currently around 70 percent.

The biggest change from five years ago is that pulp mills in Europe have been buying much more Eucalyptus chip, particularly from Chile and Uruguay. In 2011, total shipments to Europe reached almost 1.7 million tons, which was slightly lower than 2010 but more than a doubling from 2009, according to the WRQ. The three major importing countries in Europe are Spain, Portugal and Norway. In addition, there have also been a few shipments to Finnish and Swedish pulp mills the past few years.

New destinations for Eucalyptus chips from South America the past five years include Morocco, Turkey and China. There are expectations that Chile will increase its shipments to China in the coming years because of higher demand from new pulp mills in the country.

The growth of the middle class in South America is expected to lift sales for companies in the region, especially those with significant regional exposure and products that the middle class uses, such as tissue paper and cardboard.

A separate trend that also bears watching is the move toward greener energy. Forestry can be both a negative on this, due to its extensive demand for energy in sawmills and the production of pulp and paper, and a positive, thanks to its role in new ways of fueling via wood pellets and other sources.

Finally, with new technology trends, especially related to the growth and maturity of specific tree species, South America could emerge as a leader. For example, biologists in Brazil have brought the life of the eucalyptus to about seven years — the point at which a tree can be harvested for pulp. That compares with a minimum of 14 years for the southern pine, which is widely used in the southern United States.

Chile is by far the biggest exporter, accounting for two-thirds of the total shipments from the continent, while Brazil and Uruguay both account for about 16 percent each. In 2011, Chile was the world’s second largest supplier of hardwood chips after Vietnam. South America’s hardwood chip export volumes accounted for approximately 50 percent of globally traded wood chips, a share that has grown from 34 percent five years ago.