South America Spawns Its Own ‘Malibu’

The skyscraper horizon of Punta del Este in the distance feels miles away in the Uruguayan beach town of Manantiales, where a booming luxury market of million-dollar condos and forthcoming luxury hotel has elevated a beach town to global glitterati status — making it suddenly the Malibu of South America. 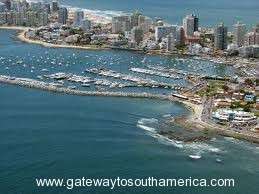 Moneyed Punta del Este has increasingly moved more and more north in recent years, looking to evade the skyscrapers of downtown for more exclusive enclaves such as La Barra and Jose Ignacio. Driving from Punta, rows of skyscrapers yield to rolling hillsides and then grassy dunes and crashing shoreline — and about 20 minutes north, Manantiales. By drawing the line against mass development, Manantiales hopes to maintain its bohemian identity while embracing its growth into what many Americans compare with Malibu or the Hamptons. (Locals proudly tout it to be even more exclusive and expensive.)

For more than a generation, the neighborhoods to the north of Punta del Este have been a summer getaway for posh Argentines on summer holiday who often rent homes by the month or own vacation properties in the area. An economic boom in Brazil is part of the area’s rapid growth, felt through an influx of Brazilian license plates filling the town’s main street from northern cities such as Porto Alegre and Florianopolis. A booming real estate market means home prices have soared, with many owners listing their properties at hopelessly inflated rates only to see their lofty selling prices met — sometimes even exceeded. With most buyers paying in cash and no real mortgage market, real estate insiders dismiss any talk of a bubble as speculation.

Those looking to book a room in Manantiales come up only with apartment and villa rentals through companies such as Oasis Collections with no real hotel option except to the south of town in neighboring La Barra, where properties such as Mantra Hotel and boutique-style Casa Zinc are found. La Barra has traditionally been the “it” town of the area with its fashionable boutiques and hot spot nightclubs. But its bumper-to-bumper high season has sent many in search for chicer, more exclusive areas such as Jose Ignacio and Manantiales.

A residential/retail/hotel development called Selenza Village + Hotel is on the way, however, scheduled for completion in 2013 (and looking very much on target with its canopy of construction cranes). The ambitious project on the northern edge of Manantiales is made up of a 32-room luxury hotel, private residences and condo-style apartments, complete with a national ad campaign and celebrity endorsements. The five-star luxury property will put the town on the global luxury travel grid, much as Estancia Vik and Playa Vik have done in Jose Ignacio to the north. Unlike Jose Ignacio, however, a bustling main street of eateries and bars offers more of an all-day appeal geared toward active travelers.

Consisting of little more than six square blocks flanked by its infamous Bikini Beach on one end and hotel development on the other, Manantiales offers a row of upscale home boutiques, a pop-up shop from Brazil’s Osklen brand and the latest outpost of Flo Cafe, an institution of fashionable lunches and evening coffee culture in nearby La Barra for more than a decade. The new Flo takes on a more architectural feel, with cottage-style design and lofty interiors that befit the more surf-minded soul of the area. Just up the road is a more tried hot spot, namely Fish Market Manantiales — an outdoor open kitchen offering grilled seafood specialties of local whole fish, ceviche and a top-notch grilled octopus. The popularity of the restaurant means lining up for tables after 10 p.m. during January or arriving for a late-afternoon lunch before the kitchen closes from 6 to 9 p.m.

By night Manantiales comes to life as the under-40 set drifts from sunset beach parties and everyone else emerges from their siestas to a selection of casual eateries and haughtier dinner spots that opened in the past year. Dolce Mare could double as a beach outpost of Cipriani with its glassy facade on the bustling strip and all-white interiors (as well as a menu from Piedmont and owners from Turin). Down the block there’s a less formal installment of Sipan Cevicheria Peruana that’s a fashion it spot with sister locations in Buenos Aires and Sao Paulo.

But few can compete with La Linda, which has a former protege of Chef Francis Mallmann overseeing a stunning epicurean space off the main thoroughfare with a menu of foodie staples from across the Rio de Plata region. Forged-iron windows frame a sexy space of concrete floors and open kitchen with wood-fired oven. The kitchen utilizes traditional cooking and baking techniques, and all fruits and vegetables come from La Linda’s organic garden, much to the delight of the bohemian following of surfers and glitterati that define South America’s own version of Malibu.