Each year International Living produces a list that in their opinion reflects the best countries in the world to retire to. Interestingly in 2009 seven of the top ten countries were in South America. I would suspect that unless they change the criteria over the next few years as Europe and the USA struggle to comes to grips with their debt issues, this trend will remain and may even strengthen. We are already seeing a lot of American and Europeans looking to live in Argentina and Uruguay. Unless people are very rich, retiring to other hot spots like Australia or New Zealand and many of the other so called first world countries, is out of the question. This door has closed, just ask the Chinese. 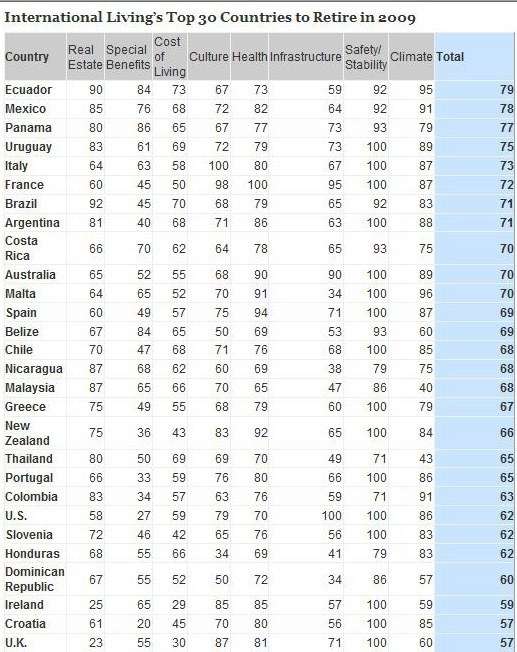 Who is behind International Living

International Living magazine is a web publication for subscribers, detailing the best places in the world to live, retire, travel, and invest. Founded in 1979 by Bill Bonner, IL now has offices and writers located all over the world.  Bill Bonner is a very successful businessman who has created a publishing empire with Travel and Real Estate interests. Whenever you see opportunities promoted by some of the groups contacted with Agora, you will find it likely that they have a real estate opportunity at the end of it. This is where they make a lot of their money. The group now known as AGORA Inc. has grown to be one of the largest and most successful consumer newsletter publishers in the world. #adp02

From Wikipedia, the free encyclopedia

Bill Bonner is an author of books and articles on economic and financial subjects. He is the founder and president of Agora Publishing,  and the principal author of a daily financial column known as The Daily Reckoning. Bonner is also a contributor to the news and opinion blog LewRockwell.com and has written articles for Money Week magazine.

Bonner co-authored Financial Reckoning Day: Surviving The Soft Depression of  The 21st Century and Empire of Debt with Addison Wiggin. He also co-authored Mobs, Messiahs and Markets with Lila Rajiva which won the GetAbstract International Book Award for 2008. He has previously co-authored two short pamphlets – with British media historian, John Campbell and with Financial Times editor, Lord William Rees-Mogg, and has co-edited a book of essays with intellectual historian, Pierre Lemieux.

In his two financial books and in The Daily Reckoning, Bonner argues that the financial future of the United States is in peril because of various economic and demographic trends, not the least of which is America’s large trade deficit. He claims that America’s foreign policy exploits are tantamount to the establishment of an empire, and the price of maintaining such an empire could accelerate America’s eventual decline. Bonner argues in his latest book that mob and mass delusions are part of the human condition.