Gateway to South America on 16/02/2012 - 09:34 in All categories of countries are, Argentina Mendoza, Argentina-General, Argentine farms, Commercial Argentina

With news of the drilling of its first production well, 2012 looks set to be a busy one for Rodinia Lithium (CVE:RM), the development-stage Canadian mineral exploration company focused on lithium assets in North America and Argentina and Nevada, USA. 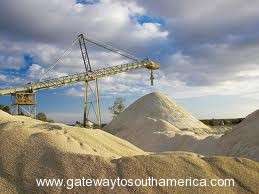 The lithium explorer has interests in four salars – salt deposits – in Argentina. The key salar property is Diablillos, where the company holds 100 percent of the extraction rights for this lithium-potash-boron project in Salta province.

Starting in 2015, Rodinia ramp to production of about 25,000 tonnes of lithium carbonate per year from Argentina, or about six percent of the world’s annual supply, with a co-product of potash, according to analyst estimates.

Earlier this week, the company announced that it would begin drilling its first production well at the Salar de Diablillos.

In November 2011, the company’s preliminary economic assessment for Diablillos indicated a potentially low cost operation with a net present value as high as US$964 million, and a mine life of greater than 20 years.

Operating costs per tonne, excluding potash and boric acid credits, were projected to be as low as $1,519 per tonne of battery-grade lithium carbonate for the base case, and $1,486 per tonne for the 25,000 tonne per year alternative. This for a product that currently sells for north of $6,000 per tonne.

However, including co-product credits that exceed the costs to produce lithium carbonate, combined operating costs were brought below zero, at negative $703 per tonne for the base case scenario. This means lithium carbonate could be stockpiled, and the company would still make money from potash and boric acid sales.

The projected internal rate of returns for the property are the highest when compared to other players in the region, including Lithium One (TSE:LI), Lithium Americas (TSE:LAC), and Orocobre (TSE:ORL).

Speaking to Proactive Investors, Rodinia’s President and Chief Executive Will Randall said: “What really separates [Diablillos] from the rest is that it has the lowest capital cost per tonne of installed capacity of lithium carbonate and the lowest operating costs when you take into consideration our co-products of potash and boric acid.

“What we’ve done post PEA is, of course, start all the work for the feasibility study, and the first step is to drill the first production well so we can extract brine at production levels and fill our pilot ponds.”

Randall himself is an experienced professional geologist and was Rodinia’s Vice President, of Exploration before being appointed to lead the company in early 2010.

With extensive lithium-brine experience prior to joining Rodinia, he played a key role in the company’s acquisition of prospective assets in Argentina. Raised in Argentina, Randall has a strong understanding of the political and operating environment in the country.

Rodinia is actively planning their pilot pond circuit, as well as interviewing a number of reputable groups to assist in the creation and construction of the circuit. Randall is hopeful to be able to provide more details on these developments in the near future.

Also on the horizon for 2012 is an updated resource estimate for Diablillos, “basically putting pushing most of that tonnage up from the inferred category into the measured and indicated”.

All this ongoing work at Diablillos will go into a feasability study, which Randall expects to be released “by the end of the year”.

The Diablillos property is located approximately 145 kilometres southwest of the city of Salta, Argentina and covers an area of 5,786 hectares in the Puna region.

Rodinia’s property covers the entirety of the Salar de Diablillos nucleus and a vast majority of the margin land with only approximately 600 hectares of land in the hands of private individuals.

Meanwhile, at Clayton Valley – which is the only lithium brine resource in the continental United States – Rodinia hopes to restart drilling later this year.

“The idea is to continue drilling where we had success last year and define a resource in the Southern sector,” said Randall.
Defining a resource at Clayton Valley would represent the first compliant lithium-brine resource in North America.

The central portion of Clayton Valley is currently in production by Chemetall, a unit of Rockwood Holdings (NYSE:ROC), and Randall anticipates defining a resource in his company’s portion of the project before deciding the next steps on this project.

The 72,340-acre property is located in the central portion of Esmeralda County, Nevada.

In terms of cash, the company has $4 million on the balance sheet and a work program for the year of approximately $8 million. While this would suggest that a financing is on the horizon, Randall explains, “we have enough cash to continue developing for the next little while, and certainly enough to continue our discussions with strategic groups and potential offtake partners. Obviously we’ll need more money at some point this year, but as it stands we may not need to come to market in order to raise it”.

In terms of supply and demand fundamentals, Randall said that over the past year, demand was has increasing but supply hasn’t been increasing at the same rate.

“That’s a trend that will be very positive for us.”

Global demand for lithium carbonate is mostly from lithium batteries and power grid storage applications. A key driver of battery demand is the electric vehicle sector, particularly in China.

In this regard, the company already has a strategic investment from Shanshan Resources, one of the world’s largest producers – and China’s largest – of materials used for the manufacturing of lithium ion batteries.

Rodinia is already working to secure an off-take agreement with Shanshan and a handful of other potential suitors.

“What we’re trying to do is work a deal that maximizes value for our shareholders and will secure us a large portion of the capital funding required to put the project into production. We’re a year away from starting construction, so we have a up to a year to negotiate more money rather than less, but we hope to finalize this deal sooner.”

Another driver of demand is renewable energy storage from sources such as wind, solar and tidal energy. When energy is generated, it is not necessarily used at that time, so it must be stored until needed.

“Those cell packs use a huge amount of lithium carbonate,” Randall said.

Asked about potential consolidation in his sector, Randall pointed out with sector market valuations at current low levels, “you would think the majors would be looking at this as the right time, if there was going to be any kind of consolidation”.

“It would probably be a good move by the majors to start buying a few of these [lithium plays] up, perhaps the ones they feel have the potential to be low-cost producers, but there hasn’t been anything yet in the space.”

A recent analyst note from Byron Capital Markets identified that Rodinia was “trading at a steep discount” and with a market capitalization of around $23 million, was “significantly cheaper” than the three other brine projects that have market capitalizations of at least three times as much.

Rodinia’s Randall is not out looking for a bid but would consider an offer “if the right offer comes at the right time and it makes sense”, since the company’s focus has always been to develop assets to their full potential.

“We always aim to put our assets into production – that’s the main focus of management and we have a team that has experience building and operating lithium projects, both brine and hard rock.”

Overall, Randall said the company has had relatively few potential delays on its path to production.

“I think that’s going to help us out in the medium-term and the long-term.”

Among the advantages the company enjoys is the fact that it can “produce more potash per tonne of lithium carbonate” due to the low sulphate levels at Diablillos, allowing for easy recovery of potash.

Also, the flagship Diablillos project is located in a “very stable” mining jurisdiction.

“There is a precedent for a fully permitted lithium operation in Salta and this occurred within the last two years. This suggests that we have should have a clear process to follow to put this into production in a timely manner from a permitting point of view.”

“In addition, we control 100% of the asset so we don’t have to worry about competition or litigation resulting from a shared liquid resource.”

Just as important, the entire basin is free of wildlife and aboriginal communities. Therefore, we don’t see any opposition on the use of fresh water, grazing ground, etc. We truly believe we have the right recipe and environment to move Diablillos into production.”