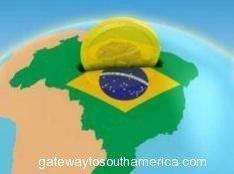 Gateway to South America on 30/06/2014 - 17:22 in All categories of countries are, Brasil Residential, Brasil-general en

Investors worried about an overheated Chinese housing market need only turn to Brazil. This real estate market has legs. And the recent five-year real estate boom there has a good five more years before home values stop appreciating. Housing prices have cooled in recent months, but are rising year over year. Interest rates are falling to single digits once again as inflation begins to ease on account of the global economic slowdown taking its toll on Brazil.

That hasn’t stopped the fact that Brazil’s middle class is now the majority of the population for the first time ever and they have money to burn. So what’s with the 2017 deadline? In 2016, the Summer Olympics come to Rio de Janeiro. Oliveira at Patrimonial thinks demand for both housing and commercial properties will remain relatively high until things slow after those parties are over.

“There’s a psychological margin that Brazil real estate enjoys at the moment due to the oil discoveries off the coast of Rio, the World Cup and the Olympics, which makes Brazil very attractive to foreign investors at the moment. But after 2017 Brazil will still have its oil discoveries, but the World Cup and Olympics will be done with and foreign investment into Brazil will slow as a result,” Oliveira said, adding that the middle and lower classes would have spent more than 10 years acquiring properties and supply could outweigh demand by 2017.

Until the global economy looks more balanced, and that depends on Brussels and Washington for the time being, the fundamentals of Brazil real estate have probably never been so good.

Contact the Gateway to South America team to learn about the best investment opportunities in the region. The company is a benchmark for foreign investors wishing to invest in Argentina, Brazil, Chile, Paraguay, Peru and Uruguay, providing expert advice on property acquisition and investment tours. www.gatewaytosouthamerica.com