Gateway to South America on 28/11/2013 - 16:20 in All categories of countries are, Brasil Residential, Brasil-general en 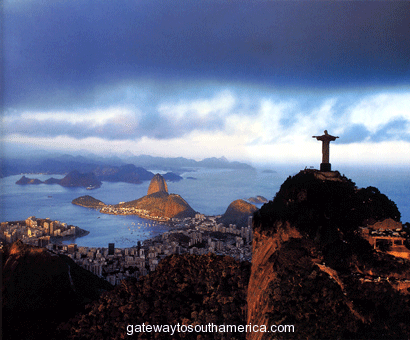 Being part of the economic acronym BRICS, Brazil has become an area looked at for global investment as it has been deemed at a stage of newly advanced economic development, suggesting their economies will catch up to the more developed countries in the next few years to come.
•   One of the world’s most beautiful cities and a major tourist destination

Photos of Rio de Janeiro are often seen around as it’s stunning and unusual landscape lends itself as a place to be admired. It is home to some of the most iconic things to see such as Christ the Redeemer and sugar loaf mountain as well as offering an abundance of stunning beaches, waterfalls and cultural outings.
•   Annual Carnival is famous globally and it attracts visitors from around the world

It is a world famous festival and considered the biggest carnival in the world with 2,000,000 people per day on the streets. The parade and the constant drum beat throughout the Carnival as locals and tourists party the days away together is a once in a lifetime experience and should be part every persons bucket list.
•   Largest oil find in the Western Hemisphere off the coast of Rio
•  2014 World Cup and the 2016 Olympic Games Witnessing unprecedented investment both from public and private sectors.

In Rio de Janeiro, the Brazilian Ministry of the Environment, the municipality and state of Rio de Janeiro, and the US Environmental Protection Agency have begun work on a bilateral project that seeks to coordinate public and private investment opportunities in Rio, in anticipation of accelerated private infrastructure and other investment due to the World Cup in 2014 and the Olympics in 2016. This project aims to support the directing of investment towards the development of a sustainable Rio. A sustainable Rio includes efforts to extend public transit systems and transit-oriented development, improve water and waste management, and revitalize Rio’s bays, so that access to economic and social opportunities for people of all classes is tied to investment and development criteria.
•   Real estate prices steadily rising, currently around 20% per annum

According to Knight Frank’s Global Real Estate Index released earlier this year, Brazil ranks No. 3 in the world and No. 1 in the Americas for rising home prices. Only ridiculously expensive Hong Kong and Dubai, which are not countries, have seen prices rise more. So in fact, no single country has seen its housing prices rise as much as Brazil.
•   Third most populous state, with 15.9 million inhabitants
•   Huge population surge over last ten years creating housing demand
•   Unemployment steadily declining

Brazil’s unemployment rate fell to a record low in October. The jobless rate in Latin America’s biggest economy dropped to 5.2 percent from 5.4 percent in September – and down from 5.5 percent from October 2012 — according to the Brazilian Ministry of Employment.
•   The state of Rio accounts for 25% of the Foreign Direct Investment in Brazil