Rio de Janeiro Carnival – Bigger than ever – Book now for 2020

Gateway to South America on 11/03/2019 - 15:44 in All categories of countries are, Brasil Residential, Brasil-general en, Brazil Farms en 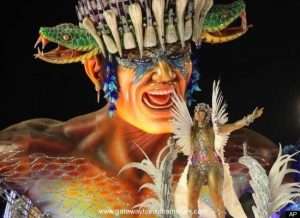 When is Carnival?
Rio de Janeiro Carnival starts on, February 21th 2020 and ends on Fat Tuesday, February 26 so you have missed for this year so you need to book for 2020 now.

Which Carnival is the best in Brazil?
Carnival in Rio de Janeiro, Olinda and Salvador all clamor for this title. The Carnival in Rio is definitely the biggest and most famous, not just in Brazil but in the whole world. And it is most visited as well. Hence Rio is dubbed the Carnival Capital of the Globe.

Where should I stay in Rio?
Try to stay in Southern Rio (the Zona Sul), which is not just the most beautiful area but also offers the best infrastructure and is the safest. Copacabana, Ipanema, and Leblon are the best, most up-market and priciest options, especially the last two. Botafogo, Lapa, and Flamengo are more down-market but still within 15-20 minutes from Copacabana and Ipanema by subway, which runs 24 hours during Carnival.

When should I book?
Book flights and accommodation at least 4 months in advance. Get tickets as early as possible. The best tickets sell out early and prices usually increase as time passes.

Which events should I attend?
Rio Carnival’s highlight is the Samba Parade. Go to a few balls especially to the Gala Ball in Scala. Join in as many street parties and street band processions as you can, both downtown (Centro) and in South Rio (the Zona Sul). Sample at least one samba school night.

Which are the best street parties?
The street band of Ipanema is the most famous and flamboyant one. The parties downtown (e.g. Cordão do Bola Preta) are the biggest.

Which are the best balls?
High society attends the Magic Ball at Hotel Copacabana Palace. For fun and a big night, dance go to the Gay Gala Costume ball in Scala.

This is a small sample of the Carnaval samba parade in Rio de Janeiro. It covers one out of the 14 parades to happen during two days and flashes of some of the other 13 parades.

The origins of carnival date back to the ancient Greek spring festival in honor of Dionysus, the god of wine. The Romans adopted the celebration with Bacchanalia (feasts in honor of Bacchus, the Roman equivalent to Dionysus), and Saturnalia, where slaves and their masters would exchange clothes in a day of drunken revelry. Saturnalia was later modified by the Roman Catholic Church into a festival leading up Ash Wednesday. It quickly evolved into a massive celebration of indulgences – one last gasp of music, food, alcohol, and sex before Lent – before the 40 days of personal reflection, abstinence, and fasting until Easter (not exactly what the Church probably had in mind). 40 days of purging sins, preceded by a week filled with virtually every known sin. The word itself comes from Latin, “Carne Vale” or “Farewell to the Flesh”.