Gateway to South America on 07/05/2012 - 16:40 in All categories of countries are, Brasil Residential, Brasil-general en, Brazil Farms en

The city of Rio de Janeiro is known around the world for its natural beauty, gorgeous beaches, friendly people and its yearly “Carnaval”. 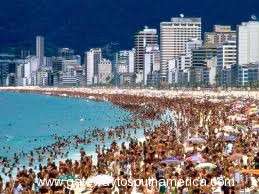 These are qualities most cities would envy, and the city’s selection as the host of the 2014 World Cup and the 2016 Summer Olympics will provide an opportunity for the world to gain a deeper understanding beyond what is on the surface.

Known as the “Marvelous City” for its colorful atmosphere and environment, it has long been a top destination for tourists, but Rio hopes to become a hot spot for business and investments as well.

When people think of Rio de Janeiro, the city usually comes to mind, but the state that shares its name is just as important to the region’s economic development and diversification.

Hosting the world’s two largest sporting events will certainly help to put the city and the state on the map, but behind these events, there is much more than meets the eye.

Between 2011 and 2013, the state will generate public and private investments totaling $102 billion. This will make Rio the largest investment hub in the world, with investments equal to more than $5 billion per square kilometer.

There are underlying structural factors that now place the state of Rio de Janeiro on an equal footing with many nations. The state’s GDP is equivalent to that of the entire country of Chile.

In addition, Rio has a large, upwardly mobile population of 16 million and an unemployment rate of 5 percent, which means the state is in prime position to prosper and receive even more investments.

An abundance of natural resources also drives the state’s development. The state’s current and projected oil production is almost as much as that of some members of the Organization of the Petroleum Exporting Countries. This sector of the economy is expected to grow due to the ongoing discovery of new oil resources.

The combined effect of these positive factors is creating an attractive business environment and facilitating increased investment opportunities.

Commercial real estate sales and rentals in the city of Rio are now priced higher than offices in the most sought-after buildings in New York’s Manhattan.

Thus, it is understandable that while the state is also ripe for investment, it is the city of Rio that has been responsible for 25 percent of Brazil’s entire foreign direct investment.

The Federation of Industries of the state of Rio de Janeiro is one of the biggest Brazilian business entities, and its message is clear: Investment in Rio is no longer a choice. It is now an essential business move, according to the federation.

“My mission is not only to create a friendly business environment but also to lead investors in the right direction so they are properly informed and convinced that Rio is the place to invest,” said Julio Bueno, the secretary of economic affairs for the state of Rio.

“Brazil’s economy cannot depend on just commodities. We need to become a creative economy; one based on innovation, technology and creation. That is what Rio has to offer,” Bueno said.

“Furthermore, the synergy and collaboration among CODIN (which is a State-owned industry development company), Rio Negcios, Invest Rio and my office are integral parts of successfully promoting, informing, educating and attracting investment to the state.”

But the city and the state have fought hard to earn this prime position. Less then a decade ago, the scene was very different. State of Rio Governor Sergio Cabral said the state has come a long way since the days before his administration took over.

“Rio is now on the right path. When we first took office in 2007, the state found itself destitute, with an oppressive lack of resources,” Cabral explained. The situation was so dire that debts were out of control, and the state could not afford to tackle the pressing issues of health, education, security and infrastructure.

The turnaround has been staggering, but the governor does not want to stop there. “By 2010, we had already received an investment grade from Standard and Poors, and we were the first state government in South America to achieve this, so it was a huge achievement in relation to how we handled public policy,” he claimed, adding that “we are keeping this focus on effective management because it enables other public policies and investment creation to be successful.”

The state governor’s office and the city mayor’s team have worked hard to turn Rio into an investor’s dream. At the same time, they have improved quality of life in the city while readying it to host the two major global events. It has been a hard slog, but the rewards are paying off on a grand scale.

The joint effort sums up what Rio and its people are about, said Marcelo Haddad, CEO of Rio Negcios. “We have a quality of life most would dream of, and we also now have a booming business environment to go with it,” he said, adding a few words of advice, “in Rio you work hard, but you enjoy life as well.”

The advice of working hard and enjoying life is starting to become even more important as Rio rapidly becomes an investment powerhouse capable of attracting substantial financing.

The city and its people will need to continue the hard work as investment pours in, but they will also be able to enjoy the fruits of their labor.

The wider state of Rio is on track to receive at least $102 billion in investment over the coming two years, a 70 percent increase on the preceding two-year period.

The investment will include public and private investment, both national and foreign.

Some 75 percent, or $77.3 billion, is destined for industrial development, with Petrobras contributing $60 billion and manufacturing accounting for almost $17 billion.

Among the industrial investments, Comperu – the largest project underway in the entire country – stands out from the crowd.

The plan envisages development of a huge refinery along with a steel mill in the Au Port Industrial Complex.

It also incorporates the expansion of the already renowned Gerdau plant in the state of Rio.

During the three-year period the two shipyards will receive $3.4 billion.

Of the $20.4 billion earmarked for infrastructure, almost half – $9.4 billion – will go to investments in energy, including the construction of the third Brazilian nuclear power plant which is already underway, and a thermoelectric coal plant of 2,100 mW in the Au Port Industrial Complex, as well as substantial investments in renewable energy.

In the sectors of transport-logistics and urban development, the ongoing construction of the Au Port Industrial Complex will require investments totaling almost $1 billion.

As well, deployment of rapid transit bus systems in Rio de Janeiro will require $1.2 billion and the Porto Maravilha – or Wonderful Port – project to revitalize the capital’s dockland area will need $1 billion.

The revival of the dockland area Porto Maravilha will prove to be one of the largest and most ambitious financing initiatives. The project will generate joint public and private investment of $3 billion and will include urban infrastructure, residential housing, entertainment facilities and the development of local businesses.

The project is expected to create at least 40,000 new jobs and bring in an extra $200 million a year in new taxes.

Among the $102 billion planned for the period, about $6.5 billion will be related to the 2016 Olympic Games, of which $3.3 billion will be funded by both the public and private sector for hotels, infrastructure and refurbishment or construction of Olympic venues.

The level of current and planned investments, will make Rio a center of excellence across many sectors of Brazil’s economy.

It is home to Petrobras, regulatory agencies and research institutions making it the oil producing headquarters of Brazil.

The city can also boast large clusters of energy, R&D centers and also has the largest number of IT professionals and students in Brazil, in addition to being home to mega companies like Vale and Eike Batista’s EBX Group.

Marcelo Haddad, CEO of Rio Negcios, explained that “we institutionally promote Rio as one of the world capitals of energy and the highest growth center of research and development in the country”.

He also described how Rio will stay on track to remain one of the world’s strongest investment hubs.

“In 2012 we will continue contributing to the economic legacy of the city, promoting this unique moment with large investments in infrastructure and energy so the city can assume its place as a truly global city,” he said.