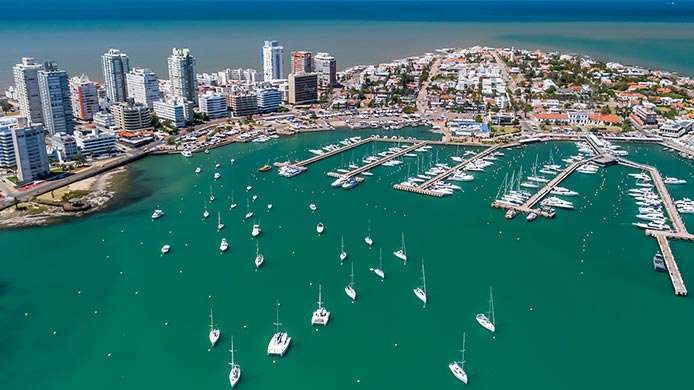 Punta del Este is a small but well-known resort town located in southeastern Uruguay, about two hours by car from the capital city of Montevideo. Situated on a peninsula jutting out into the Atlantic Ocean, it is known for its beautiful beaches, high-end shopping and dining, and vibrant nightlife. With a population of just over 20,000 permanent residents, Punta del Este’s population swells to over 100,000 during the peak tourist season, which runs from December to February.

Punta del Este is often referred to as the “St. Tropez of South America,” and it is easy to see why. The beaches here are some of the best in the region, with crystal-clear water and fine, white sand. The most popular beaches are Mansa Beach and Brava Beach, both of which offer a variety of water sports and other activities. The town also has several parks and gardens, such as the botanical gardens at the Isla de Lobos, which is home to a variety of plants and animals.

One of the main attractions in Punta del Este is the shopping. The town has a number of high-end boutiques and designer stores, as well as more affordable options. The main shopping area is located along the main street, Avenida Gorlero, which is lined with shops, restaurants, and cafes. The Punta del Este Shopping Mall is also a popular destination, with over 200 stores and a food court.

In addition to shopping, Punta del Este is known for its dining scene. The town has a wide variety of restaurants, offering everything from local Uruguayan cuisine to international options. Some of the best restaurants in Punta del Este are located along the marina, such as La Carreta and El Chiringuito, both of which offer excellent seafood and stunning views of the harbour.

Punta del Este is also known for its night-life, with a number of clubs, bars, and casinos to choose from. The most popular area for night-life is La Barra, which is located just outside the town centre and is home to a number of clubs and bars. La Barra is especially popular with younger visitors, and it is not uncommon to see people out dancing and partying well into the early morning hours.

One of the most popular events in Punta del Este is the annual Punta del Este International Film Festival, which takes place in January. The festival attracts film industry professionals from all over the world, and it is a great opportunity to see some of the best films from Latin America and beyond.

Overall, Punta del Este is a vibrant and exciting destination that offers something for everyone. Whether you are looking for beautiful beaches, high-end shopping and dining, or a lively night-life scene, Punta del Este has it all. It is no wonder that it is one of the most popular tourist destinations in South America.

Share
Share
Tweet
WhatsApp
Email
0 Shares
0 POST COMMENT
NEXT ARTICLE
Argentina has the most Golf Courses in Latin America
04/01/2023 - 10:45
PREVIOUS ARTICLE
Properties in Buenos Aires for Sale. The answers to 12 key questions that reveal if this year will be a good time to buy
03/01/2023 - 17:36