Gateway to South America on 15/07/2016 - 18:23 in All categories of countries are, Argentina-General, Buenos Aires Residential

Urban renewal of the old quarter in Puerto Madero luxurious and secure, has been a great success; sales of real estate, still under construction, is something that was not usual before in Buenos Aires. Buyers paid a down payment before the first stone was laid. Barcelona, Rotterdam, Sydney, New York and Cape Town are examples of the model they had in mind.

Currently, Puerto Madero is much more than just a port district; it is a project of urban renewal and is portrayed as being one of the most successful. Luxury and safety are its hallmarks.

Fifteen years ago, a beautiful bridge called Puente de la Mujer, a stylised design of the Spanish architect Santiago Calatrava, was inaugurated. The bridge turns 90 degrees to allow the passage of tall ships and is surrounded by the most beautiful images of the neighbourhood. It has been illuminated at night since 2005 and is the postcard that travels the world from the riverside neighbourhood of Puerto Madero.

Safety and luxury are not the only explanations for the success of this area. The views from the apartments – at any time of the day or night – are extraordinary.

With all the good characteristics of a neighbourhood of excellence, it is also very close to the main political and economic centres of the city, located just ten blocks from Plaza de Mayo, Puerto Madero is placed in a privileged position.

Within the planning and development of the renewal project, the history of the place has been retained. Old brick warehouses, which in the 1900’s were the warehouses and offices of various British shipping companies, were more recently very successfully remodelled. The reddish bricks of the sixteen docks have been used for different purposes: a university, restaurants, apartment lofts, luxury offices and a cinema.

The second precedent of renewal is an agreement between the Buenos Aires  authorities and the City Council of Barcelona: a contest was called for and the best proposals formed an integral part of the project.

“The most important thing to emphasise is the high ratio of green areas and magnificent balance between commercial, residential and office areas. That is, the renewal project considered a new neighbourhood that has everything you might need. You can live, work, study and relax in Puerto Madero but close by, just for pleasure, go to the neighbouring ecological reserve of 360 hectares or sail on the river,” comments Romina Dipaolo, a GTSA Puerto Madero real estate agent. 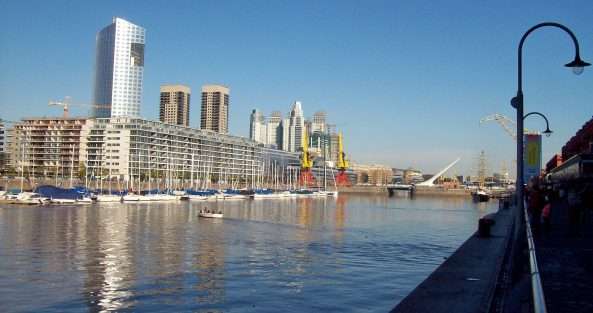 Puerto Madero stems from the need for appropriate facilities – in the late nineteenth century – to serve the growing international trade in agricultural exports to Europe. The engineer Eduardo Madero presented his project, which was built, hence the name of the port.

The original port was quickly abandoned – in less than 30 years – because its design did not consider the increasing size of ships crossing the Atlantic. The decline of the area lasted more than 50 years. 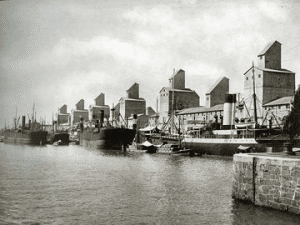 The district borders San Telmo, Monserrat and San Nicolas in the west, Boca in the south-west, Retiro to the north-west, and the Costanera Sur Ecological Reserve and the Rio de la Plata to the east.

The geographical location of Puerto Madero places it under the jurisdiction of the Naval Prefecture of Argentina, commissioned to safeguard the security of port areas. Although it is now a mixed area, it remains under the protection of the prefecture, which partly explains the high level of security available to the entire neighbourhood. Also, private security is offered at each development.

Four years ago, one of the real estate projects was recognised as the Best Mixed-Use Project of America by the International Property Awards. At the time, Alejandro Ginevra said: “That Puerto Madero has been highlighted as the best mixed-use project in the America’s, it is an extremely important event, not only for us but also for the country, as it demonstrates that we remain competitive – at world level – within the real estate sector.”

However, Buenos Aires, as in other large cities, has a high level of vehicular traffic and a shortage of public parking  on weekdays. At Puerto Madero, an underground parking facility is being evaluated to definitively resolve that issue.

In the meantime, a contribution to the vehicular congestion is an innovativealternative transport service on the river, which connects Puerto Madero and Nordelta, with stops in Olivos, San Isidro and San Fernando. The service, for now, only operates on weekdays.

The Image of Puerto Madero Luxurious and Secure Suburb

Puerto Madero has honoured some of the most distinguished women of Argentina. The names of the streets: Azucena Villaflor, Alicia Moreau de Justo, Nini Marshall and Aimé Paine were chosen in a survey. We can say it is a development in which all the details have been taken care of; they have not left any detail to chance. 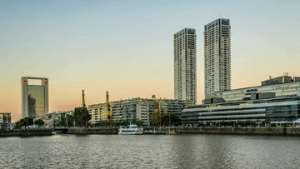 Now with 12,500 residents, it has a very low density but is expected to increase further in the coming years, as long as the projects in the building pipeline are built. According to the city government, it was the fastest growing area in the past year.

Another major attraction is the Puerto Madero Yacht Club. Nautical lovers moor their boats there. It is enjoyed safely by kayakers and canoeists, and most importantly, within a short walking distance of their homes.

For the future, further consolidation of the lifestyle of Puerto Madero is expected. Delivery of new apartment buildings now under construction will incorporate even more residents into the neighbourhood. Buyers eager to have a place in this well thought-out and developed sector will find most new developments are pre-sold.

Residing in Puerto Madero and having that exclusive postal code is a mark of success many aspire to within Buenos Aires’ upwardly mobile new rich.

In any event, living in the most luxurious and secure sector of this wonderful city is a privilege only available to the very few.