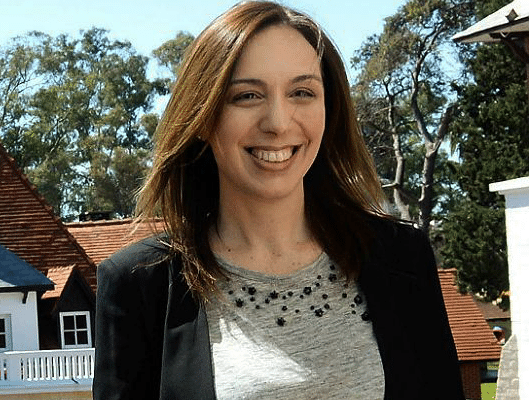 María Eugenia Vidal has been the Governor of Buenos Aires Province for the past 3 years. Comparing these three years with what was done in the 28 years of uninterrupted Peronist Rule in the province makes her long list of achievements more than impressive: 700,000 homes with new sewers, one million more people with potable water, 1,800 completed works and 1,100 in execution, the resurfacing of 22 routes in 41 municipalities, 25 State offices in vulnerable neighbourhoods, almost all hospitals renewed, internet in 5,000 schools and 101 municipalities with SAME ambulance services plus 1,000’s of replacement new homes for the poor, are among the main visual achievements.

However, below the surface, her administration has achieved even more milestones: the largest being a hydraulic structural work to stop chronic flooding. Many of these have low visibility and do not give her political points since they will be inaugurated in the next term, whoever that governor may be.

These days, in the heart of the Humid Pampa region of Buenos Aires Province, between dredges, cranes and excavators, the key projects are progressing almost incognito: the dredging and channelling of the Salado river basin, which is costing more than 1.5 billion US dollars will be finished between the end of 2021 and 2022.

It is a project that will change the reality of thousands of farms and urban areas because it will make productive 1.2 million hectares in 61 municipalities that have been flooded for decades.

“It work that is going to change the life of the province”, assures the minister of Agribusiness, Leonardo Sarquís.

Vidal’s electoral challenge is that whilst Buenos Aires Province is the richest agricultural province in Argentina, it also has some of its worst slums.

Many of its inhabitants are foreigners who have come to Argentina to exploit its free healthcare and education system from poorer neighbouring countries but failed to find work and so rely on social security or crime to survive. These people are not interested in democracy, the environment or Argentina’s future but day to day survival. This makes past populist politicians who promise the world sound attractive.

The other major challenge she faced when taking over the Provinces administration was corruption at all levels, mafia unions and drug cartels.

She took this issue head-on by first firing 12,500 police officers for corruption, putting 850 of them in jail; mounted 116,000 operations against drug trafficking, with 130,000 arrested; the seizure of 71,000 kilos of marijuana and 5,800 kilos of cocaine leading to a large drop in the rates of homicides and kidnappings  but not  yet in robberies and petty thefts.

She has introduced transparency in the public services never experienced before in Argentina. For example all Police Chiefs (14,500 ) must comply with checks on their personal assets each year. Many resigned to avoid doing this.

She has introduced new crime-fighting technology: The ability to report crimes from cell phone applications and facial recognition cameras have resulted in a large increase in capturing criminals and reducing crime.

Because of her unswerving commitment to improving lives in her Province, she has paid a huge personal cost including her marriage, and having to have her family of young children live under high security. We wish her well.