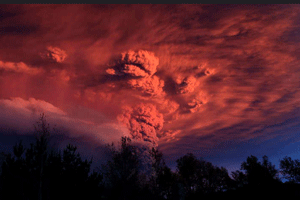 While air passengers from Argentina to Australia still suffer travel misery from Chile’s volcanic ash cloud, Patagonian farmers have a far graver problem of what to do with 1.5 million sheep with little of no feed to eat. Since the Puyehue volcano erupted June 4 2011, thousands of tons of ash and volcanic debris, which quickly turns to sludge, has rained down on pastures in the southern Argentine provinces of Neuquen, Rio Negro and Chubut. From the Chilean border to the Atlantic Ocean, sheep and cattle farmers are fearful that fields of ash are doing irreparable damage to their flocks and herds and are struggling to face up to the grim economic consequences. It could take one to two years for the pastures to recover. Farmers have only three possibilities: shoot the animals shut the animals in sheep yards and feed them hay or move them away from the area altogether. Putting the animals in pens is not an option for larger ranches.  At great expense they will or have already moved them to other locations in the South. Across the border in Chile, the Puyehue volcano continued to spew out lava and geologists voiced fears of another explosion — more bad news for farmers fearful of losing their livelihoods. The volcano has also taken its toll on local wildlife, including the deer that are hunted from March and have long been a lucrative drawcard for tourists. If the ash continues to fall for weeks and months to come, farmers in a region home to some 1.5 million sheep and tens of thousands of cattle fear a real agricultural disaster. Argentina has the world’s highest consumption of beef , the best quality and is the third largest beef exporter after Brazil and Australia. Only a few years ago it was around 95kg per man women and child but world price increases have lowered consumption to around 69kgs. Similarly the Tourist industry of Bariloche and close by tourist meccas of  Villa La Angosutura amongst others have been all effected adversily. Keep in mind the ash damage is a narrow band so only a few kilometers south or north there is little or no serious damage and life goes on. We hope this angry volcano will soon retreat and allow people to once again enjoy one of the most picturesque places on the planet. However every cloud has a silver lining. These ground  conditions are expected to last for a year. After that period the volcanic ash starts to be incorporated into the soil. Then farmers can look forward to a natural boost in soil fertility followed by record growth conditions after 2- 3 years based on previous experience with volcanic ash falls in this region. Warren Houlbrooke GTSA – Patagonia warren@gtsa-argentina.com Farm and Lifestyle Consultant