Peru’s new Oasis in the Desert – The Olmos Project Performs 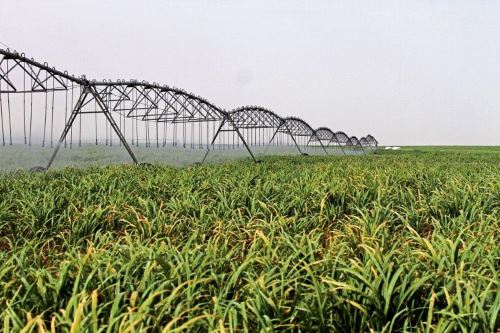 Peru’s Olmos Valley might be a desert now, with rare rains and rivers that trickle to life for just a few months a year. Still, a radical engineering solution for water scarcity creates an agricultural bonanza.

Sugarcane, avocado, cranberry, asparagus and table grapes are the main products grown on the 22,000 hectares of land that were incorporated in 2014 into agriculture with the implementation of the Olmos Project in the Lambayeque region of Peru.

Sugarcane cultivation represents almost half of the agricultural area installed in this Lambayecano valley, with 10,729 hectares and another 5,728 hectares dedicated to avocado cultivation.

“Sugarcane is the crop that has the most significant extensions.

Freshwater that now tumbles down the eastern flank of the Andes mountains to the Amazon basin and eventually the Atlantic Ocean instead moves west through the mountains to irrigate this patch of desert on Peru’s coast. It then drains into the Pacific Ocean.

The Herculean project to reverse the flow of water and realize a century-old dream was, in many ways, the most critical water work ever in Peru. It could serve as a blueprint for construction projects needed to tackle worsening water scarcity elsewhere.

Call it extreme engineering in the age of global warming.

“All of this will be green,” said engineer Giovanni Palacios, looking out over miles of brown shrubbery at a construction site he oversees for the Brazilian firm Odebrecht.

Palacios is the director of the Olmos Irrigation Project, an ambitious that started in 2014 – a previously unproven vision with a USD 1.6 billion price tag.

It has included drilling a 12-mile tunnel through the formidable Andes to capture abundant water flows on the other side. That feat required a drill 1,000 feet long.

It aimed to fix Peru’s most emblematic water problem. Rainfall on the coast averages six inches (150 mm) per year. The project came online as Peru’s tropical glaciers, a source of fresh water for millions, melt away with rising global temperatures.

“This is now sugar cane, avocado, and passion fruit, and people everywhere will be working, planting, harvesting, and packaging.

The Olmos project, which critics say benefits mostly big agricultural companies rather than small farmers, is the most ambitious of seven massive irrigation works that turned swaths of desert valleys near Peru’s coast into profitable, producing fields.

Most of the projects tap a few glacier-fed rivers along the Pacific coast. The Olmos irrigation project, however, is the first of at least two that will pull water destined for the Amazon to the coast to feed crops.

It shares similarities with works that have drawn drinking water across the mountains to Lima’s capital for years.

According to the United Nations, Peru is one of the countries most exposed to climate change, and Lima is about as dry as Baghdad.

Odebrecht, who built the project, are pumping billions of gallons of water into fields leased by agricultural companies over a 170-square mile (440-square km) patch of desert in the northern Lambayeque region, known for its Algarrobo trees with roots that stretch up to 164 feet underground to find water.

Peru has long struggled to manage a natural water imbalance that climate change could soon visit other nations: too much water in some places and not enough in others.

The coastal region west of the Andes range, home to two-thirds of Peru’s population and 80 per cent of economic activity, receives just 2 per cent of the country’s freshwater.

That is because the towering Andes catch rising warm air in chilly mountain peaks – forcing moisture to condense and drain into the jungle and casting a long, dry “rain shadow” over coastal regions to the west.

The lack of water in regions along the coast already places a “totally crushing” burden on Peru – South America’s fastest-growing economy, said Jorge Benites, the conservation director for the national water agency.

Water has defined life on Peru’s coast since pre-Incan times, with power accompanying those who control it.

Before extreme weather and droughts marked its collapse in 800 AD, the ancient pyramid-building Moche civilization thrived along the northern coast of Peru for some 700 years, thanks to a surface irrigation system that used seasonal rivers to soak fields of corn, bean and peanut crops.

For many local farmers, irrigation in Olmos hasn’t changed much since the time of the Moche. While some can afford to pump groundwater to their fields in the long dry season, others had to wait for the Olmos River to swell after brief downpours during the rainy months before rushing to dig out irrigation paths with shovels.

Odebrecht estimates the Olmos irrigation project will create about 40,000 direct jobs and another 120,000 indirect jobs – so many that a team of Peruvian architects from different firms designed a new city to house the newcomers.

Inspired by the Moche, it would rely on adobe structures that would create shade and harness winds to cool residents.

“This whole Olmos experiment is like what the Moche did thousands of years ago. They conquered the desert through irrigation and built urban centres,” said Jose Orrego, an architect with the Metropolis firm in Lima. “The idea was very seductive.”

Engineers say Olmos is the most complex and risky project they have ever worked on, with hot and stuffy conditions inside the mountain requiring air conditioning and unstable geology outside that has caused at least two slides.

Construction on the tunnel was finished in late 2011. By 2015, enough water to fill 160,000 Olympic-sized swimming pools (400 million cubic meters)  started moving annually through the mountain, powering a small hydroelectric plant.

The project has been a dream of engineers and politicians since the late 19th century, well before worries arose over global warming. It languished over funding issues until 2003, when a decentralization push moved it to the regional government in Lambayeque to work it out with the private sector.

Odebrecht eventually won the right to build the project, which has arguably taken on added importance as scientists warn that many of Peru’s glaciers could disappear.

“Lambayeque has a bright future, but to get there, we need more investment, and what will bring that investment is water,” said Humberto Acuna, the regional government president.

Odebrecht, the Brazilian company, plays a supersized role in Peru, building everything from highways to mining facilities and even putting up a smaller version of Rio de Janeiro’s famous Christ the Redeemer statue over Lima’s coastal skyline.

To pay for the construction of the Olmos project without government funds, Odebrecht said it asked investors to bet on the future flow of water that would feed crops. It auctioned off idle public land to agricultural companies for half of the financing and sold debt based on future water sales to those companies for the rest.

“For this to go forward, the stars had to be aligned,” said Jorge Barata, the director of Odebrecht in Peru. “The novelty of the financial structure created some doubts in the beginning.”

DOES TURNING THE DESERT INTO A GARDEN WORK?

While the plan is to keep moving water from east of the Andes to the coast, the Peruvian government’s appetite to do so with business models like Olmos may be waning.

Odebrecht said it had agreed to make water available for 5,500 hectares (13,590 acres) of community parcels and will offer it at a rate below what farmers now pay to pump groundwater.

An essential global miner, Peru has more than tripled its agricultural exports over the past decade, according to the Agriculture Ministry, using its good year-round climate and around 19 free trade agreements to meet global demand for high-priced crops like asparagus.

Still, watering Peru’s coastal regions to keep growing agricultural exports has its own risks. The El Nino phenomena that periodically warms the Pacific and stir up destructive rains have the potential to wreak havoc.

The project was built by the Brazilian firm Odebrecht, which is under investigation in Peru after acknowledging paying bribes to secure contracts for other infrastructure projects. The state was supposed to have assured that water is set aside for more than 620 families growing limes, mangos and other crops on 13,500 acres, according to the Lambayeque state government and the Agriculture Ministry in President Pedro Pablo Kuczynski’s administration.

But so far, only about 2% of that terrain is irrigated as officials in Lima and Chiclayo, the state capital, blame each other for delays in building infrastructure to deliver water. The state’s governor, Humberto Acuña, says the project for small farmers is being held up by officials in Lima. The Agriculture Ministry is waiting for the government to finish a feasibility study before working with the state to secure financing to expand irrigation.