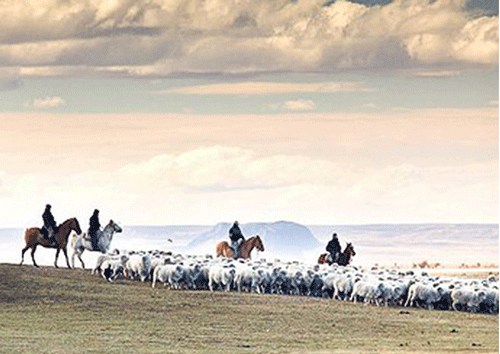 Gateway to South America on 20/11/2018 - 18:35 in All categories of countries are, Argentina-General, Argentine farms

Sheep production represents an important role inside the Argentine agriculture system. By the end of XIX century, Argentina had 74 million sheep, but that number has decreased over recent years. The reason for this reduction has multiple factors, but the most important during the last few years is the increase of the guanaco production (similar to a lama) and the increase of wild dogs in Argentine’s Patagonian.

But even though there are many adversities some people still bet on the rising of sheep. Juan José Maglié is part of a 3rd generation family that raises sheep at Estancia Los Petisos, located in the area of Pampa Alta, in the province of Santa Cruz. The Maglié family has raised ovine since 1928. Right now they have around 3 thousand head of Merinos, and some Corriedale, taking into account that the sheep production of this type has a double purpose: meat and wool. “The idea is to have a big Merino, and cross 10% Corriedale to increase their size¨ Juan José explains, in dialogue with www.eFarmNewsAr.com.

At the farms located in the center of an area called “Pampa Patagonica”, depending on how dry the area is, the average farm is 20 thousand hectares to make it a productive unit. If the index of dry matter is very high then you should raise Corriedale. But if the index is low then you should raise Merino since it requires less amount of space due of the size of this breed.

At Los Petisos farm, during summer, the cattle stay at the higher fields where there is a larger amount of dry matter. And during winter these fields are covered by snow, and for that reason, they have to move the cattle to a place where they can protect them from the snow, with less dry matter, whereas the fields are not completely covered with snow so the cattle can feed themselves during winter.

It is important to have a good infrastructure and to respect the time for every job with the cattle so you can have steppe better breeding, and the less amount of animal losses. Health, water, staff and administration, they are all key to be an efficient administration¨ says Maglié, and adds that four legs predators (cougar, fox & guanaco) and the lack of trained staff are still problems that affect this activity. And finally, Juan José points out that the sheep producer business needs to be for long-term due to the odd poor year.

The lamb production in the country it´s almost entirely for the internal market for almost four years now. The reason for this is the drop in international prices. Sheep meat production is less important than the value for the wool, and the primary consumers are the families that live at the farm. In Argentina, 80,000 producers have around 15 million sheep.  85% of those producers have less than 100 animals on mixed production systems or they are just part of a small family agriculture lot. However, in the Patagonia steppe, where they raise two-thirds of the country sheep on a monocultural extensive way, more than a third of the producers have more than a 1000 sheep herds.