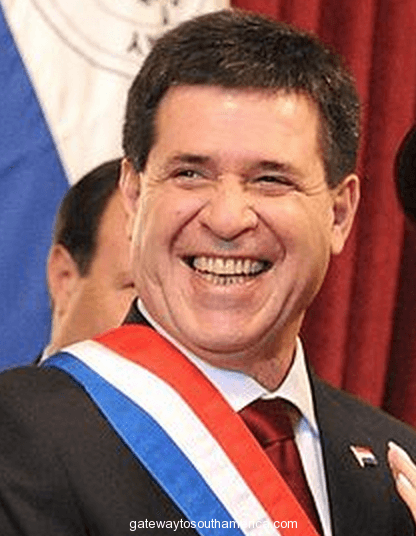 Multimillionaire Horacio Cartes made a play for more foreign investment on Thursday as he assumed the presidency of impoverished Paraguay.

“I’m not in politics to make a career of it or become wealthier,” the 57-year-old Cartes said in his inauguration speech, promising to strengthen Paraguay’s international relations and its commitment to human rights. “I’m in politics to serve my people, make the future better for new generations and build up our identity as a free, independent and sovereign people.”

Inaugural organizers said Cartes’ most important encounter at the swearing-in was not with fellow presidents but with foreign investment executives he hopes will invest in the infrastructure of this country of 6.2 million, where 39 percent live in poverty.

Wearing a red-white-and-blue presidential sash, the tobacco magnate said he intends “to win every battle in the war we’re declaring today against poverty in Paraguay.” The country is among the most unequal nations in South America.

Cartes, whose term runs through August 2018, built a family fortune with two dozen companies that dominate industries from banking to tobacco to soft drinks to soccer, making it difficult to make a move as president without generating complaints of conflicts of interest.

Paraguayan voters overlooked the allegations, focusing on hopes that the businessman from the dominant Colorado Party can help the country benefit more from soy profits that are projected to boost the economy by 10 percent this year.