BBVA Research has confirmed its estimate that Paraguay will grow by 3.1% in 2016. The Government of Paraguay also maintains the same expectation of 3.1% this year. If maintained, the trend will show Paraguay to be the third fastest growing economy in the region this year.

Juan Ruiz, chief economist at BBVA Research for South America said: “In Paraguay, we maintain our growth forecasts unchanged for 2016 (3.1%) and slightly revise downwards for 2017 (2.9%), due to delays in the beginning of some emblematic works of infrastructure – airport and routes 2 and 7.” 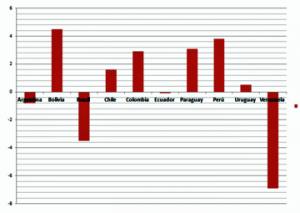 Within projections, BBVA Research estimates an average drop of economic growth in Latin America of -0.9% in 2016 and maintains a positive projection of gross domestic product (GDP) of 1.8% for 2017.

This negative average figure for the region is explained mainly by the disastrous performance of the economy in Venezuela, which is in outright recession, with economic deceleration estimated for this year of -6.9%.

Another poor-performing economy is Brazil, which, given the internal political problems, has an estimated -3.5%. This figure is up for review in the coming weeks, once the Olympic Games business impact on the re-conquest of investor confidence has been assessed.

With the impetus of infrastructure, Paraguay will grow by 3.1% in 2016

With regard to Paraguay, the representative of BBVA maintains its forecast of 3.1% GDP growth, confirming its previous estimate; it will be among the top three economies in the region this year.

From the perspective of the Pacific Alliance – Mexico, Colombia, Peru and Chile – the average expected growth will be 2.7%, in contrast with negative growth in Brazil, Argentina and Ecuador. The Alliance has been successful in maintaining sustained and homogeneous growth.

Regarding Argentina, there is a -0.8% projected update; but the apparently low figures are not as low as at first sight it seems, but, rather, reflect a transparency of economic indicators, which in one year will reach, not reverse, a long history of figures that have been unclear in this regard.

On the contrary, according to the BBVA, in 2017 Argentina, Paraguay, Colombia and Peru will be the economies with the highest GDP growth figures.

On the other hand, the weakness in confidence indicators, mediated by political problems, has influenced the growth of the region as a whole. Also, a widespread issue in the region is the lack of dynamism in the labour market, expressed by the representative of BBVA.

Expectations, although very positive for Paraguay, Bolivia and Peru, are slightly lower than initially projected in the previous year, mainly because the growth of investments has been somewhat slower than expected.

Miguel Mora, the chief economist of the Central Bank of Paraguay, said that commerce is rising, and a greater inflow of foreign exchange from tourism at the borders, especially with Brazil, has been observed.

In addition, Carlos Fernández Valdovinos, president of the Central Bank of Paraguay, said that the observed dynamism and decrease in the downfall of Brazil is already reflected in higher revenues in Paraguay.

The consultant BBVA announced a general rise in the projections for 2017 with regard to the neighbouring countries of Paraguay, which necessarily will positively influence Paraguay’s GDP the following year.

He also stressed that the priority that Paraguay must have is prompt attention to concretion of the infrastructure as a prerequisite for sustainable development of the local economy, and as an indispensable factor in the concretion of foreign investment.

The road and port works will allow Paraguay to be more competitive in the export of grain production, as well as industry beef premium, a high growth industry over the past decade.

In the same vein, the economic analyst Amilcar Ferreira concurred with the data of the BCP adjustment of GDP from 3.0% up to 3.5%, and also indicated that substantial macroeconomic improvements for the fourth quarter are foreseen.

Do you want to know more about Paraguay? Then read some of our other Paraguayan posts.