Paraguay – One of the worlds largest exporters of Soya Beans 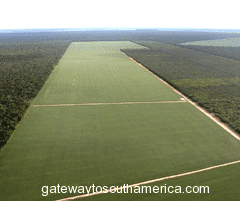 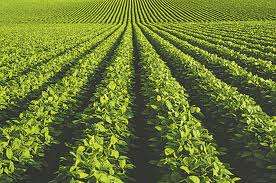 Paraguay is the world’s fourth biggest exporter of soya, a crop that has been dubbed “green gold.” Its harvest – likely to reach a record 9 million tonnes this season – is mostly shipped as raw soybeans to the European Union, where it is used in cattle feed, or to Argentina for the manufacture of biofuels. More than three million hectares of soybean are currently sown in Paraguay, nearly triple the area than in 1998, and agricultural exports will account for the majority of the country’s predicted 13 percent GDP growth this year.

Most of the new agricultural land comes from pastureland in eastern and southeastern Paraguay as well as in the northeastern provinces of San Pedro, Canindyú, Caaguazu, and Concepción. Some soils in the regions are better adapted to soybean production than others and the soils vary in water-holding capacity, soil tilth, and organic matter—needed factors to allow crops to produce well in the heat often seen in the middle of the dry summers in Paraguay.

Soybeans are utilized in-country, mainly in feed rations for the pork and poultry industries. A limited quantity of soy oil is used to produce biodiesel . In the past few years, however, the soyabean crushing capacity has more than doubled in Paraguay.

Earlier in the last decade most of Paraguay’s soyabeans were exported as whole beans, but by next year more than half will be processed in-country and exported as meal and oil. The increase in crush capacity has grown due to two new, large crushing plants recently completed by ADM and earlier plant development through joint projects with Louis Dreyfuss, Bunge, and Copagra (CAIASA) which are now operating at full capacity. The new processing infrastructure continues to boost soyameal exports from Paraguay, creating a continuing demand for more soybeans to feed the processing plants. Grain terminals, too, in Paraguay are considering infrastructure improvements, so that loading soy exports can become easier.

Since the induction of President Cartes in Paraguay in April 2013, the agricultural sector has seen boosts to agriculture. The new law for allowing public-private alliances (APP) has allowed an expansion and improvement of public infrastructure. A project currently in the works is the dredging of the Rio Paraguay. This project aims to attract investment to widen and dredge the river to make it more accessible and navigable throughout the year.

Due to being landlocked, the Paraguay river systems—the Paraguay and Paraná rivers especially—are one of the major means of freight transport. With 84 percent of the Paraguay soy exports transported by river, increased capacity of the River Paraguay will allow more regular-paced shipments and reduced shipping costs while improving export potential for the country. Usually, the River Paraguay is navigable up through Asunción by vessels of up to 11 meters draught, but in 2012 when dry conditions lowered the river’s depth, importers and exporters lost about US $250 million in potential revenues due to navigation problems.

Besides the government’s use of APP to boost the agricultural community investment in infrastructure projects, Paraguay recently eliminated the export tax on soybeans of 10 percent, replacing it with a value-added tax of 5 percent on the sale of all agricultural products as of January 1, 2014. This tax change will encourage more agricultural production in the country to flourish, including soybeans. Also, if an agricultural product is processed, a 2.5 percent rebate is offered to exporters, giving a further incentive to the agricultural industry. With strong economic growth projected for Paraguay, agriculture is gaining ground and clout in Paraguay while also boosting the soybean industry.

Figure 1. Potential expansion of soybean production in Paraguay is based on soil suitability and regional adoption of the crop near terminals and ports.