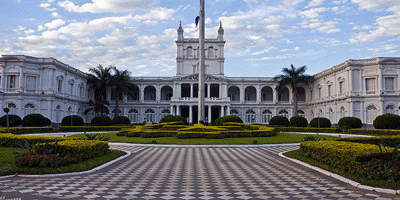 Paraguay has a simple and serious message

Backed by rising growth rates and successful capital market deals, Paraguay is telling the world it is very much open for business.

After spending some time in Paraguay, business travellers (whose numbers have been increasing in recent months) may be struck by two thoughts. First, the country’s opportunity is considerable: it is blessed with rich farmland and a climate that aids agricultural productivity with an average of 310 days of sunshine per year; it has abundant (surplus) and low-cost energy; and it has a favourable demographic profile. Paraguay also now has a pro-business government that is lowering taxes and bureaucracy and building on the country’s recent stable macro-economic track record.

Even the longstanding challenge of its geographical position in the centre of Latin America – it is landlocked – is becoming a strength, or at least less of a disadvantage. The Brazilian territory near the border has been transformed by new agricultural development and accompanying logistics have aided Paraguay’s regional integration. The country’s waterways offer cost-efficient export and import of goods. To the west, a passage to Chile through Bolivia offers a Pacific port, facing growing export markets for what Paraguay does best: produce commodities, and food in particular.

The second thought is: why hasn’t this potential been developed before? The country has an atmosphere akin to that of a ‘start-up’ business. Paraguay first tapped the international capital markets in January 2013 – and the deal was an exceptional success, with investor demand outstripping supply 11 times. This year it went back and added a liquid 30-year benchmark that priced inside its ratings peer group. But why is this momentum only becoming apparent now?

Ultimately, the inertia of the past is only really pertinent if its causes are likely to be instructive to the country’s future performance. A mix of shirt-term policies, mismanagement, corruption, insecurity and a lack of the rule of law (Alfredo Stroessner’s dictatorship lasted 35 years, until 1989), previously prevented Paraguay developing its prestigious natural gifts. GDP per capita in 2013 was just $6,823 – poverty and the lack of social inclusion is a serious issue. The country’s logistics infrastructure is old and a hindrance to new growth while current investment rates in relation to GDP have been low, albeit increasing in the past decade.

But things are changing. Firstly, the country has already been growing at a rapid pace since 2003 – bankers and businessmen talk of old and new Paraguay’s, which are separated by that year. The old Paraguay had annual GDP growth of around 1.8%, the new around 4.8%, thanks to the introduction of sound macro-economic policies and management. Secondly, the Cartes administration, which began in August 2013 after the elections in April 2013, has wasted little time in addressing systemic weaknesses that have continued to hold the country back. Horacio Cartes, a successful billionaire businessman turned politician, is reforming the country to increase its attractiveness as a business destination. The president’s vision is to reduce poverty through job creation. The first year of his administration has been focused on creating the conditions for capital and foreign direct investment to flow in to create business, jobs and wealth. At the same time, local businesses are also receiving greater financial support and are benefiting from more business-friendly regulations.

Most important however, is the country’s ambitious infrastructure programme which envisages $16 billion of public and private investment in the next four years. This plan is central – and crucial – to the aim not only to develop the construction industry but also to enable all Paraguayan industry to increase productivity and competitiveness. The scale of the programme, which covers road, rail, river and airport improvement projects, will present significant implementation challenges, but a new public-private partnership law, among others, is creating the necessary transparency and financial conditions for effective management and oversight.

Already investors are taking notice. So are the rating agencies – all three leading agencies have increased Paraguay’s rating and/or outlook. The international bond deals clearly show institutional investors’ positive views and the authorities have been quick to use the deals’ successes as part of their marketing efforts, which reinforce the message that Paraguay may be relatively small and landlocked, but it is ambitious and at the heart of the continent. In an interview with Euromoney the governor of the central bank, Carlos Fernandez Valdovinos, clearly articulates why Paraguay is intent on presenting itself to the world as an open, business-friendly Latin American market.

“With the changes in global financial conditions, the amount of money available for emerging markets is going to be lower,” says Fernandez Valdovinos. “We need to fight to differentiate ourselves, to show to everyone that this is a country where there is no discrimination against foreign investors and that ideologically we are not against businesses coming here and making money. We have so many needs and we know that we need to be aggressive in attracting the human and financial capital that we need in order to ensure that Paraguay grows at a rate that enables it to meet its considerable potential.”